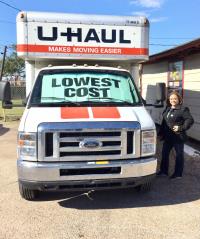 The drop address wrong and they don't answer the phone we end up leaving truck at another uhaul nearby!

Very nice lady checked us in in a timely manner and got us on our way.

Uhaul was in good condition when it was drop off. If you may have any questions please feel free to call me. Contact number# 256-565-9089 Email: doveysalas@yahoo.com

The left lights did not work. The lady at the desk did not know what to do because she had not been trained in what to do. I hooked up the trailer and pulled it over to the U-Haul dealer on North Main and they checked out the lights, tried to replace the light, then switched out the trailer with another one that was ready to go. The guys at the Main Street dealer were great and went above and beyond what I expected of them. I dropped off the original trailer at the Main Street location when they traded trailers and returned the one they gave me to the Park Street location. I'm not sure what this drop off on Hwy 3 is all about. That wasn't me.

The store was not ready for us. Items such as furniture blankets were not available even though they had ample time to make sure they were stocked I don't believe UHaul rentals are the primary business of this store.

Do not short your clients on allowable mileage. We were not given enough miles to get the truck, bring it home, go straight to our new home, bring to drop off location without going over and being charged.

Karina was so nice and personable!

Person was not very helpful, confusing and unprofessional. We originally asked to pick up from an actual UHaul dispensary, but were redirected to a lot that was difficult to park a normal car in, much less drive a truck with an unconnected auto transport off of. The transmission on the truck is also going very badly.

When I arrived the 4 ft x 8 ft was waiting for me. It was the only trailer on the lot. I didn't have a ball so the young lady who helped me directed me across the street to an auto parts store. Problem solved. The young lady was the only one available to help me and even though she was dressed in office-appropriate clothing she moved the trailer to my hitch and hooked me up and checked my lights. No problem. I hope her Boss knows that she is a treasure!

Limited hours of operation. Have longer hours and open on Sunday.

The woman working here was very sweet, but could not physically help remove the trailer. Thankfully, she called her husband and he was able to come help.

The gas empty light was on upon picking up the truck so I had to go straight to the gas station but as I was given a $42 gas credit for a quarter tank I figured it was fair. The lift gate was open and there was standing water in the back of the truck that wasn't completely dried by the next day.

The girl who put the utility trailer on did not know what she was doing and did not properly put the hitch on my truck. It came off my truck when I pulled out!!! Fortunately it did not injure anyone or damage my truck when it stopped. She also forgot to put the dolly I rented in the unit and I had to get one for another location. She also did not review options with me and I ended up paying $40 more by doing a "one way" instead of a local. In addition, she told me I could leave the drop off location open, which apparently is not possible. So, a random drop off location was assigned and it was on the opposite side of Houston from where I am. Terrible experience.

Remove and move your own equipment. Take the customer's information, and deal with internal issues after customer's speedy departure.

Young lady was as helpful as she could be, but was working by herself and trying to run two different businesses.

additional charges were not explained even after making complaint.

My concern was really not the location. My concern was the online reservation. I picked one location, to be picked up at 5:00 pm. I received an e-mail confirming the time and location. I received a phone call that morning that I was supposed to pick up the trailer at 10:00 am that morning at a different location. After discussion, they told me I could pick it up at 5:00 pm. Later I called to see about changing the trailer size and they told me I had to pick it up at 4:30 because they closed at 5:00 pm. Luckily I found that out by accident. Lastly, all the information I filled out online I ended up having to give that same information when I picked up the trailer. What's the point of pre-registering?

When I called the office I asked for the smallest truck that U-Haul has, because I was moving a small amount of furnishings for my daughter. The lady told me that she had a 10' truck available for the day that I wanted to lease it. She said that her hours were from 9 am to 5 pm and that I could pick the truck up at either 9 am or 9:30 am. I arranged for my daughter to have her furnishings ready by 9 am so we could pick up the truck at 9 am and load her furnishings and be on the road by 10 am. this would let us get through Houston' traffic before lunch and miss a lot of trouble. We arrived at the location to pick up the truck at 9 am, we were told that the woman who runs the place would not be there until 9:30, so we went for breakfast and came back at 9:30. The lady showed up at 9;45 am, and was late because she wanted to make cupcakes for work. I then had to let another woman turn in her truck and listen to several insurance customers in Spanish, then finally it was my turn. I was told that the only trucks she had were 16' trucks, which was twice as large as I needed and had to pay extra for gas because of the size of the truck. When I got in the truck I had to remove trash, and put the panel that was suppose to be on the motor covering, before I could start driving the damn thing. I was about an hour and half late and when I got to my daughters appartment and opended the back, the cargo area had a smell that almost made me take it back to the office and ask for another one. This would have made me even later and the woman told me that I had to turn the truck into the Bryan Texas office by 3 or 3:30. It is a two hour drive from Baytown Texas to Bryan Texas, and I picked up the truck around 10:45. This left me three hours to clean up the truck, load my daughter's belongings and drive two hours through Houston's most congested road (HWY 290) and unload and drop off the truck in two and a half hours. This is not the first time I have been greatly disappointed in the U-Haul services in Baytown. I have on three other occasions used U-Haul, and I promise you that this is absolutely the last time I will. I have given your company three chances and on every occasion you have failed, and failed misserably. The last time you cooled me off with a $50 reembursement, but please save your money this time. I will tell everyone I know that you are not capable of correcting the problems you have, and I don't even think that you are even trying to. If you have any business sense, you will send someone down to this particular office and see what you have, and I wish you would call and reserve a truck from this or the office on Main St in Baytown and see what is happening to your business' name. I have not heard of one good review from the people I have talked to about your company in Baytown.

The people were very friendly at both pick up and drop off! Excellent customer service!!!

I did not check truck and pulled out uhaul parking lot.Good thing my brother behind me I had a torn up tire the uhaul rep girl very unprofessional she did not know how to work uhaul website to help me had to call other people.she also had to answer phone for her insurance,clothing shoe store phone. She kept saying she had to close lot.went to Main Uhaul store was treated very professional was given a bigger truck being they didn't have the size I purchased he was very apologetic and had me on my way very quickly be knew exactly what he was doing. The only thing was I had purchased a dolly at park and main didn't have o e for me

This is not an actual drop-off location. There really are no personnel besides the two ladies there to help load or unload anything. I believe their businesses more centered around doing repair work on equipment. Very nice people however. More than willing to help if able.