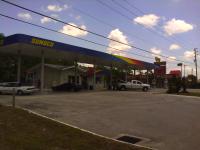 Like going into a filthy service garage. No COVID protocol in place, no safety glass for the worker. Attendant did not where a mask but did have gloves on.

I was a little wary after reading some comments and reviews, but this location served us very well. We needed the uhaul in the early morning, and he allowed us to pick up the truck the day before, with no extra charge.

I would never ever recommend this place to anyone for any service. The mechanic guy was rude. It was Sunday and we expected that the office is closed so we can just drop off the truck at the site and leave the key in the box as per instruction. It was 8 pm and he was there and he told me," I thought you were coming at 4 pm." He made it appear like I had to freaking ask him to stay that late. (Common sense). We got the promo for $58 for a day, but he ridiculously charged us $55 plus tax for being a few hours late in returning the truck that same day. The lady agent in Nanaimo told us we can actually return it same day even at night without extra charge. The important thing is no damage and the truck has to be there before office opens in AM. He could not understand that there is a $150 rental deposit fee. He had to read the paper and computed several times too. He was not accomodating at all as he argued about the price. The office is very messy and dusty. I am sorry but this is the worst rental drop off location our family has ever been in our lives. I have also never met such an arrogant guy in BC so far. I will put in a bad review about this location and spread the word to everyone we know. This is the only time I have ever put in a negative review online. I would respectfully suggest if you could please review and investigate this location as we all know that U-Haul has a very good reputation and this location will ruin such a good company. Thank you.

I told the counter attendant I wanted a one way to Vernon BC, he booked me a one way from Langley to Langley.... Place looked like a crack shack

on July 16, around 1:30 pm we arrived to AAA Electric located on Fraser Hwy in Langley BC Canada on Fraser We (2 old people) came to rent uhaul vehicle trailer which was reserved earlier online under R.W. Baljit (the owner) which appeared to be an Indo-Canadian, gave us attitude from the start. He was visibly ticked off at the whole uhaul thing. "I won't rent to you because I earn 120$ per hour and I don't have time to do that" "why don't you call towing company instead" He look really hard for excuses NOT TO RENT the trailer "I won't rent to you because I don't believe that you have a vehicle to transport" "I won't give it to you unless you satisfy my doubts" and on and on and on. . He made us send copies of registration papers, owner's driving license (the vehicle to be transported was in Surrey and the owner was at work in another city so we had to scramble for both) He insisted that the vehicle must be insured (which it was, but is it really a requirement for transport?) Then, he looked up Mr. W's address as shown on DL on google earth and made disparaging comments about his residence. Then, Mr. Baljit demanded "employer's phone number" of Mr. W claiming that he needed to verify with his employer â€¦ what exactly? Mr. W complied with this unreasonable request as well. Then Mr. Baljit demanded MY phone number, which I refused to give to him. (I was not a driver not a customer, just tagged along with Mr. W). When I used my cellphone to call my daughter he assumed I was calling uhaul to complain and laughed sardonically "they won't help you, they will just run you in circles, and I don't care". When I stepped outside he told Mr. W that I was being difficult. In the end he spewed anti-Semitic abuse against Mr. W. (" you are Jew?! blah blah blah..."). We complied with all his requests and tried to keep our mouth shut but we were extremely upset by this ordeal. If it weren't the only vehicle trailer available in the 50 km radius, we would have walked out after the first 1 minute but instead were forced to endure the abuse for around 35 minutes. I don't care what kind of electrical talents he has, Baljit is an abusive person. We understand that Mr. Baljit might have no financial incentive to rent your vehicles given his high income as a mechanic, but UHAUL is ultimately responsible for actions of their agents. They Enduring racist and antisemitic abuse should not be a requirement for renting uhaul fleet.

Very helpful. Will use again and highly recommend to everyone.

Was a very stressful experience as when The trailer was picked up noticed that the tires were bald. Which left me wondering about a flat (which there wasn't a spare) and more importantly a blow out on the highway.This I believe is no fault of the location.

great customer service. Man was very friendly and helpful. Was a pleasant experience.

Have the correct equipment that is ordered online, when customers pick time for pick up don't have the system change it, twice. Online I booked a 20 foot truck and we arrive to pick up to find out it's only a 10 foot which the first location couldn't already offered us instead we pay more money in milage to get the truck when we needed the bigger truck that we had orongqlly ordered. I will NEVER recommend uhaul to any friends or family. I will make sure I share my experience through social media because I'm shocked and disappointed with the service I received on what's suppose to be one of the best days moving into your first home.

The dealer could be on time and listen to what the customer is saying and give them ALL the information. Also it is necessary to print out the entire contract correctly so the customer can see what she's signing. All of this did NOT happen and so I signed my name when all that was given to me was half of the information. Completely unacceptable. I have contacted the customer service with no response.

This location was not the original location agreed upon. The lighter/usb/electrical outlets for charging a cell phone were not working. There was no electrical door locks. The actual location did not look like a U-Haul operation.

Worker was very rude, didn't help in anyway. Location was not clean or very accessible. Small, very hard to get truck and trailer pulled in.

Trailer was great no issues pulling, everything worked no leaks in all the rain we drove thru Thanks

All Good, only could have some more supplies.

The UHAUL sign is painted silver for some odd reason and cannot be noticed unless up close to it. I passed the place but then turned around and turned into to it guessing if it was the correct place to return it to. Get a new sign!

Baljit went above board helping make my IHaul experice wonderful

This truck was at a auto dealer. Kind of hard to find. More signage would be good.

Where I finally picked up a truck in lake country good service. Service from manager and another girl at Enterprise went over and above to help me. Otherwise uhaul experience and phone staff were horrible . The fact that i reserved a truck one month in advance and the runaround I got gives uhaul a big fat ZERO .

I was not impressed that it was going to cost me $35 to rent in-store vs the $14.95 online. I had to go to my car, use my phone to book it online and then do the check in online. It still took about 20 min to get on the road. I then went inside and paid $16 (incl taxes) They also don't tell you that if you have road side plus in BC you don't need insurance... I called ICBC to make sure. I returned the trailer at 4:45pm closing time was 5 pm. There was no one there. Glad I hurried back across the border - NOT!