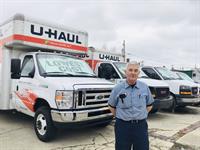 U-Haul in general offers terrible customer service beyond the control of Billingsley. Very inflexible. Had medical emergency during travels and could not amend contract without paying double the normal fee. I would not recommend U-Haul in the future.

I had a very hard time getting my reservation, took me over an hour! But I want to thank very, very much to Mr. Billingsley, who came through and noticed that I was trying to get my reservation! I love him!! He stayed with me , even though the business was closed on this day, and made sure I got going!!!!!!!!!!! Thank You Sir!!!!!!!!

Overall very satisfied. Due to pandemic we picked up/dropped off by phone app- VERY easy & quick. Truck was clean. My only complaint was a call we received 4 days before pickup telling us they couldn't accommodate the 26'truck we reserved through UHAUL.com 6 weeks in advance for 3 days for a house move. Evidently reserving Online shouldn't have let us book for 3 days & they could only give us a truck for 1 day- the day BEFORE our house closing. James, dist. Mgr. made it right, found a 1 way truck & thankfully we successfully moved in the 3 days we needed it.

Its way too expensive. Especially during covid when people are laid off. But, you see an opportunity to charge more money since some people are moving out of bad states.

Outstanding organization at Billingsley. I appreciate the customer service and assistance from all.

I reserved a cargo van 1 week prior. I know that reservations don't guarantee the rental that said Uhaul sends me a text less then 24 hours before I was scheduled to pick up my rental saying they canceled. Couldn't one of their representatives have had the courtesy of at least calling me to notify or try to help me arrange another rental? Of course not, waited let's wait till all locations were closed for the day to send that text... nothing like wasting the next 2 hours on the phone trying to reserve another rental, 45 minutes of that was being on hold. Finally reserved another rental only to have to drive 35 further miles to another city to pick this van up which added a total 70 miles to my mileage. Inconvenient and Incredibly frustrating!!!

This place was awesome, they went out of their way to help make sure everything was ready to go. My truck included the pads, dolly and furniture mover I needed. When I rented the trailer two days later they made sure everything was working and showed me how to hook everything up. Tom even fixed my trailer hitch, adjusting it to go up instead of down to make the load more balanced. For improvements, the main thing would be to fix the automated check in process. Nothing worked, it was HORRIBLE. 90 minutes of failed software, phone calls to confused people who were supposed to "vouch" for me, (what is that about?). Let people know they need to take pictures of their drivers license and face. It should be done before you get to the rental site. Mobile check in is AWFUL. Will NEVER use that again.

They would not enter my drop off location. I provided them with an address less than a mile from my apartment. They told me that I could drop it off at any U-Haul. After I left, I received an email assigning me a drop off spot in a trailer park in a different town.

The lady who checked me out was very nice. I'm still furious about the terrible online pick-up but the drop off was fine.

The only issue was when I dropped off the vehicle and tried to upload a photo of the odometer reading the system would not take the photo - kept saying I needed a more recent photo.

We had to drive to Decatur to pick up trunk from Springfield, IL. Clerk tried to charge us $200+ instead of $179 for rental and double for the insurance. Good we had copy of our agreement. Her comment Oh we had a price increase

I appreciated the friendly and accommodating customer service. Easy pick up and drop off.

Keep up the good work!!

Be more inviting when customers initially walk into the office. For example, start the conversation with â€œHello! How can I help you?â€ rather than waiting for the customer to tell you why they're there.

Absolutely Helpful and Friendly location, will use again and recommend to everyone

Personnel at the drop-off location parked the rental and brought my vehicle back to me. They corrected the paperwork that was not done at the pick-up location.

I've rented from this location many times. Friendly service in a convenient location. Thanks again!

Location and garage owner were fine and quite helpful; however, overall Uhaul experience was a nightmare. We arrived an hour later than planned, Uhaul rep closed at noon; so our keys were placed in the 24/7 lockbox. After an hour of attempting to access the lockbox via the online app (including speaking with 2 reps), we had to leave in order to make our scheduled appointments. Returned at 2:30, attempted to use the app again and were told our truck would be ready at 3:00 PM. Garage owner had the key but was unable to "release" the truck on his system, Sat around until 3:00 and then finally someone at Uhaul was able to release the truck. Phone app is ridiculously cumbersome, requires photos of licence and driver, even though I had previously uploaded my license when I made the reservation. Even after the system sends code to your cell phone, a Uhaul rep could not tell me the lockbox combo. If banks can do it, Uhaul should be able to do it. Overall, a frustrating, terrible experience. But wait, there's more . . . . we had to return the truck. Another colossal waste of time and poor communication.

MY RELATIVE DROPPED IT OFF.

They were very helpful.

I am planning to rent another truck in a month to finish my move, I was wondering if there is any discount coupons available. Thanks

These people were also great and attentive.

Make sure your self pick up works. Tried it for about 10 minutes and had no success. Went inside and was taken care of in about a minute.

Great Customer Service! Friendly and helpful staff, will use this location again

My favorite UHaul place ever!!

Fabulous location! Friendly people, will use this location again

Inspect trucks better before releasing them to be rented.

Staff is always helpful and friendly

Even though your trailers are fairly lightweight they have a huge amount of wind resistance. You should consider a bit of triangle shape to the nose in future designs.

Very nice people to deal with.

Speed up the check out process

Outstanding customer service at Billingsley. I feel like I get personal service each and every time I rent from them.

The two persons were very helpful. I was in and out in no time at all.

This site was extremely busy. There was only one person checking clients in for their trailer pickups while the other worke just stood there as they only had one computer. The computer stalled multiple times and the gentlemen checking me in had to start over a few times. The equipment was very nice and worked well though.

Was good. The mobile app was hard to upload photos without wifi

As always, the folks at Billingsley were helpful and efficient in getting me on the road.

This is the second time we've rented from this location. The staff is kind, professional and accommodating. We will continue to rent here in the future.

U-Haul agent and staff were all very friendly. Process was quick and pain free. Would definitely use this location again.

I love to rent from this place, they are very nice people and they treat you right