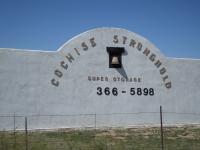 There was a lot of confusion regarding the drop off at Hereford,AZ. My reservation was to this site. The contract was issued to Douglas location, not to the reservation site, I had requested as he was completing the contract. I only saw the new drop off when near Hereford. Douglas is a 45 mile drive instead of a 20 to drop off. Called U-haul to confirm I could drop off still at Hereford. It was approved. I did online check-in. The next day the Hereford sure called and stated they do not accept drop offs. As the woman was gone from drop off spot all day, her message was confusing and worrisome. It was a huge mess and completely unprofessional. I doubt I will use u-haul again.

Yapping dogs...office is part of her home??? Grumbling the entire time we were there and took way too long!

The lady that helped me was great.

Thankfully the Herford location called me on 10/24 to tell me I was late and was way more help than your alleged customer disservice. Still not a word from them. Iâ€™m not positive but it sounds like you fine folks charged me another $40.00 for an additional day, even though you were the ones that screwed up and sent me to a location that couldnâ€™t wouldnâ€™t take a trailer return. If so I want my $40.00 back. You also claim to have sent me an email stating I needed to a different return location. I never saw the email, I was on the road with no internet service. But after I got an internet connection on the 23rd there are three emails on 10/15, Two are conflicting. Buried in the body of a subpage of the U-haul order is the Herford location. Too bad the contract is the contract and takes precedence over correspondence, the contract reads Bisbee as the return location. You have my phone number. If you canâ€™t find it call Cochise Stronghold Super Storage in Hereford she has it. Thank you so very little for wasting my time, my fuel and my patience. I may send you a bill.

Karen was great to deal with. Very friendly and a pleasure to talk to

Everything was excellent. The customer representative was very nice with us. Good job Karen.

Price for a 2 wheel tow dolly is excessive! I only used it for less then 5 hours. A truck is $20 so why is a tow dolly $47? A lot less maintenance then a truck. A price of around $20 would be reasonable.

Karen was very accommodating and professional. She assisted us on her day off and we are very appreciative. Karen was very friendly and always concerned that our experience was a good one. We are lucky that she lives in this area.

Staff was awesome, process was fast and easy, will definitely be using this location again. Thank you so much!

Personnel went out of their way to make sure I was taken care of.

Thank you for your your superior service.

Poor handling of checkout experience. Didn't discuss all aspects of the paperwork. Couldn't provided a print out of all paperwork.

They were closed when we wanted to drop off the truck at 2:30 on a Monday afternoon.

Maybe a cold beer? Nah, they were great, Jerry and Joanne.

Great experience! The staff was excellent and extremely helpful! Will use again if I ever need to!

Good, friendly service. Equipment was flawless. No complications. Thank you.

thx for all the help

Great service at this location. Very friendly and helpful.

The staff at this location was the best I have ever worked with. Friendly, and fast. Top Notch is a perfect name for them.

TRuck was clean. While using it, we discovered that it leaks when it rains.

all my needs were met. thank you

paper work was not explained clearly. Truck had flat tire

Furniture legs rubbed on floor of trailer then marked up floors in house. Plywood floors would be better. Needs tie-down rings in walls instead of running rope through holes in wood strip to tie down cargo. A tongue jack would help.

The ONLY way to improve service at Top Notch in Ironwood MI is to fire the man who handles the UHaul's or else change to a different service provider. His writing is illegible, however, the wonderful gals at Maple City Glass in Adrian MI, where I dropped the UHaul off, agreed that in trying to decifer his signature, it looked like his first name may be Paul, but the last name was impossible to read. He failed to check the tail lights (right one was out) and he did not connect the chain...it was simply twisted around the hitch according to the gals at Maple City. When I went to purchase the piece that goes into my trailer hitch at Top Notch, he told me, a 65 year old woman, to go home and take a hammer and chisel and chisel out the part of the hitch that is on my car because it was corroded from road salt, etc. I questioned why he didn't provide that service since he sells the part that goes into the hitch. He said he normally grinds the 4 corners of the part he sold to me, but he didn't "have time" to do that. He has a grinder at the shop, but told me to find someone else to do it or use the hammer and chisel. He tried to tell me he didn't have anyone to do the grinding, although HE knew how to use the grinder because he began to grind it, but said it would "take too long" (it was closing time and instead of servicing his customer's, he wanted to leave). I was extremely stressed because I did not have access to a hammer and chisel and he refused to explain how to do this. He went on to tell me that I didn't know what stress is...and then told me about all the stress in his life regarding a mother in law who expects him to do her gardening after work and some stress he had 5 years ago. He could have ground the trailer hitch in the time he told me about HIS stress that I was not interested in. Another man came into the shop and he tried to talk him into grinding the hitch at his place of work! He had just come from work. It was nearing closing time and he just did not want to provide me with the service that I desperately needed and he provided. The man who came into the shop felt empathy for me and told me he knew a man who will do this at his house and provided me with directions, then followed me to make sure I found this man's house....and he doesn't even work for UHAUL!!! The day I picked up my UHAUL, the employee, Paul, came walking out of a room chewing on a sandwich and had lettuce hanging out of his mouth...it was his lunch time! So, if it isn't "time to go home, it's time to eat lunch" for this useless character. I had "words" with him regarding his treatment of me...telling a 65 year old woman to get a hammer and chisel and clean out the part attached to my car and it would only take me a FEW HOURS to do it...and then I told him to hook up the UHAUL so that I can get out of there. I was so angry with this man...there is NO EXCUSE in the world for that kind of service and there are many men out there who would LOVE to ha

Great location to work with. Thanks for all the help. IC Movers

Courteous, prompt service. My only issue is not with this location, but that I needed to rent a truck in Hancock, MI and had to pickup truck way out of my way for my move and U-Haul informed me of this at the last minute. To their credit, U-Haul Company did allow extra mileage for the inconvenience but I had to cover the extra fuel, which I had not budgeted for.

You helped with my move. Thanks