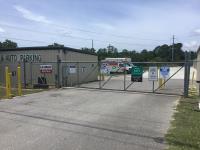 Did not like getting charged $8.62 fuel charge when truck was returned with same or just little more fuel than when I rented it.

Over charged my acct and even after the mistake was resolved it is taking forever to get my acct credit the money back.

Give the code to the gate

The manager at this location was professional and actually exceeded my expectations. I rent equipment several times a year and will continue to use this location just for the customer service.

Truck was not ready for pickup

I had previously utilized the Iron Guard U-haul site to return equipment on a one-way trip. Their service was excellent at the time. Move forward on the calendar and this time I rented a truck during the 4JUL weekend for a local move (a 3-day contract, local). 1- driver/passenger area was dirty; considerable amount of sand on the floor; center console area was stained with what looked like an old spill (coffee, tea, or dark soda). 2- location was scheduled to be closed on Sunday/return day (and previous day as well due to holiday) so a passcode to the automatic gate was provided (handwritten and highlighted by attendant); turns out the passcode numbers were in the wrong sequence resulting in a very frustrating episode as I am trying to return the truck and there is no one around to help. I eventually entered the numbers in a different sequence, and it worked. 3- I looked around the office area for a sign anywhere indicating where to return the keys (as no instructions on returning the keys were provided) and no instruction display was available. I did notice a slot near the door area, but it was not labeled as a key deposit box, so I did what I usually have been asked to do once or twice at other locations: I placed the key between the visor and cabin ceiling with the end of the key sticking out, left the truck unlocked and excited the gated area. A few days later (Wednesday) I received an e-mail from U-haul stating that I had yet not turned in the truck! I proceeded to call the Iron Guard office and spoke to the attendant. The attendant stated that they had tried to call me at my phone several times. I explained that I have no reception in my office and that no voicemail message was provided. At that time, I informed the attendant of the key location. At that point I requested to speak to the manager to clarify this misunderstanding; the attendant denied my request. On the following day (Thursday) I received an e-mail receipt changing my contract to a length of 5 days (originally it was a 3 days in length), increased the safe move insurance from $42 to $70, increased my rental charge amount from $89.95 to $149.75, estimated charges of $187.15 were converted to an actual charge of $271.42, increased the appliance dolly rental from $30 to $50 (the dolly was available in the unlocked cargo area the whole time; no key was needed to retrieve it) and my estimated total charges went from $233.51 to $345.66 for truck and equipment (total increase =$112.15). The sad thing is that the moment they realized that a key was missing, and had they left a voicemail on Monday, I would have been able to provide them the location by Monday midafternoon as soon as I had made it out of my office. Given their applied procedure in dealing with this situation I will not recommend this location to anyone. Their actions send a clear message that the Iron Guard U-haul facility does not care about the customer and will find a way to apply additional charges. Their a

Facility is difficult to get into (has security gate) and it is hard to contact by phone Or speaker at gate. Once inside gate there are no directions to office.

No need for improvement

There is not enough room to park a truck or move around the storage areas with the truck. Small grassy parking area falls off into a pond and no room to back up to get truck in straight. Have rented many times over the years and never had a problem. This time we hit the building trying to park the truck. The on site staff is great, the call center is confused.

The truck wasn't clean. We had to sweep it out to ensure our items were not covered in copious amounts of potting soil. Additionally, the gated entrance isn't set up for the uhaul which means you have to exit the vehicle to enter the code. The truck was old and had an empty pack of cigarettes in it along with the fact it seemed as though it has not received regular mechanical maintenance.

The process was very smooth and straightforward. The location did not have the truck i requested but I was upgraded to a bigger truck for the same price!

Our reservation was not supposed to be at this location. The truck was covered in mud and bugs. The inside was dirty with dried mud. There was even a dirty hat on the floor. We had to clean the inside before we could even load the truck.