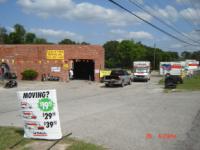 Excellent staff. Easy to find and plenty of parking if you need to leave a vehicle there

Office staff and yard staff were all very helpful and prompt. If I need to rent another U Haul I'll definitely use this location again.

24 hour drop off was worrisome, leaving a truck alone at night made me uneasy. However, waking up to my receipt knowing all was well set my mind at ease.

We got there right as they were closing. The gentleman was very helpful getting my vehicle returned.

Have trucks that are well maintained and don't sound like they are about to break. And for your customers to not have to deal with the hassle of extra charges and disputes

Customer service was great. My rental was ready to go & took maybe 10-15 minutes to get everything hooked up.

These guys were so friendly and professional! Definitely will use this location again.

Easy pickup experience. We got there about an hour early and had the truck in hand 30 minutes before we originally ordered the truck. The man was very helpful and quick.

As they were hooking the trailer up to my truck, they were airing up the right front tire. Although they assured me that they were just making sure the tires were properly aired, the tire lost pressure to less than 10 psi three times within a 21 hour period. The trailer and the facility were dirty and in need of significant repairs. The wheels did turn though.

Drop off instruction need to be more defined.

Just when someone has a reservation they should be priority. I know it is a tire business too but the UHAUL is yhier business too

Leals was great but the Austin Area scheduling department needs to be completely replaced. I was supposed to pick up my truck at 7 but nobody ever actually put it on the schedule so the website was telling me to go to one location and the app was telling me to go to another. I could not start the pick up process at either. Had to wait until 830 when leals opened because of U-Hauls screw up, and ultimately ended up having to pay the movers I hired an extra hour because I was running behind due to this screw up.

Customer service was awful at this location I will not return I had a reservation for 9 am got there on time and didn't receive my trailer till 10 am. They do not prioritize U-Haul there at all!!!!

I have no complaints about the location. I did, however, ran into issues with your mobile application. The mobile process was difficult to maneuver and there was nothing on the site that explained to me what to expect or what to do upon returning your vehicle. My rental was originally scheduled for 10 hours, however, I was able to manage completing the move sooner than anticipated and returned the vehicle approximately 3.5 hours earlier. I was not aware that I needed to complete the return online. That night I received a text about an hour prior to the scheduled return date, I called customer service, who informed me that since I did not complete the return online, I had to wait until the business opened and that they could have to verify the return, incurring me additional fees.

I dropped on a Sunday, they were closed.

I was scheduled to pick up my uhaul at 9909 fm 969 in Austin Texas. When I arrived at my scheduled pick up time at 10 am. No one was there and the office was locked up. There was also other people waiting there as well. After waiting 30 minutes for them to show up and another 20 on hold I was finally able to get someone to help me out. Was very dissatisfied with the Austin auto parts location.

Staff was nice, fast and friendly. But I received my truck with more miles than tracked and less gas than recorded. Overall not a big deal but I ended up giving U-Haul free gas.

Very friendly and convenient. Went out of the way to provide excellent service

The service is great and equipment worked perfectly. The guy there is very nice.

Frustrating that the location and trailer was altered after I made the reservation. Although it worked out, it created additional inconvenience.

The person who did the paperwork was very helpful--but the location was not great--I felt like I was going to get a flat on my car pulling through the lot and the equipment had been stored poorly so that we had to spend 20 minutes untangling it so we could use it appropriately.

There was no equipment available - straps, blankets, dolly - nothing. So just have some available! Otherwise, very friendly service.

Excellent personal service from the business proper, however, the time listed for pick up was at 8 AM while the business didn't open until 8:30 AM. Not a huge problem, but U-Hauls online service should at least know the businesses times when allowing for a reservation.

Nothing the whole experience was amazing

Customer Service was amazing! Will def be returining in the future!

This place needs to sell tires only. It's not a good rep for Uhaul.

Uhaul system allowed me to reserve "preferred pickup location" after the screen indicated several sites where the trailer was available. Not until about 14 hours prior to rental did Uhaul notify me of a change in location which was hard to access. Simple modifications to reservation software would eliminate last minute surprises. My previous experiences with Uhaul have consistently ranged from bad to abysmal. When moving out of state I reserved a truck which failed to make the trip from rental location to my house and had to be abandoned. On another occasion a trailer hitch was improperly installed and I had to return for correction as tongue was dragging. Since there are other options I never rent trucks from Uhaul and rented this trailer because it was the only available option. Courteous local Uhaul shop folk are nice to have, but poorly maintained trucks and unacceptable flawed reservation system make for a bad overall experience.

Overall, I am extremely dissapointed. My reservation was made, pre-paid, and confirmed via E-mail by U-Haul, to pick up my truck at the Riverside street location, in Austin, TX. This was less than 5 blocks away from the apartment complex I was moving my college sons out of. I hired local (hourly paid) help to assist with the move. After picking up all 3 of the hourly paid helpers, and dropping them off at the apartment complex, I drove 4.2 blocks away to pick up my "confirmed" rental. Only to be told that they did NOT have my truck at that location (even though my written E-mailed confirmation said it was there). I then was forced to spend the next 2 hours driving to and from a differrent location in heavy Austin city traffic, through stop & go construction zones, while my hired hourly help, was "on the clock" but not able to load the truck I was promised. A simple 1 minute phone call, or E-mail, or text, from U-Haul could have prevented this. But instead, I am out over $120 cash extra, for hired help that was unable to load a truck, because it wasn't there, due to U-Haul confirming and Reconfirming an invalid pick-up location. Then, when I got to the location to pick up my truck, they did NOT have the dolly I rented, and pre-paid for, which was ALSO confirmed on the E-mail I received from U-Haul. This entire situation could have been prevented with a tiny amount of proper communication. Instead, I am out an additional $120 cash, and now have a back strain from moving heavy appliances down 2 flights of stairs without the promised, confirmed, and pre-paid Dolly. Yes, I received a credit for the dolly I did not get, but that is not the point. I rented it, pre-paid for it, and NEEDED it. The complete lack of communication, and overall follow through by your company would have to be twice as good in order to be up to "piss-poor". This entire venture cost me time, and money, and days of physical pain, simply because your company could not make a 1 minute phone call. The gentleman at the lication where I did pick up the truck was extremely helpfull, and overly apoligetic, even though this situation was not his doing. Overall on a scale of 1-10, my experience with U-Haul on this transaction, is barely a 2. Please improve your effective and timely communication.

There is one person running the entire shop. He was very nice and professional, but the shop itself was very dingy, dirty and well outside Austin where we needed the truck.

Mr Leal Is a wonderful person he makes sure everything is fine with the paper work and explains it i love renting from him....

Personnel were exceptionally helpful and friendly!

Owner was 45 minutes late to open store than scheduled pickup. Truck cabin had hole in it, which we found out later, in the rain.

It was a little busy but I was attended to as soon as possible. Leal's also made sure the pricing was correct for my rental. Thank you and God Bless!

Jason provided exceptional service. When my son and I arrived to pickup the U-Haul truck, he was very busy, yet when it came to our turn, he was very friendly and courteous. We did not feel rushed. When we arrived the second day to pick up our carrier, he went over-the-top to help us load my son's Mustang onto the carrier. Jason is a wonderful example of true, old-fashioned customer service. He made us feel like family. U-Haul is lucky to have him!