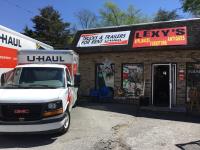 I had planned to return the unit to a motor Company in Rockwood. When I arrived they told me they had not been a uHaul outlet for a long time but can't get their information deleted. From these TWO experiences I'd say your IT systems are BAD!

Very helpful and very caring, understood my concerns and gave me the 1-800 no# to corporate office.

Well we was lied to about the price for the first and then the trucks transmission acted funny when we was driving it . But it was good other than that

tall man with very short hair and beard was an asshole and should find line of work.

This was one of the worst customer experiences I've had in a while. I booked the moving van on 14 July. I was called by someone from U-Haul right away and he confirmed my order. He said that we'd be able to pick up the van on Wednesday morning at 9:00 am Wednesday July 15 at the 1064 N. Gateway Ave U-Haul dealer in Rockwood, TN. I then checked in online and was given an order # 25701629. On Wednesday, July 15 we arrived at the U-Haul dealer before 9:00 am. No one was there, even though on the front door the opening time was 9:00 am for that office. We waited until 9:00 and then called the number provided in the confirmation email (865) 285-0093. When I called, it sounded like he was still in bed and I woke him up. He mumbled some unintelligible things which I couldn't understand but in the end, he said that he'd be at the office in 30 minutes. At 9:30, he still did not arrive. I called him again and he said he'd be there in 5 minutes. At 9:40 he arrived. 40 minutes later than the confirmed time. When we went into the office, Danny (the man who was working there) seemed hostile. He wouldn't even look at us or even acknowledge that we were there until I spoke up. I told him that we were there to pick up the van that we ordered the day before. He started to do some things in the computer and then after a couple of minutes, I mentioned again that we have already ordered the van and we checked in already online the evening before. He refused to look at the confirmation number I showed him. He mumbled something like, he doesn't care what I did and he was going to put it in the system as if we never already checked in. He started asking us all kinds of questions of things that we already filled in online on Tuesday. The whole process took 20 minutes of our valuable time, plus the 40 minutes we had to wait in the summer heat until he arrived. Also, we were sent a text on Monday asking us to check-in online early because of COVID-19. But, Danny never wore a mask and did not respect the six-foot social distancing rule. What was the point of the early check-in, filling in our order online, and the caution about COVID-19 when it would be ignored when we arrived?

Great owner at this location

Gas tank was on E. Business owner said we needed to stop right away to get gas. When we started the truck the message was 0 miles of gas. Had to be pushed up to the gas tank by 2 men after driving 3 miles to gas station. Truck had a blow out on the trip, waited 2 1/2 hours or longer for someone to come to change it. They had trouble finding a tire to fit it.

The reservation I made online was $98. The guy at the pick up location tried to charge me $165. He brought it down To $113 because â€œeveryone needs a break.â€ The store was gross and he seeemed ill. The truck looked clean upon first glance, but there was garbage shoved under the seat. The tank was empty. All around infuriating experience.

We had excellent services from all.

Couldn't complete mobile check-in because GPS wouldn't recognize the address. Owner wasn't there to open his store at his posted operating hours. Had to call and leave a message on voicemail and text him to get him to answer. When he returned my call, it was going to be another 15-20 minutes before he arrived. Which would have made it an hour and a half past the time I had reserved my pick-up. He did offer me a discount for my trouble BUT only if I gave him CASH for the rental. Suspicious!!!! I didn't have the cash on me so I didn't accept the offer. However, when he was processing my check-in, he charged me for two days rather than the one I reserved the truck for. I got to the location I was going to load for my move, only to discover he hadn't included the blankets I had included in my reservation. Previous times that I had rented from other u-Haul locations, the blankets were in the truck. So I had assumed they were in this instance as well, especially since I had reserved the truck to be picked up an hour before he opened. When I went back for them, he said that since I hadn't asked him about them that he deleted them!!!!! REALLY!!!!!!! This was a horrible experience.

This was not my drop-off location. You messed up my contract.

Very nice people to do business with.

He was just awesome very knowledgeable of the process

It was great service. Truck was clean and ready to go !!

Make sure All the equipment is there when you arrive to pick up.

None all was good.

Make sure that all of the car transport lighting is operational handing it off to the customer. Found out AFTER it got dark that the car transport trailer had only one operational brake light, NO running lights and no turn signals - not a great situation for towing on an interstate after dark. Also, one of the straps to hold the vehicle onto the transport was badly worn and looked like it could break at any time. This was not a stress/worry-free rental.

Telling them what the need to do before leaving with vehicle and returning vehicle. Will not use again

Bobby was friendly and helpful checking in the rental return!

Adequate, but slow to process transaction. Friendly though. One point I need to make. He did not explain the contract.

Maybe offer a truck or cargo van one way Because i didnt need that much truck could have done with a truck or van Everything else was great thank you.

No one at location when I arrived for my 9:30am pickup. Worker finally arrived after 10:00am. No apology or explanation for being 30 minutes late. I paid for moving help while waiting for someone to arrive to complete the rental app and give us the keys.

When told by the agent that I was being charged a local rate and could drop the truck off at another location but then called and informed that I was going to be now charged double the rate I was very upset although once I had to take my time to clear up the agents mistake it was corrected although the truck had less than a 1/3 of a tank of gas and I filled it and left it with 1/4 of a tank which is more I was charged an additional $12.00 So over all experience terrible