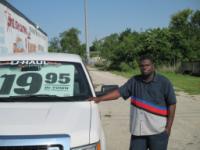 At the beginning I was told that I was going to get charged according to the miles I use. When I went to return the vehicle ni one new what is going on. I was waiting 2 hours to return the vehicle and comeback next year. I did go back next year I waited another 2 hours and I was surprised that all my money that I put as guaranteeing was taken. I was told that I won't be charged by miles but city. I'm too disappointed.

It would be helpful if the store employees knew how to hook up trailers. I did not ask for help but he quickly stated he never connected the auto transport to a Uhaul truck before.

Staff were efficient, quick and professional. Truck was in good condition.

Easy pick up and drop off. Would recommend this dealer.

Great customer service, through yet speedy checkin process, and professional! Would recommend and use again.

Truck felt as if it had transmission issues. Brake did not work good. Seat belt kept chiming

First, I went to the office located at veteran's memorial 190 Business in Killeen. There was a lady who told me that there she was working by herself. Recomended me to go and look for a different location because she was busy to attend me. I went to Fort Hood store and the gentleman from there has customer's service skills.

The trailer was sitting in tall, wet grass. I was expected to pull it out and hitch it up on my own. It took a good 10 minutes to work it out of the mud and grass and I got pretty dirty in the process. Not a good location to keep trailers. I will not use this location again.

The person who did the intake just took the keys and sat down at their computer. After I stood there for a bit, the man told me he would take care of it and email me. Now I know why he did not want me to wait around, he charged me an additional $178.20 that he was not supposed to. I already paid $228.45 when I rented the truck and I brought it back swept, with the pads folded and with 7/8ths tank of gas like I was supposed to. This location is scamming people! I'm now having to follow up to get this unauthorized charge credited back to me credit card. I would investigate what these guys are doing on your company's behalf.

Just make sure the back is swept out.

The Uhaul Representative was very friendly. My equipment was available when I arrived. I would recommend this location to a friend.

I locked key inside vehicle sorry

He was great. I was in and out in minutes. Very helpful because I needed to get a truck fir in town moving.

The man at the location expected me to hook up the trailer myself. When I said I did not bring help he seemed put out by having to help me. The location of the equipment is almost impossible to get to. I have been using UHaul for years and I will not rent from this location again.

This locationwas good and there staff were great people.

The truck itself (inside) was very dirty. They did not have my reservation, but that would be U-Haul itself, not the local dealer.

The man who checked me in wasn't very knowledgeable with the computer he tried to charge me for 2 days for a rental that was returned 8 hours later. Very disappointed in the service. Will never go to that location again.

Nothing. The staff was great to me.

When picking up the trailer I was only told where it was and that I could back up to it and take it, There was no direction on how to hook up the trailer or inspection to see if it was done right. Upon getting the trailer to my house to load the vehicle on the trailer came unhitched and hit the tailgate of my truck causing a dent. I had read the instructions on the trailer and I believed that it was hook properly, if I had someone check it before I left the facility then I am sure this would not have happened.

Inside of the trailer I rented was not clean at all. We had to clean it out before we could use the trailer.

Easy to sign for vehicle, and easy to turn in :)

The gentleman met me outside before I even got out of my trunk- to help me disconnect the trailer and place it to the side of the road with his other trailers..Very friendly and helpful.

I brought the truck back with the transport trailer attached to have them check the hookup. They were very supportive and helpful.

The representatives at Lone Star Customs shop was awesome. They were helpful and very knowledgeable.

Fix equipment before renting, did express check in on line, this did nothing to speed up process. Staff could not figure Out reservation computer system.

Drop off location was closed on Sunday when we dropped off. But the location was easy to access and had plenty of room to leave our trailer

This shop is fast and friendly. My go to shop now!!

I had a really hard time getting anyone to answer the phone. I called all hours of the day and never got an answer or call back. The following day I tried to call again and still nothing so decided to just show up in person to confirm my reservation. The older gentleman working was on a personal phone call. Also, he said he didn't have me in the system. I just didn't like the overall service at this particular location. However, when I went back to actually pick up my rental, the younger gentleman working that day was very helpful

This place made it easy. Friendly employees

This was the trashiest Uhaul rental ever. The cup holders were dirty, there was dog hair all over the cabin, and a pit bull that greets you at the door when you get to the location. After telling them we don't like dogs, they did nothing. I posted the pics on Twitter, and heard from a representative who essentially did nothing but ask me to send them my contract number. I rent from Uhaul often, but this is less than professional.

I dont know who was responsible for the extra charges on my card. First, the man didnt do a walk around or check of the Uhaul. I sholud have insisted. I was charged for blankets ( that wasnt present when I used it) extra day,( although I only used it for 12hrs) Also mileage that I didnt use. I had to call a corporate to get my money back. Its how I found out all these charged was placed on my card. All fraudulent . However, since then my money was returned. I will never use that location again.

First off, we went to drop off our trailer so that we can use the uhaul ramp to make getting our stuff out easier, but the doors were locked and the windows to the business are tinted so we couldn't see in. The open sign was on and here was a car outside but no one ever opened the door. We called and called because neither one of us wanted to detach the trailer wrong or just leave it out but there was no answer. Second, we had such terrible trouble getting the uhaul and trailer into the "parking lot" because it is so small and right next to a busy roadway. My husband and I are not professional trailer or truck drivers, so this was very frustrating, especially since no one was there to help. So we ended up driving to another uhaul location so that we could get some help (the one on veterans memorial and second street). Not only was the wait extremely long just to ask if we can leave our trailer but the lady said no because they had too much equipment already on the property. She said she would call another location to see if it was okay to leave it there, but this would be the third location we go to, and on top of that, uhaul does not give you unlimited miles so driving around looking for a place to take this trailer was wildly inconvenient. So we ended up just in hitching the trailer ourselves back at the original location. No problem. HOWEVER, we went back to drop off our truck a few days later and we thought it would be no problem because this time the people were there, BUT NO. Mind you, we returned the uhaul back, just as it was, same gas, swept the inside, everything. They charged us $62.00 to refill the tank because they said we returned it empty. Luckily, I took pictures of the gas meter before leaving the truck that showed i returned it with 1/4 of a tank, just as it was received in our contract. We went back after seeing the charges (probably about 30 minutes after dropping it off) and spoke to Jay, who denied the tank was at 1/4. There was no way the truck went down a whole 1/4 of a tank to empty from driving it two miles from our house to the location. But after going back to check, Jay realized that we weren't lying and said he would correct it right away (which really meant the next business day). To me, it felt like they wanted to just charge us because that's bogus to say it's empty vs 1/4 of a tank. Not an honest mistake. This location was not professional or convenient at all.

A little better training for the people using your program to check out equipment. And I don't appreciate them not checking in the trailer when it is turned in on time.

Let me preface this, this was my mistake for not doing my own pre-checks. The car dolly I picked up from this location had an inoperable lighting system. I was pulled over three times before I gave up for the night and finished my drive.

Nice people. Worked out well. Anticipate getting a truck for our upcoming move

Nothing, my representative was very polite and knowledgeable, he ensured I fully understood everything and if I ever need to rent again I will definitely use the same location again.

In case of emergency they should be able take card payment over the phone. That is very inconvenient.