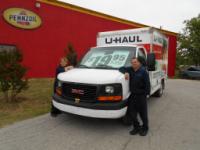 They are conveniently located on the main highway.

Listen when told what location to drop off at

It was not the nicest uhaul I've encountered but served my purpose.

The guy was trying go send me to another location to turn in the trailer, i told him no bc they sent me to that location to return it so i was going to go somewhere else.

No improvement needed, Juan was super nice and very helpful.

Went to Dutch Clean Storage to execute my reservation to pick up at 10am (not mobile pick up), and nobody showed up. Called and were told the manager refused to come in. Later received a call from a woman who wanted to know if I got my truck from Dutch and I said "no, no one showed up." She said "wasn't it a phone pick up" and I said "No." They hadn't even bothered to look up my reservation which I had changed because of phone problems. Hate the gummed up process with the phones, it is like not being trusted and being spied on by Big Brother. It is basically me doing all the work for you so you can stop paying real people and get the customer to do all the work. It is a pain in the ass and I won't do it. You have made a poor decision and next time I need a truck, I will do some research...

There was no one at the service desk to hand over my keys even though the center was supposed to be open. I live chatted with Uhaul in the Uhaul app and a robot kept telling me to "go to the service desk for assistance", which I clearly could not as the doors were locked and it was closed. Finally, I got a number for my local customer service rep and they told me to "go knock on the door", which of course did not work as there was no one there (as I had mentioned). They ended up giving me the lock box code for a different truck and after 1 hour I was finally on the road. Will not be using this service ever again.

There was Caramel popcorn left scattered in the truck. It was melted and sticky.

Staff was late, the truck had damage. When I did the contract this was not taken into consideration. The engine acts as if it needs to be serviced.

The location & pick up i originally had reserved was closed at my pickup and I had zero help from uhaul customer service. I really do hate using uhaul for that reason but the Lube Center location was amazing. Please fix your customer service area rep issues.

I didn't return the truck here. I returned it to curtner in San Jose California.

I ordered a dozen blankets. Received only eight. Was to told there was six in each bag. There was only four in each bag

I am still waiting on my deposit to be paid back. Can someone please get ahold of me ASAP

Juan called me to let me know they were closing early the day of my pick up. It was highly appreciated. This is the kind of service every business should strive for.

Will use this facility again.

U-Haul was not their primary thing so it took upwards of 30 minutes to get someone at the counter who could help me.

Uhaul online and customer service chat and phone all suck. I may never use your services again. Very stressful

I would like a call from a supervisor immediately. I have several legitimate issues to report and am requesting a full refund of my rental. I made a reservation a week before my scheduled move only to have several avoidable issues arise due to your UHAUL representatives. To start I made my reservation to pick up on Saturday, July 20th at 7am in Pflugerville, TX. I received email confirmation. On Friday, July 19th I received a text from UHAUL at 10:35 am notifying the pick up location changed, at 1:17 pm notifying of another change in location to pick up the UHAUL, at this time I called because I became concerned with location changes. I spoke to Charlie who confirmed the address change and gave me better directions to get there. When I arrived to the pick up location Saturday morning, as we were reviewing the contract, is when I learned of the change in my contract, at some point my reservation was modified by a UHAUL representative, downgrading my truck rental from a 26ft truck to a 20ft truck. At this time I clarified with the representative at the location showing her my original reservation and the multiple text messages. She was confused just as I was. She could clearly see my confusion, concern and overall anxiety as I sat in front of her. She began to call multiple locations in an effort to get me the truck I needed. There were none in the nearby locations. She called what she said was â€œtraffic centerâ€ where we were so rudely received by April White, who was so aggressively argumentative, rude, unprofessional and completely disrespectful to me and the UHAUL representative alike. She claimed that I received a voicemail informing of the truck change, also giving me instructions to call if I disagreed. Friday was my last day of work therefore it was a very busy day. Nonetheless I checked the voicemail box in front of the location representative to show her that I had no such voicemail. I even went as far to show her and allow her to hear my deleted voicemails. There was no such call. April White proceeded to yell over me as I attempted to explain to her that I had no such call. She STILL argued and even went further to say, she was sitting next to the agent that called me! I find that very hard to believe! The representative from the location I was at interrupted April White because she too was in complete shock in her approach towards us. Reminding April that she (the rep) worked for UHAUL, asking what could be done to assist rather continue to argue and also reminded April there was no need to put me in my place! After the UHAUL representative who was helping me told April of her customer service skills April then and ONLY then did she actually stop yelling at me, all while she was on speaker being recorded! She probably didn't even hear when we told her she was being recorded or that other people were in the store and could hear her. Another customer was so astonished he began recording as well. It was embarrassing, humiliating and overall

Customer service was good, no complaints. About the vehicle, the Truck was dirty, flooring felt slippery by an oily substance. While driving it felt like it needs some alignment. Probably I got a not too good unit, but other than that is was ok. I made the reservation just the night before to my moving.

The guy at desk was very nice and professional.

Two weekends in row we rented the truck. The customer service is excellent.

I would have liked for their to have been other materials at the first location. I had to drive to a UHaul store to get blankets and a furniture dolly.

The gentleman was very polite and helpful.

Your truck is good but you need a big dolly in the truck.

The rental drop-off place was full but he said they would make room for the truck which they did.

This vehicle smelled horrible. The smell was so bad we were not able to complete the tasks we needed to. We noticed it smelled as soon as we started driving away. We hoped turning on the air and rolling down the windows would help. When we got to our first location we opened the truck to "air it out" while we finished getting things ready. This did not help at all and by the time we realized we could not actually use the truck for fear that all our items would smell the location was close. This is by far the worst experience I have had with a rental.

This location was understaffed and the wait was extensive. The after hours drop box was a nice feature that made the return easy and convenient.

Did not have the appliance hand truck and moving blankets ordered

Easy after hours drop-off. Could however put some spotlights in the back as it's always really dark.

Fast friendly customer services. This is the place to rent from.

The worker checked on problem with lights and as I was getting back in my truck I found the fuse box cover and a fuse on the ground. He had broken the cover and I had to tape it in place.

Excellent service. Professional in every way. I am highly pleased.

The location was closed 30 minutes before posted closing time. The lady in the insurance office next door was very helpful.

There was only 1 person working the counter, checking everyone in, taking them to the trucks, etc and he was also going out to help with the oil changes and what not in the bay areas. He was preoccupied and not very friendly or accomodating.

Staff was not there on time for pick up and did not apologize for almost an hour delay.

The attendant wasn't even there when I went to drop off the truck. Also, no one told me when I chose a drop off location that I would have to keep the truck until Monday be late to work trying to get it back. I rented it over the weekend to avoid that, and refusing to let customers return to a different location without a huge fee is ridiculous.

More supplies, thanks a lotâ€¦.

Be on time to serve and have everything ready at 9am when I showed up at 8:40am/ I was asking to wait until 9:10am because they have to fix the cars. Keep it separate cars repairs and uhaul rental representatives. They only have one person to run the shop an uhaul rental.

I would not recommend this location to any one to visit or even drop off a u haul truck they received from somewhere else. I walk in the place their is grasshoppers jumping around, the person taking in the u haul is not a working for u haul, and very rude, he was not at the desk he was changing oil in someone else vehicle. My card was charge incorrectly and he just gave me a number to call to handle the situation and he walk off.