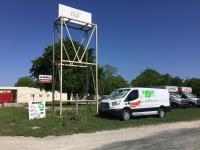 Allow payment online even for local moves. I had to revise my route just to be able to pay on line.

The truck was delivered back to center on Sunday afternoon, received a call on the following Tuesday from the center stating they had not received the truck, I gave them the above info and said the keys were left in the lock box as directed. They will check into it. Never heard another word of it. Otherwise experience was great gentleman was all about providing the best customer service.

I made my reservation on line. My pick up time was 7:30 AM. I arrived at the location at that time. The person in charge of renting the trucks did not arrive untill 9:00 AM! I wasted an Hour and a half of my long day moving waiting for him to show up. Furthermore he stated that the pick-up time he had for me was 7:30 PM I showed him the confirmation email and he said it was messed up in his system. He said they don't do pick ups before 9 AM. Had I known that I would have not wasted my time waiting for over an HOUR!! There was no communication! ALso the location did not have the dollies that I requested and I was not notified until the day before my move! The person was apologetic and friendly about the mix up. I would not recommend reserving UHAUL online to anyone.

The location that I chose to pick up at, made reservations with and based my movers showing up by, was changed the night before. From a pickup 4 miles away to 22 miles away. They said the original location didnt have a 20' truck, yet it apparantly did when I reserved it! So the new pickup location.. the counter guy had no idea that he had a rental going out, so he was 1/2 hour late. (Originally scheduled a pickup at 9am, ) so he gets there @ 930, checks the gas gauge, and sent me on my way. Im still trying to make it back the 22 miles so I can mert the movers, that I had scheduled at 10 (through the uhaul website) to load the truck for us. So I made it back right at 10.. no movers. 1010 they text me saying they had car problems, and were waiting on roadside assist. I offered to pick up at least 2 of the 3 guys I had scheduled.. they quit responding altogether. (Btw, these were the 2nd srt of guys I had scheduled through uhauls website, the first guys called me and said tgey didnt service my location.) Eventually we found some guys to do the job, and got it done. We just left 5 hours later thsn planned. On to the truck itself! When I picked it up, it was filthy. Going through some rain storms, I found out that the winshield wipers were shot. All they did was make a mess on the windshield. Several times, when I pushed on the brake pedal from a very slow almost coast forward, the truck would act like I was slamming down on the accelerator.. I had to stand on the brake! I told the check in guy about these issues when I dropped the truck off. Hopefully they get addressed, as I feel this was overall an unsafe truck.

Accountability of trailers is very lax. I was contacted 10 days after returning the trailer and informed that I was late in returning it. This is not acceptable.

Worked perfect for us and got a great deal thank y'all

When we arrived, we found that the trailer we needed wasn't on the lot. The local agent helped us find another trailer at a nearby location.

Used the 24/7 drop off to drop off late at night: overall, the place was easy to find and had an easy to locate key drop off

I do not like â€œon lineâ€ services I prefer to deal with a real person. Mike was very helpful If the need arises I will use him again

very good service went out of way to help