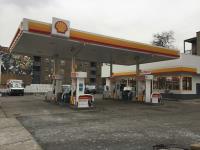 The guys at the gas station had no info on how to get the van. It was like they were not associated whatsoever. I had a pretty frustrating experience largely becuase expectations weren't well set. I tried to poke around the u haul site before my rental day to orient myself in what to expect but just got the message that "it will be easy." But there were issues with the app accurately knowing where I was, insturctions on how to find the right bar code to scan were hard to find. The images I pre-loaded of my license were not available and needed to be re-taken (on a frigid January day in Chicago) and tehre was a pretty stupid step of sending u haul two friend's phone numbers so you could call someone if I missed my return time OR do something like upload my passport information - these tasks clearly serve separate purposes, so was it really necessary? Your customer service people were very kind and patient and I appreciate the service and it was probably better than I'm giving it credit for, but I was cold and furstarted and confused in the moment and a lot of that could have been avoided if your communications prior to getting the van had set clearer expectations.

It's more than just the location, it's a holistic problem with UHaul's processes. I reserved a truck and opted for mobile pickup (24/7 share), but when I arrived and went to the link provided there was nothing I could click or select to pick up the truck. No button was there to choose. So I called and waited on hold for ten minutes then gave up on that and went inside the location (a gas station) to see what was happening. The person in there called someone and said something I couldn't understand about someone coming to get a key, I think... So I went back outside (too many people in a closed space during COVID) and called the 800# again, again waiting a very long time to connect. When I finally got someone on the phone he told me it was the scheduling agent's fault and that UHaul couldn't help me. He gave me the number to call that person and when I brought up the $50 credit I was guaranteed for a truck that wasn't ready he said it wasn't UHaul's problem and to talk to the location manager. Amazing, pass the buck. So I called the scheduling agent and when they finally answered they just told me the code to the lockbox so I could get the key and left it at that. Ok, I took the key, took photos of the truck to ensure I wouldn't be blamed for any pre-existing damage, and went on my way, late for my move. Then, when I dropped it off, I put the key in the dropbox and when to the uhaul.com/share link that was printed on it to check the truck in and there were no links for check-in, no buttons to click to let anyone know I was there on time. So I took more photos to ensure I wouldn't be blamed for low gas or mileage or damage and tried calling the 800# again with no pickup after 20 minutes. Then, I went home and got a call from the location manager, who wasn't there when I dropped off the truck. He was confused and said there was never a contract initiated and that he'd have to do it after the fact and that he'd take care of it and I was done. So I thought, until I got a series of empty and confusing emails about contracts and even one that mentioned photos of damage that I would have to click the link to see, but there was no link to click (UHaul loves denying me the links I need). Also, when the contract was finalized, I was wrongly charged CDW coverage ($25), that I waived when I signed up for this initially. So, more chatting with online agents finally got that charge reversed. This is the third awful experience I've had with UHaul and I'm never coming back.

The customer service sucked. I opted for counter pick up, get there and the 2 ppl working immediately told me to go online to check in. I did, and wasn't given the lockbox code so when I asked if they could retrieve it, they said no, call customer service. So I did and was on hold for 34 min. Was told they too could NOT help me and had to hold on another 3 min while customer service called inside to the owner. I then had to wait another 30 min while he was on the computer OBVIOUSLY with NO clue of what he was doing. He then had to call customer service AGAIN while I waited another 10 min while he retrieved the lockbox code! This is my suggestion, DEALERS SHOULD KNOW HOW TO OPERATE UHAULâ€¼ï¸

Better mobile pick up interface. Took forever to figure out to get a passcode for the keys in the lock box. Logged into reservations and never knew I had to select â€œpick upâ€ to initiate next step.

The gentleman that was behind the service station counter, could work on his customer service skills.

U-Haul online experience was Awful. Online check in was not well done. Support on phone was good but on hold for over 30 min

When I picked up my rental the left rear tire was so low on air that the flat tire light was illuminated. Since the pickup location didn't have a functioning air pump I had drive around and try to locate one. Of course this cut into my 4 hour time limit which I don't appreciate.

24/7 check-in system was down and this delayed my pick-up time. I think I should be compensated

My reservation specified that there was a U-Haul person on site but there was no one on site. During pick up I first called your 800 number and was transferred 3 times, on hold for 45 minutes and still was unable to get someone to provide me with the 4 digit code to obtain keys to my rental. I was finally able to download the app and get the keys which took me 1 hour in total. Absolutely the worst service I've ever experienced.

I was a little confused with the return process but the van was great!

I have rented three uhauls in the past week and although I like a lot of the convenience of ordering online, the app has been VERY glitchy and I've wasted a lot of time getting it to work right.

It was easy to find the vehicle. I had a question and it was answered quickly and efficiently. I was able to return it without any issues. I would recommend this to anyone.

The mobile pickup could be a tad bit better when chatting with customer service on line.