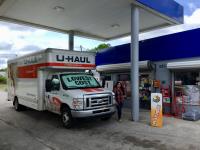 We rented the truck at a Sanford location and were sent to Sunoco â€œOsteen â€œ location to pick up truck. Sunoco Rep. was nice, but she did not have online access to U-Haul. We had to go to next door gas station to wait for the person that had the â€œU-Haul tablet â€œ (about 15-20 min.) to complete transaction, then go back to Sunoco to pick up the truck. Sunoco didn't have the key, we had to got back to the other gas station to get the key and returned to Sunoco to pick up truck.

Terrible experience. I reserved a van through the U-haul web portal weeks in advance, and received an email confirmation with instructions for picking up the moving truck. A few days before the move, I was contacted by U-Haul management who said the truck I requested was not available at the location I selected, so if I wanted the truck I would have to drive to a different station which was several miles further away (meanwhile, I traveled over 150 miles to get here as I was helping my elderly parent move). I arrived at the U-Haul station, which was actually two gas stations adjacent to each other, both with U-Haul trucks and vans in their connecting parking lots. I went to the first station, which was staffed by someone who appeared to be under the influence of alcohol or another substance, or perhaps had a bender the night before. He grunted a reply when I asked for help picking up my U-Haul and sort of gestured to the other adjacent gas station. So I walked over to the other station, and was greeted by a nice enough young person who said the person in charge of U-haul rentals has left on a road trip and was not expected back that day. At this point, I was very angry, as I had traveled many miles, and it was early in the morning, and I was unable to pick up my U-Haul truck which I had scheduled far in advance. I asked to speak with a manager, but there were none on duty. After about an hour or so of trying to communicate with alleged drunkard in gas station 1 and the sweet but helpless clerk in gas station 2, they finally contacted the manager via his cell phone. A lot of time wasted and poor communication and customer service.

Make sure the workers know about the mobile part of your business.

Excellent, and wonderful customer service at this location! Extremely happy and will be back!