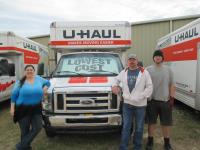 Customer service, in person and on phone need to be more friendly and not act like we're bothering them. More people answering your 800# so the wait is not over 40 minutes. Then make sure your computer system is running correctly so your not overcharging people.

This location was one of the best I have ever rented from would highly recommend this location.

Well truthful rates. When I booked my total was around 605. When I paid it was 7$$ something. Not cool seeing I was on a extremely tight budget!

Very nice and friendly and helpful.

Ryan at Re-tire sales did an outstanding job. The entire process was extremely easy... we had to change our move date at short notice and Ryan took care of all the details and made sure we were coved. Excellent customer service.

Make sure when someone rents furniture blankets that they are in the truck!

The lady at this location was friendly, the location was hard to find also the windshield was full of bug splatter. Finally I had trouble with the key unlocking The ignition so I couldn't stop to eat and I had to leave the truck running when I gassed up And to use the restroom because I was afraid the truck wouldn't start back up.

The Elm Mott location was kinda sketchy to pull up to. Had to look for someone as there was no one to be found. The Uhaul guy didn't seem to know what he was doing. He knew we were only in Texas to pick up a motorcycle and drove back to MS and had put in for us to return the trailer in Elm Mott even after asking multiple times if it could be returned at our home location. Major headache. Kudos to John at our home store and Lauren at the Elm Mott store for getting it all worked out without charging us a considerable amount more for the error.

When a customer gets a truck.or trailer from you. You need to explain in great detail what is on the contract plus you need to give a copy of the contract to the customer right then so.they know all what it includes in the contract. Plus need a whole lot better customer service.

Nice people running this location. They had me signed up and hooked up quick and easy. Double checked hook up.

Originally called u haul, and was directed to another rental location. Reserved a 26' and gave credit card number. When we got there, nobody was there. Called and was told they NEVER had that size truck. She said u haul was supposed to contact us the night before and tell us. THAT didn't happen. She said this location that we rented from had a 26'. I called and they did NOT! We had to settle on a 20' and made an extra trip, which cost us more because of more mileage charge. NOT HAPPY!

The service was suck ass

Truck was pretty clean but basically on empty and the truck was just very old and worn. The lady there was very helpful and accommodating after the first confirmed location for my rental didn't have the truck

I was very pleased with the service that was provide at this location, I would recommend them to anyone

Not a thing it was fantastic.

As military family we move a lot. This is the first time we have used Uhaul. I have to say, no one was really familiar with the needs of military moves (which would be a big niche for your market). We didn't get a final bill receipt for our move. The only thing on our online account was a reservation confirmation. Hopefully the military will accept that??? Getting our boxes weighed was asking them to go the extra mile... so we appreciated that. Without the scale tickets - our move is not reimbursable. The delivery truck seems to have a lot of break downs. But they were delivered on trailers and that worked out well even though it was 4 days after the original date. Which lead to $200 in temporary supplies. I was really thankful that nothing broke! Seemed like packaging and the stability of the boxes was great. We loved the convenience of the process. People were nice. Not sure if we would go this route again because the paperwork was really hard to get people to understand/non official looking. Which just makes us nervous about not getting reimbursed by the military.

The over all experience was good.

Awesome to work with. Very friendly and went out of their way to help me. Special kudos to Lauren!!!

Reason for low rating was telephone contact. Called repeatedly on two separate days trying to talk to a person/agent. No one ever answered and voicemail has not been setup yet so it was non-existent. I was very uncomfortable leaving the vehicle on a dirt road, outside a locked gate, on someone else's property, with 36 pads and two dollies inside an unlocked cargo box. They did get in touch with me before they closed the next day to confirm they had the truck and contents. Physical location hard to find. Road signs misleading or buried so low that passing vehicles could not see nor read them.

There was a bit of confusion at times but every single time I called people were mire than happy to help. I felt like family. Thank you so much Karen

The location used old bolts for the hitch (instead of a correct fitting pin) and it rattled around. We stopped at the UHaul location on 165th and Aurora and they exchanged the bolt for a better fitting pin. They were great.

We were very unhappy with our experience. We feel frauded and disrespected by RR Hardware. We were promised a rental at one price and were charged three times that price, and would like UHaul or RR Hardware to honor the original promise. Furthermore, I believe it is important that management at UHaul is aware that the employees at RR Hardware are not respectful of their customers and it does UHaul a disservice to use them as a distributor of their goods. When we made the reservation to pick up the vehicle on Sat, Oct 17, at 9am, we were told over the phone that the rental would be $19.95 and the insurance option we chose would be $14. We needed the Uhaul to drive to pick up furniture because we decided it would be less expensive than having it delivered. When we got to RR Hardware, we were greeted by a rude, unprofessional, and unhelpful employee, who informed us that since they didn't have any printer ink, he wouldn't be able to print out a contract for us. We were under time pressure, so he told us we could just sign the contract when we returned the vehicle. We asked him to go over the charges, and he told us that there was a $19.95 rental fee, and a couple different options for insurance. We told him that we wanted the insurance option for $14. We then asked him if there were any more fees. He told us that we needed to fill the gas up to the level that it was at when we were renting the vehicle (which was 3/4 tank) and if we didn't, a penalty would be added. He then took our information and gave us the key. We were expected to walk out in the pouring rain and pull the vehicle out of a parking lot inwhich the vehicle was stuck with the wheels spinning in the mud. When we asked for the employee's help he told us that it was "the customer's job to get the uhaul out of the parking lot." After some effort, we were able to get it out. When we returned the vehicle that afternoon, the same unprofessional and rude employee had the contract for us to sign. He informed me that the total bill would be about $93. Because we had filled the gas (actually above the 3/4 level it was initially), I asked why the price was so high. He then told me that the milage used cost $0.99 per mile. When I told him that we did not know and would have never agreed to this charge, he told me it didn't matter, and that he didn't have the abiliy to refund that charge. In his own words he was a "slave to the system" and was not willing to help. When I asked him the name and number of his supervisor that could honor the original price, he told me that he was not allowed to give out the number of his supervisor "because this happened a lot" and he "got in trouble for giving the number out to everyone." He was instructed to direct all complaints to 1-800-GoUHaul. After talking with some friends, I have found that RR Hardware is an unrespectable business, and figured that UHaul might want to be aware of these problems. The only things that would make th

The renter talked incessantly about beating his step children and castrating some guy in the seventies. I AM NOT JOKING. This guy was insane. I wouldn't go back with 10 friends to protect me. I've lived on the south side of Chicago and the Bronx, but the level of crazy and fear for my life here was unmatched. The good news was that the truck was great.

The location was closed when I showed up for my 9am reservation. When the guy arrived to open the shop after 9:30am, he was not happy that he was woken up. The printer did not work, so he gave me a handwritten piece of paper that showed the miles and gas level. The truck had over 215,000 miles on it and it was very dirty. When I picked up the truck it had 7/8 of a tank of gas. I drove 13 miles in total before returning it 3/4 full. I expected to be charged a reasonable fee for the used gas. The guy at RR Hardware said that if he put in the computer that I did not replace the 1/8 tank of used gas, Uhaul would charge me $49. He suggested that I give him $15 dollars cash under the table to call it good. I gave him $10, which he quickly pocketed. I will not recommend this pickup location to anyone. Uhaul should seriously consider the damage to their reputation when they send customers to such shady pick up locations. The hardware store was dirtier than the truck.