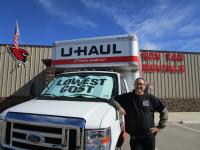 The guy was very helpful

On May 5 I contacted U-Haul at Riggs & AZ Ave re renting a 5x9 ft open trailer. They did not have one. They reserved one for me at Riggs & Power.. I went there. They attempted to write me a contract for 3 days at $150.75. After fixing the computer and printer, they printed one for me at the 3 day price of $115.75. The contract had the correct amount but only showed one day. When I returned the trailer to Riggs and Arizona Ave on May 8, the people at Riggs & AZ charged me $62.73 for an extra day.. This was an error since the amount of $115.75 was for 3 days. Sonja, a very patient & smart employee at Riggs&AZ Ave took charge, and issued a credit to me for $62.33. I sincerely appreciated her efforts and understanding. She must be a really valued employee of your company. The $62.33 showed up 2 days later on my visa account. Thanks you Sonja for your understanding and commitment to making things right. Employees at the Riggs and Power location need to clean up the space and get re-trained on how to use the computers and printer.

Friendly and helpful with the trailer.

Very friendly professional service from Timbo and Raul. Will definitely recommend them to others!

Would not recommend anyone to do business with this company. We rented 2 trucks. When I returned the first truck, employee told me to park it in back, I did that and had to go back to our house to retrieve the second truck, while I was getting the 2nd truck, I received a nasty call from an employee chewing me out for leaving it parked in the back without leaving the keys. He kept on and on chewing me out, finally had to tell him to stop yelling at me as I didn't do it on purpose, and it was still our responsibility until we turned keys in, but he still kept on getting more mad. My wife arrived there before I got there with the 2nd truck, employee finally came out and apologized but still left us with a bad experience.

The guys at the front desk were absolutely outstanding. Extremely friendly and very helpful. I'm looking to buy some things just so I can rent another uhaul to move it.

The next time please do not confirm a reservation for a specific location without confirming if the location has availability. It was a very big inconvenience and very misleading. The agent provided a specific address and location, i arrived and they had no trucks available. Fortunately once i contacted Uhaul they were very apologetic and assisted with confirming availability with another location within the city. Overall the customer service was pleasant.

I signed up for early pick, but was told that there U haul person didn't come in till 9 am. They were rude, uncooperative and refused to answer any questions or help me get any help from U haul direct. The unit had damage that was documented so I took it and went to move.

Raul was great and a huge help!

Raul accommodated my weekend need without issue. I appreciated the excellent customer care.

I don't think that I can improve on the very courteous and professional staff that helped me today. I in fact told them that when I dropped the trailer that I had rented back at the office. They were exceptionally kind to me. I will use this u-haul office in the future and recommend them highly to my friends and neighbors. Patrick Kane

this is a new building and very nice

Nothing. By far the best customer service from a U-Haul store ever received.

The service was so excellent, customer service very friendly and professional, have no complaints

Great service, I would go back every time

So far so good. Keep up the professional jobe ethic.

The rental guy was great but the truck was dirty.

The gentleman that helped me was very nice and professional and completed my transaction quickly and hassle free. The truck was in great condition and served my needs. I would certainly return and recommend to others.

The staff was friendly and helpful and the service was speedy. And the price was not great but 0K. Good experience!

Tim went above and beyond to make the drop off process easy!

Fire the U Haul management.

Employees were quick to greet me. I explained what I was trying to accomplish and the solution was quickly determined. I reserved the trailer for early the next day. Employees helped me hook up and I was off. Hours later I returned and checked back in quickly. All in all, a good experience.

They did a fantastic job, no issues whatsoever and it was on short notice!

Manager was very helpful and explained different options and helped me decide the best product for my needs. Worked out perfectly and pick up and drop off were quick and easy. Highly recommend this location.

Excellent service by Raul b

We have used this location several times and will continue to do so.

This location has got equipment at one end of a small shopping center parking lot in front of other businesses and it was a bit out of the way vs the other location I originally booked at. People were a bit less customer friendly than other U-Haul locations I have used.

Had to wait in front of a guy who couldn't put someone on hold for 2 seconds and acknowledge my presence. There was a second guy who I thought was a customer but turned out to be an employee there. Only helped after I waited 10 minutes to talk to the guy on the phone about returning my rental. He could have just asked what I was there for. It was one of those mom and pop locations that sold car parts and did uhaul on the side. Maybe they can do one or the other, not both. Plus the lot is too small...

Nothing. Moving is stressful and my experience at San Tan Rentals was quick and painless. 5/5 Great Job!

Friendly staff who fully explained everything. No surprises here.

No problems at all. Very good experience.

It is a complete service center and the people there are very helpful and informative.

There was another person renting a uhaul when I got there, they had to enter his info 3 times because they kept loosing information or the system wasn't working, they have really poor internet. The inside (cab) of the truck was dirty, they should clean the cup holders. I asked if I could not return the truck right at 4:30 would that be okay, they said yes, totally fine, we are flexible, just park it under the gas sign and put the key in the drop box (I was never told if I dropped it off a little later, that I'd be charged another day) or I would have kept it another day!!! I also had a VIP voucher code that they said over the phone, they'd take, then when I got there they said they couldn't, they couldn't enter a certificate code in the system! Which is weird BC you can online. Then I asked how I'd get credit for the voucher if i turned the truck in after they closed, they said they couldn't write the code down that I needed to get them the certificate!!! My friend who works at Uhaul called and spoke to a manager who said he would make sure I was able to use the code and that he'd note the code in the system. So today I get my receipt and I was charged 2 days of rental and no voucher entered!! Also, when I left uhaul, as I was driving out, I noticed there was a toy haul light on. So I stopped and asked one of the workers what it meant and how to turn It off, if it was okay on... His response was "I don't know why its on, or how you turn it off but you should be okay"!!The entire experience was frustrating and the staff are inexperienced.

Worked with Tim @ this location & he was amazing & so helpful!!!

They had no destination for return. Also used it one way to Texas. They marked it local use. Way under quoted price.

We received courteous, timely, professional assistance from this location. The reservation was easy with them, and the truck was ready when scheduled. We even forgot our car keys upon returning the truck and they kindly held them for us to pick up. Highly recommend!!!

Raoul was extremely helpful and polite. We will definitely go back there for our Uhaul needs. Thank you, Sheridan Chumley

The customer service was amazing. Every person working there was very helpful, especially since we didn't know what we were doing.

My local UHaul shop is San Tan Rentals. Good guys who take care of me.

AC did not work.