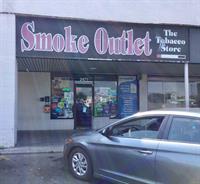 Joseph Morgan gave me great customer service, and Dave boske aided in the process too.

U haul over charged me on Saturday by 85 dollars and I have NOT yet received my down payment/holding fee for truck rental. I want my money now or expect to hear frim an attorney soon. This is ridiculous, the man at The Smoke Outlet had no idea of what hw was doing amd just keep telling me..."just give it a few day". Well its been more than a few days and I WANT MY MONEY!! U haul had no problem taking my money...now give it back. HORRIBLE!!!!

It was really the associate. He was awesome. Canâ€™t remember his name but very helpful and trying to help many people at once. Awesome!

Lied about amount being charged, hung up on me when I called inquiring about charges. Told me to call uhaul

I arrived at 8:45 for a 9 am pick up. The guy arrived at 9:02, and needed to "open' the shop before getting to help me. I had movers at my house at 9:15. I was not able to leave the pick up location until 9:27, ridiculous! The return process was just as difficult and annoying. If Could have given 0 stars I would have.

The owner was extremely pleasant and helpful. The experience was easy and fast with his help.

Make sure trucks are clean,some one need to demonstrate the equipment to the customers

The truck was filthy, they didnâ€™t have the appliance dolly that was on my order. The only reason I will still use U-Haul in the future is because the location on Sinclair and Morse in Columbus not only gave me a dolly but the manager came out and personally cleaned the filthy truck for me. He was so kind and if I ever need a U-Haul in Columbus Iâ€™ll go straight to the Sinclair rd location in the future! The woman who answered at the 800 number for U-Haul was also very polite and understanding of what was going on and made up for the huge inconvenience the best she could. Was my experience worth $107 dollars no because I have never got a filthy truck from any U-Haul reservation in the past, but at least U-Haul restored my faith in the company as a whole without a hassle. Iâ€™ll never use the location at the smoke outlet on Dublin Granville ever again though!

Just the queue in the shop

Clean the equipment. It was reeking animal fur and cigarettes. Plus dashboard had a check engine light on. Was scared equipment not to breakdown on me!

The pick up location was not of my choice. It was a relocated area the day before. It was a smoke shop with marijuana smoking bowls for sale. The area is town was not safe. It was trashy and messy. Very unorganized, the teller said his brother owned the store and he was out of the country so he was filling in.

I've sat on hold for a total of 57 minutes trying to get help I was unable to obtain thie original reservation that was for 3 hours prior so I had to drive to another location This was the absolute worst experience I've ever had and I will never rent from U-Haul again. I made a reservation for today at 7 p.m. at one of the locations near me the reservation number is 25133 799. When I got to the location the technology kept malfunctioning I downloaded the app after about 25 minutes and I also call customer service and stayed on hold for a total of 40 minutes with no help the app told me that a vehicle had not been attached to my reservation I was late picking up my item because I had to rush to another U-Haul store nearby to get an additional truck I just spent 1 hour attempting to return that truck contract number 93358328 and the app would not accept any of the pictures this is terrible and once again when I call customer service I sat on hold for 17 minutes before I could let someone know I was having issues returning the truck it's just unacceptable service customer service all around everything was bad but I do want someone to know that the truck was returned at 9 p.m.

Can you make the truck smell better.

The truck was trashed there were dirty bottles every where and the back had trash in it. Also i was charged $43when it was advertised $20 for 4 hrs. I returned it with the exact amount of gas and yet I woke up the next morning only to find out I was charged another $8!!!!!!! I will never use them again EVER!!!!

I was very upset the location that I requested was changed, because I was paying by-the-mile, and this location was about 10 miles further out than I had anticipated. It ended up being about $20 more than we expected, so I was pretty frustrated.

The guy who did my order was so unhelpful . I understand this is not a typical U-Haul branch, but this place shouldnâ€™t even be a satellite. I came in on time to pick up and the guy kept putting other customers of the store in front of me . When he finally pulled my order up, he claimed my card wouldnâ€™t work yet continued to keep swiping it . I had to tell him to tell him to stop swiping my card and told him I would pay cash . He told me I would need a $100 deposit to pay cash . I go get the money off the same card he said wouldnâ€™t work, came back , and he took my money . After he took my money , he said â€œnextâ€ customer , he didnâ€™t even give me the keys ! I politely told him I still needed the keys and he seemed so annoyed as if I was supposed to get in th U-Haul with know keys and hope it magically started on itâ€™s own. I get in the U-Haul and itâ€™s dirty, cigar buts inside cup holders and the back of the truck had all kind of debris left from whoever had it last. When I went to take the truck back, he told me I had to take a picture of the dash to see the mileage and gas. I go out take the picture , bring it back and he tells me the picture isnâ€™t good enough even though the gas and mileage were clearly shown . I go out and take another picture and bring it back in to show him. He says he canâ€™t see it and ask me to hand him my phone. I hand it to him , then he starts pressing the screen and scrolling , I ask him what heâ€™s doing , and take my phone back and he had exited out of the picture of the dash, and was scrolling through my pictures !!! Becoming irritated I just asked him to give the balance of my deposit. He pulls up the refund screen and the instructions on how much and how to refund me weâ€™re clear as day . When he typed in the refund amount, he was actually typing the price of the rental. Before he hit submit , I told him the amount was wrong , yet he still tried to submit it! It wouldnâ€™t go through so I read the screen to him but he still didnâ€™t understand and kept trying to put the wrong amount in . I told him again the amount the refund should be for then he finally put it in correctly . I couldnâ€™t wait to get out of that place, never again !

I've never rented a box truck that stunk so bad -- almost like the previous user was hauling trash. The rep at this location couldn't explain reasons for additional charges (I.e why the insurance was double the original agreement).

Have a representative that's more knowledgeable about the renting process

Service was horrible. I had to show them how to check me in. I think he may have charge me extra for some reason as well. The truck questionable. Right mirror was broken and kept sliding out of place so I could not see. EXTREMELY dangerous. I was highly unhappy and I doubt I will ever rent a u-haul again. The most frustrating move I have ever had. I honestly should not have drove the truck. The mirror made it so my passenger had to lean out the window to check my blind spot consistently. Horrible service. Horrible truck. Could not be more displeased.

I would highly suggest looking into this location. The gentleman I dealt with was kind but I do not believe anything was done correctly. I never received any paperwork as well as the ticket I received was the drop off check in ticket not the ticket I should have received for picking up the truck. There was a furniture dolly inside that I did not order or need as well as there was damage to the truck that had been from a previous user that was not noted by the personnel at the pickup location. I would never recommend anybody ever use this location for any U-Haul services.

They kept giving us the wrong key. They were rude and sat behind the counter watching tv 15 minutes before helping us. They told us to take a picture of mileage so we did they then didnâ€™t believe us and walked back out to check it and took us 25 minutes to check out. Did not speak English adequately. Not a good look for uhaul will not be renting again.

The location took cash payment & also charged my credit card, I finally got the cash back! The wait to get the truck was long & it also took a while to return it! The associate working there is not friendly either, what happened to checking over the equipment w/ the customer?

U-haul Manager was very helpful and positive. The site was in a convenient location. It was a busy convenience store with much activity. It took us some time to be processed.

U-Haul is undoubtedly the best!

I could not find this dealer - they had no exterior signage and were located in the Smoke Outlet? The store was a mess and a very unprofessional experience. From a branding perspective - UHaul should evaluate this location.

Overall wasnt bad execept for charging me 3 times the rental amount and then saying i had to wait 5-7 buisness days to get my money back!!! Charge the correct amount next time would be helpful.

The smoke outlet was super in their customer service

Ordered a 2 bedroom truck and they gave us a studio 1 bedroom truck..so 2 trips instead of one...the mileage reader just had words on it couldn't read the mileage

Store manager was not familiar with using the uhaul website. Charged me for 4 miles more than I used, didn't notice until I looked at my receipt after I left. Was advised by store manager not to leave my car in the parking lot while I had the truck as it was not a safe location.

Please work with your 3rd party associates on how to recognize when a customer has did a online pre-check in to speed up the truck pickup process. The person who helped me didn't seem to recognize this and kept asking me for my credit card like I was checking in & purchasing the truck for the 1st time. Took way too long. It's like online check in didn't matter.