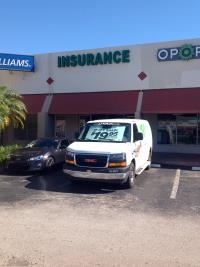 The truck was great, but this location is a mess.

While it was open on sunday and that was convenient, the truck was DISGUSTING. The AC worked well but it was filthy dirty outside and inside with trash and sticky dirt all over the van. The seat felt so gross.

Really bad service. Bad aptitude and did not have some items that I reserved with 2 weeks in advance. There is a very long walk to pick up the truck from their office. Besides I had to go thru a long process even though that I already registered and paid everything onlIne.

My previous experience was terrible due to the person i dealt with at the location but the gentlemen i worked with on this occasion was extremely professional and polite. I was just not able to complete the drop off forms from my phone, the app said i didn't enable location services but i did.

Been doing business there for Years, Highly Recommend

The mobile checkout did not work and we had to go inside the office and redo our reservation. The UHaul site was not working so it took much longer than expected.

Terrible customer service and unclear communication. I got to this location, after flying in with an associate, to pick up two 26' trucks I had reserved over the phone. I had to wait 45 minutes to pick the trucks up because the kid working that day was at lunch, which made me miss my scheduled pickup time with the City of Miami for equipment I'd purchased. When he finally got back he waited to tell me until I about signed my contract that they only had one truck available for me. They found another truck for me 25 minutes away that I had to Uber to, which further delayed my pick up time. Advice for the next customer is don't pick up UHaul's at shady insurance spots in a strip mall.

Everything good, keep it going

Staff was very friendly and helpful.

Cleaner office and friendlier staff. The vehicle was unlocked when I got it and not very clean.

I was overcharged by one extra day and an extra 10 miles. My total charges were supposed to be like 73.00 and they billed me 152.00. I'm now trying to get my overpayment back from Uhaul.

I did a night online pick up and there was very poor lighting. also, the location of the truck parking was very far from the door. the return was more scary because I had to walk far in the dark creepy back alley to return the key.

i reserved this truck via mobile pick up and it was the biggest mission ever the key was not were it was suppose to be and the information details of where to pick up the truck/key was not correct/specific at all. I will not use this service again i rather go to a store and rent it directly with someone the mobile pick up is not a good option for customers.

I have extra chargers that I'm having trouble with.

The truck cabin was dirty. When we opened the cargo area, the dolly we had rented in our contract was missing. Since we picked the unit after hours we had to go next day at 8am to retrieve a dolly. The person who attended us, Pete, said he had no Uhaul dollies available Ana after a bit of debate, he reluctantly lent a Dollie they had for their store use. Later that day we had to call 800 Uhaul service to extend our reservation for 1 additional day. The experience with the 800 representative was excellent and had no issues at all. However, the next day when we returned the truck to the facility, the experience was far more worse than the first one. We returned the truck between 1:45 pm and 2:00pm, Pete didn't want to check the truck return condition or close the contract. He made us take the dolly out of the truck and bring it to the store, park the truck in the designated area behind the shopping mall, and drop the box in the night depository. He said he would send us the receipt by email at the end of the day. What happened was that we received a bill for 3 days of use stating that the truck was delivered on Tuesday Dec 3 at 8:07 am, when instead it was dropped off Monday Dec 2 at around 2 pm. The miles ridden and gas consumption were correct but the amount of days were incorrect. After numerous attempts of reaching Pete, he assured us that it was an honest mistake. That he would credit my card for the 3rd day. As of today we're still pending the credit back. We had to contact Uhaul directly and open a case because Pete is missing in action. As I final note, we were able to locate him but he referred us to his boss and said he could not do anything. Bottom line, stay out of this location for doing business. I have rented many times with Uhaul before and had no issues at all.

Fast in and out.

You deserve a better facility!!!!!

Send new equipment and dollies to this location.

The guy working at the location was very nice, thorough and made sure everything happened without any issue at all.

Truck was not inspected, horn was not working, electric panel not working and lights in tow were not working either, transmission slipping, gas tank cover detached and hanging beneath the truck. Trip delayed several hours due to these issues that road side assistance wasn't able to fix.

Great service, I would gladly recommend this Uhaul office.

We used for 1 day and they charged us 2 days

The car was parked a quarter mile away and it was filthy. The tail light was not working and I got pulled over by the police for the tail light . When I called them to tell they said they had not checked the car before they gave it to me .

The truck was showing a warning light. The location and the service at the site was very good.

All is sÃºper good in this place

It was a very simple process from start to finish, Javier was excellent, will definitely recommend and use this location again. Thank you....

Truck was perfect, location was easy to find, staff was extremely helpful!

Not only did I find the truck totally a mess in the back, but after driving just 4 miles for my entire rental period, this location charged me $11.25 for gasoline. I have photos of the dash prior to renting and then after and the gas gauge did not move. I tried am calling the location and after keeping me on hold for 15 minutes, they refused to pick up the phone each time I called after the first time. I will never recommend u-haul again not will I ever rent a u-haul truck again.

The truck had garbage inside.

Keep doing exactly what you're doing. The service girl was prompt, courteous, attentive and professional, both at pick up & return. More companies should provide this level of quality!