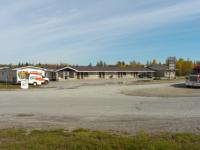 5 days after returning the truck, I am STILL waiting for my deposit (as well as 3 phone calls to Uhaul).ðŸ¤¬ðŸ˜¡ðŸ˜ª

Nothing to improve on, very professional service.

Not happy, Thunder Bay Uhaul counter confirmed 20 foot truck to pick up in Thunder Bay for my move to Elliot Lake. I received an email confirmation etc of this then the day before I was told there was no 20 foot trucks in Thunder Bay and had to drive to Longlac a 4 hour drive one way to pick the truck up. When I called the counter in Thunder Bay I was told he didn't know what I was talking about and I only asked for a price basically calling me a liar. See reservation below he sent me: Order Summary Rental Equipment Reservation #: 96698571 Preferred Pick Up Location: Furniture Recycle 133 Hardisty St N Thunder Bay, ON P7C3G7 Pick Up Date: Saturday, August 22, 2020 at 10:00 AM Drop Off Date: Wednesday, August 26, 2020 Equipment: 20' truck

We sat waiting for three hours waiting to pick up U-Haul and trailer. Nothing was ready. Was all snow covered and cold. The U-Haul was Extremely dirty and came with no gas. The owner didn't know we were even coming. Then he said he would us a discount but we didn't get one. I lost a whole day trying to deal with uhaul. Talked to multiple people on the phone. Was not pleased at all.

There was no one on site when I dropped off the vehicle and therefore I have to figure out how to received my deposit. I was not home for over a week after the move only to return to a phone call saying that I have to contact uhaul for them to issue me a cheque. I was assured the deposit would go back into my account when I returned the vehicle.

You can help the customer take the trailer off vehicle. would have preferred to be involved in the drop off inspection and walk away with a document that says I returned the trailer in good shape.

Customer service was VERY slow but guy was nice.

My god it is so great at this dealership and he is mighty fine looking too!!! LOL !!!!!

Look after me right away,as this was an add on to my Truck rental. Very accommodating.

Uhaul was at three quarter full only, very hard to get it back to only three quarter when dropping off. I had to fill it up when I picked it up as I was not certain how hard it was on gas and I had over two hours to drive without any gas stations. After driving 10 hrs to pick up my U-Haul, I then had to fill it up before I started my journey. Not impressed. Then when I drop it off I think it's close to three quarter and not close enough for you guys and I have extra fee. Also, I booked a smaller truck 3 wks prior to ensure it was available and three days before I pick it up I'm told it's not available and I get a bigger one at no extra cost. The problem is, the bigger one is much harder on gas. It should have been full when I picked it up and it would have been much easier to fill it up then TRY and only get it to three quarters. Not using U-Haul in the future and not recommending this company to anyone.

Best dealer in Uhaul. LOL Nothing like pumping your own wagon!!!

There was no one at the office, left the trailer in the lot.the person there said "the owners were on holidays"

When I arrived at the location there were 7 of the trailers that I needed. It look 6 tries before one had working lights. I phoned the Uhaul dispatch after trying 5 and they said it may be my wiring on my vehicle, which was not the case because on some of the trailers the left signal worked and on others it didn't, etc. However, finally one worked. It was an odd experience picking it up and having no one there to help in anyway.

My experience was excellent and I can't think of anything that you can do to make it easier or better for the next customers. I would recommend using UHAUL to anyone wanting to move.

Add drop off address on contract. Had to call U-Haul and was told there was specific drop off spot.

Showed up at 10am and they were closed. Had to call local manager. First trailer had light issues. Had to load and secure my car alone. Had to chose this location because my home town had no trailers road worthy. Had to change route and hotels and deal with a rougher route. My wife had to follow me 3.5 hours to the Longlac location. I was not impressed

There was no one at this location to pick up the trailer at the confirmed time of 3:00 pm.

I was never shown the milage before i left the parking lot-therefore i feel that i was somehow cheated into paying someelses milage and/or carelessness!!!! Not a satisfied customer at all !!!!

Man oh man this is the best uhaul dealer in America!!!!!

The location was closed at my pick up time and the phone number left on the door went to an answering machine. Lucky I was able to call and complete the transaction over the phone from uhaul main office. Later that evening the person called me back and apologized for the inconvenience.

DEALER WAS VERY HELPFUL NO COMPLAINTS THANK YOU

my confirmation was for geraldton pickup and thunder bay drop off however they called me two days before i was to get the truck and told me i had to pick up at longlac and i had to drive the truck back to longlac they in turn would reimburse me 120.00 which i ended up in the minus as the gas to return to longlac costs me more than $120.00 plus i had to get someone to follow me back to longlac from thunder bay and take me back to thunder bay not impressed at all did contact the district manager for northwestern ontario about my complaint not happy

Great help and advice. Answered EVERY question I had

The location was fine. I was not impressed with the phone representatives at the Winnipeg office. Each time I spoke with someone they seemed to have different information e.g. 6hour rental became 24hr rental. I also had an issue where I had told one representative that I would like to pick the trailer up 10am which they said I would arrange with the location. The location never answered their phone. I called the Winnipeg office again and was told my location does not open until 3pm on my pick up day and I needed to arrange to pick it up that evening. Very confusing. However I had use of a trailer, unfortunately not my preferred choice.

I arrived at this drop- off point one day early, entered the office and all the representative could do was immediately start complaining from the last time I had rented a car dollie from over a year ago! I filed a complaint then due to the fact on our moving day, my wife's car broke down so we were forced to rent a car dollie on very short notice, we had already rented a truck from here so I looked on line and it stated they were open that day, I travelled to Longlac and the office was closed. I made numerous phone calls, left messages, but to no avail, I contacted uhaul and made 2 or 3 calls back and forth and was finally successful in renting a dollie over the phone. This put us about 5 hours behind on our moving day. I explained this to your representative in Longlac why he got the poor customer rating, all he did was accuse me of being un- reasonable, he never did show up that particular moving day where it stated his "OPERATING HOURS OF BUSINESS". When I dropped off the car dollie this time, his complaining turned into an argument, he told me in no uncertain terms he " WOULD NOT RENT TO ME AGAIN". I feel he was extremely unprofessional, I made it clear that I would rate his business with Uhaul poorly once again, totally unacceptable. Regards Doug B.

he charged my credit card $44.01 more than agreed

Location is not staffed full time. This is the only reason I would not rate it excellent. The dealer was awesome! Very friendly and helpful! A pleasure to deal with.

The rep at this location was very helpful, made a couple of good suggestions and I look forward to dealing with him again.

although, I had a reservation for the equipment, the customer relations worker present was very informative and friendly but I did not require the equipment and returned it to his other site, he was very courteous and understood the situation. Excellent service. Thank you very much. Still looking forward to my other reservation and see how that works out.

The gentleman I dealt with at this location spent 1/2 an hour searching for my requested trailer needed.When we were unable to locate that he contacted his superiors and approved a better unit for the same price. BRAVO fantastic to deal with friendly speedy service. EXCELLENT customer service.

Might have been an isolated incident, but the rep for u-haul was not there for our rental of the car dolly we needed in Long Lac Ontario when he was supposed to be,In fact we were left making numerous phone calls in an attempt to track him down to process our transaction. Wasted 3hours of value time to no avail. I commend one of your phone reps for finally authorizing the release of the car dolly, so thank you for that. The rest of the experience with u-haul was excellent including the equipment. I would rent again, just not from Long Lac Ontario.

Excellent service-this was my first experience renting from U haul-very positive, very professional Thanks again Mark

the service was excellent

I have never had such poor customer service in my Life! Your company ruined my move and cost me extra gas money and valuable time. Your winnipeg office confirmed that I would have a truck to pick up in Longlac Ontario, so I drove 3 hours to get there only to find out that the truck was given to someone else by the owner of Your Way inns. Uhaul offered me a trailer at a cost of 25 dollars (which should have free) the trailer was too small causing me to schedule another 8 hour trip to finish my move. The people in longlac would not even come out of their hotel to give the required paperwork. They sent a mentally challenged individual out to assist me. I asked him if there was any paperwork to sign and he said no. So i left with the trailer only to find out later that the police could have charged me with theft! I don't understand how your company can stay in business with this lack of customer service - Mark Larsen

Trailer lights did not work.

did not know that we could drop off the uhaul in St. Stephens. Told us that we had to go to St. John instead