Adaptive Reuse at U-Haul of Stockton

Adaptive Reuse in Stockton, CA at U-Haul of Stockton 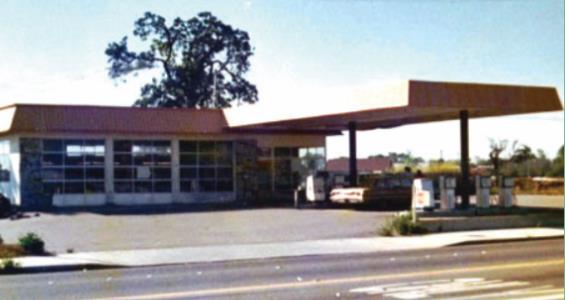 Gulf Oil was once one of the world's largest oil suppliers and even earned the reputation as one of the "seven sisters of oil companies" for being a major contributor to the entire world's supply in 1985. William Larimer Mellon of the Pittsburgh Mellon banking family was the largest investor in a discovery mission that struck oil in Beaumont, Texas in 1901. Inspired by this unearthing, The Gulf Oil Corporation was formed in 1907 through the conglomeration of a number of oil businesses, principally the J.M. Guffey Petroleum and Gulf Refining companies of Texas. The companies name "Gulf"  actually references the discovery location, which is nearby the Gulf of Mexico.

The original gusher site, on Spindletop Hill, reached a peak production of 100 000 barrels per day before the supply began to decline. The company was then forced to find additional supply channels, so they constructed the 400 mile Glen Pool Pipeline connecting oilfields in Oklahoma with Gulf's refinery at Port Arthur. In 1910, they continued to expand their search for oil and built the world's first ever water drilling operation. In 1913, Gulf became the world's first oil company to enter the consumer gasoline market and open their own drive-through fuel station. Shortly after in 1920, the iconic orange disc logo was introduced and became iconically recognizable as part of the Gulf gas station imaging.

The Stockton Gulf gas station building was built in 1957 and U-Haul acquired the buidling in 1975. U-Haul converted the location into the very first company owned store that provided truck and trailer sharing as well as moving products. Up until this time, U-Haul relied on dealer locations which were local businesses who agreed to add one or two trucks to their lots and a U-haul dimension to their business.

Energy-efficiency and waste-reduction programs at this facility provide the following estimated benefits each year for the Stockton community: