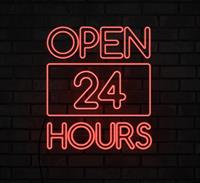 Location and James were amazing, the tires on the truck were garbage and we got stuck in our own driveway. He came out and helped us. Then when unloading the battery on the truck died and we couldn't get it boosted as we had driven it in and cant access the front. Equipment may need some tune ups however it drove and rode extremely nice and was very clean.

I returned the truck after hours but there was no key Dropbox. Fortunately a staff member showed up.

Best service at a rental agency ever

I think the location here is right on track very good service thanks.

Way different experience. This owner actually seemed to care about his work although is still connected to uhaul. But after I dropped off The vehicle, uhaul sent me an email saying I was 3 hours late.?! This company needs to get serious about what they do because they certainly do not care about the customer. And it was also way cheaper so I guess you get what you pay for.

Rented a truck had a beer can under passenger seat looked like a daily driver brought it home. I'm guessing I didn't have enough on card for second day they came got the from my yard the truck was clean washed back box out that night payed 100 cash to make sure the truck was full of fuel never got a recept they told me everything was OK and when I get my card balance up I was good to go. Now they send a bill to collections for $422 the truck was booked on the 9th picked up on 10th and then called in for another day at 10pm Jake they said the card was used to get the truck then declined in 11 and being billed for 2 days and $ 150 for cleaning like where my $150 for cleaning beer can and if it had some dirt on the mat dident have a chance to clean or fill it how was I supposed to know card ran dry they are on drugs and as for lockers I rented one for a day put a few things in to it and next morning, half of town knew your stuff not safe and think twice before giving a visa they all sound nice ya sure your ok all good 17 days later you have a bill bigger then card limit.

Experience was good overall, James was his usual helpful self. Thanks.

Location was easy to find, attendant was very knowledgable and helpful, went above and beyond.

You could improve the traction of these trucks, those poor fellas in the yard couldn't get them up a small little hill. It was scary lucky for me I didn't go over any mountain passes.

By far the best location and customer service ever. The owner there was smart, funny, easy to work with and got everything sorted out for me. I was worried cause before him I have never heard anything good about the company.

I would highly recommend this location, not only was James helpful, understanding, and perfect on the eyes. He also let me use his wifi to finish up my work. Truly an amazing rep for your business.

This was a great experience. Had the trailer on the hitch in no time! Easy peasy! Will rent from here again!

Not only is James very helpful and knowledgeable. He is also very easy on the eyes. Quite the handsome cowboy

Everything went very smooth. Highly recommend this location. Thank you!

The site was clean and organized, James had the truck ready to go and it was perfectly clean. Returning the truck was quick and painless. We went through the vehicle and it was class A-service.

French fries in cab of truck. Box dirty but that didn't bother me as I wasn't hauling much back there. Truck needed front wheel alignment and steering felt loose like it needed some work.

Employees are very helpful and informative.

It was good service by the dealer , but when i got the uhaul trailer where i was going i was going too load it was dirty with leaves and branches and oil on the inside so i had too clean it out the best i could at the time and when i went to drop it off I showed the guy the picture of what was in it and he wouldn't except it the way it was so i had to go steam clean the inside at my cost ??

James provided excellent customer service. He called when he thought the trailer might be late.

Maybe have a few of the smaller vehicles available, since that area has a lot of customers who ride motorcycles and we don't need a 20ft cube van to transport a bike. But it all worked out and the staff was very friendly.