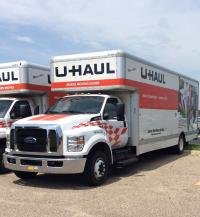 I was billed twice, nobody seems to have been able to get me answer. I think I have been passed off to 4 people now. That's horrible customer service. Everyone that talked to me said they could see I was charged twice, but none of them can fix it, so I'm about 150.00 in the hole because nobody can fix the error. Now I'm waiting on some branch manager to approve that it was doubled charged. Jeez, everyone said they seen it! FIX IT!!!!! This is the worst customer service I have ever seen in my life. Your smart phone check in is a joke too. After going through all the steps it still made me go to the store and show them my phone, and then she released the keys to me. I would not recommend you to anyone. I'll be sure to let others know about my experience with your company. You should be ashamed.

I called a month in advance to Bloomington mn to reserve, two days before they call and say the closest is Albert lee. I called and asked the person which exit off of 90 do I take to get to you. She told me she didn't know, that I need to look on google just like she would have to do. This whole uhaul experience was ridiculous. The people were rude.

Hard to find, Just a little sign over a door on the back side of a mall

Overcharged me. Instead of $20 I got charged $60. Three times more than advertised. I usually rent in blue earth where they have a flat rate of $20. Next time I will go to blue earth.

Worked out well. Will be using again soon.

The address provide not accurate with the address of GPS. 2 blocks off in the opposite direction from what GPS was indicating. No visible sign that can help you to get there. We called them twice and no one answered. We left a messages asking for instructions how to get there but no ones return our call. And when finally find the place thanks to the help a another business near the area, the lady in Uhaul ( EZ own location) was very impersonal. She was doing other stuff not even did an eye contact with me. After the 30 min we tried to find the place to find a lack of costumer service, was totally disappointing.

I went online to cut my time down when picking up, I think u could even save more time by letting us do more before we pick up the vehicle.

Could not find the place. Not visible at all. When we first called to drop off she did not even mention that they had moved.

Did not deal with anyone at either location, due to Covid 19. Truck share 24/7 was awful. Could not complete process at either location. However, one-on-one customer service, over the phone, was absolutely amazing. BTW, the side mirrors need to be adjustable. As a very short driver, once I moved the seat forward, it took a lot of twisting and stretching to utilize the upper right mirror. Scarry at lane change time!

When I went to return my Uhaul trailer, it had been snowimg quite a bit that day and a it had snowed a few days previously too. It appeared that they had not plowed for a few days. I was shown where to park the trailer and I told the store personnel that there was a good possibility that I would get stuck trying to get the trailer parked where it was supposed to go because of all the snow. I tried it anyway and sure enough I got stuck. Long story short, we had the mall maintenance people help to get my car out along with some other people who were around. The Uhaul store person was pretty frustrated about the whole situation with the lot not being plowed out. She was pleasant and helpful and was apologetic. I feel she handled the problem pretty well.

Weird entrance to the U haul area. You enter in the back of a furniture store.

More weekend availability. We were only moving in town, but had to rent the truck from a town 45 minutes away. Not very convenient, plus cost extra.

It's a drop off. Didn't have to talk to anyone. Maybe a bigger sign. Was a little hard to see but I was given good directions.

We did mobile 24 hour drop off and could not find the drop box, location was difficult to find and then no drop box. When we called, scheduling was already closed so we ended up leaving the keys locked in the uhaul after being there almost an hour!

Don't expect any help hooking up your trailer. And, to add insult, I was charged a "courtesy return fee" by this U-Haul vendor for no reason whatsoever. Called back to the store and the person said that they could not reverse the charge. I immediately called National U-Haul and the charge was removed. The agent at the National Office said the local store should not have done that. Take your chances with the Albert Lea store!!

The truck needs to have it's brakes and shocks checked. The brakes were squeaking and the whole back end was bouncing around. I also don't see why you have to replace the gas used when you get charged per mile already.

It was hard to locate. Couldn't see the sign from the highway, the store was inside a mall. Trailer was very dirty on the outside. Improvements: Better signage OR put directions on their website where to go (inside the mall/behind the mall, etc...)

The truck was so dirty on the inside we had to clean it first and mop it due to very sticky floors. Went to do the fast check in and it took over an hour and 6 calls later