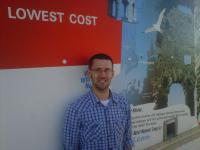 We went to another drop off site first. A single woman running a convenience store gas station. She was renting out a vehicle at the time too. We were fourth in the line. We called these guys closebye. They had us fixed up in 15 minutes. The kid who helped us was friendly and helpful. I forget his name. The friendly Manager also came out too. We had a problem with a locked steering wheel. As I tried to back down.The kid figured out what was wrong and we were on our way.

Antonio was super friendly and helpful

Was very hard to find, not slightly apparent that the RV dealer also rented Uhauls. Friendly service however place seamed run down.

Great truck! I'd recommend calling ahead before driving to the drop-off location rather than showing up unexpected.

They were not organized at all they left me sitting in the office forever unprepared. They couldnt find keys i dont know whatelse they were looking for but took long i almost left and went somewhere else. Also they left furniture blankets just thrown in the back i didnt purchase those. Also the price of the truck went up 120 dollars more than expected from when i checked 3 weeks ago and when i called to ask about it the uhaul rep was kind of rude. And the drop off location they gave me in ft worth was in a dangerous area. Ive rented a few uhauls in the past and ive never had any issues before but as a returning customer i wasnt happy this time

After hours drop off point is in the Ihop parking lot next door!!!! Found it by accident after driving around the block time after time while talking on the phone with uhaul trying to figure out yet another ridiculous uhaul blunder!!

Traffic flow through the property is limited and causes delays

It's All Good Thanks.

I was promised a full refund which didn't happen. Due to the extenuating cercmstances that had happened... I am upset that I feel lied to. Especially when I had the U-Haul less than 2 hours.....

This non-U-Haul RV facility didn't open at 9 a.m. as advertised, instead not until after 9:30 a.m. Standing around at a padlocked gate, waiting for the guy to arrive ("Sorry, I'm running a little late"), and then waiting 15 minutes for him to open the gates, etc. was irritating. And calling me "boss" repeatedly only suggests to me that he's done time in prison. Not encouraging ... or professional. Due to a bad experience with a high-mileage truck (126,000+) several weeks earlier, I asked for and was promised a low-mileage unit (<11,000 miles) that was on the lot. When I arrived two days later, I was told by the agent that "my bosses" (at some other facility) had 'forced' him to rent the low-mileage truck to a "little old lady" the day before and that I'd have to take a 2018 model with 50,000+ miles! So much for commitments. Problems arose: (1) the idle kept dropping off a couple hundred rpm's periodically (about every 10 seconds) while I waited at stops and lights, the engine even died twice, (2) the engine light came on at some point on the several-day trip across country, and (3) on the day that I returned the truck empty -- a day of torrential rains -- a water leak developed INSIDE the cab. There's a grab handle just inside the cab a few inches from the driver's side window frame which has a molded plastic cover in two pieces. Water started seeping in at the seam at the top of the inserted plastic face piece, then dribbling down and dripping onto the dash. Fortunately, this only occurred within the last half hour that I had the truck. Who knows where the water is actually entering the cab's roof. And thank goodness that the box remained dry. This was my third cross-country haul in several weeks. I've noted that the section of the box that overhangs the cab ALWAYS directs a shower of rain or snowmelt runoff directly down where the driver has to be when entering the cab. You get soaked every single time! Whoever manufactures the box for U-Haul should simply add a strip of channel to the side of the "mom's attic" section above the driver's door, mounted horizontally with a slight tilt towards the front of the truck, to redirect the runoff forward of the door. It should be a simple solution to a frustrating and unnecessary problem with all of your boxes, no matter what age or whether mounted on GM or Ford frames.

I rented a car hauler. The U-Haul technician did not connect the hitch to my trailer ball properly and the trailer popped off of the hitch at 75 mph. A claim has been filed with U-Haul.

Anthony was really great. Helped us tremendously with renting the trailer we needed.

The only thing that was wrong with the trailer is I got pulled over because the registration tag was outdated, luckily I knew the officer because my son is a police officer and he told me to let you all know that it has expired. Thank you again I will be back

The person who did the paperwork had no experience or clue what she was supposed to do but had no one in office to train her. She had to call another location several times to ask questions on how to fill it paperwork. Took over an hour to just pick up. Dirty office space and not welcoming at all.

No one assisted with disconnecting and stowing tow dolly. No one asked or seemed concerned if there were issues woth equipment.

Cistomer service was good but the pricing would lead me to rent elsewhere next time.

The woman who I dropped the trailer off to was unhelpful. We rented blankets with the trailer and when I dropped them both off she could not find the moving blankets on the contract. She was not going to check them back in. I had to resolve it myself by calling corporate on my own phone. They were going to keep the blankets and stick me with the cost. Crooked operation if I've ever seen one.

I did your quick check in online yet it still took an hour to get the trailer. The person had no idea what she was doing, and had to call a supervisor. Then when I asked if she could give a discount for the inconvenience, she got extremely rude and acted as if it was my fault for her stupidity. I will never use your company again. I have many other options next time I need to relocate.

This location was great. Very knowledgeable & efficient. Your corporate phone clerks were polite but were very unhelpful. The check yourself in system stinks! Do not let customers make reservations to pickup equipment at a location that is closed. Sataurdays in the summer is a very busy time. Places that rent equipment should be open that day.

The location opened at 10. I was standing near the gate at 10 and the woman working there, smoking a cigarette, was opening the gate and said "Give us a minute to get open" I waited about 15 minutes till they got to me. Then, the woman who was new I guess, didn't know how to finish the transaction, and handed me off to another gentleman. He too wasn't completely certain how to finish, and then a third person, a gentleman, came in and said the traffic had made him late. In my world, if you open at 10, you don't show UP at 10, you OPEN at 10. Then the gentleman that helped me last said that our Lexus LS 460 would fit on the auto trailer, which it did not. It high centered 3 times, so we decided to drive it separate. I returned the trailer the following day and the gentleman at the other store I went to, which was a good experience, when he asked me why I was returning the trailer and I gave him my reason, explaining it was an LS460, he said before I could finish "Oh, those are too low for these trailers." I wish the first store would have known that and gave me proper counsel. Some pieces broke off the bottom of the car when I was backing it off the trailer. VERY disappointed by the Car and Truck Gallery experience.