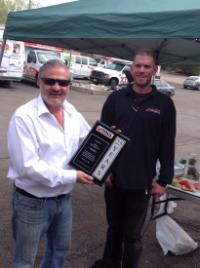 I returned the vehicle transport on July 3rd, as scheduled and was still charged an extra $28.00 (plus appicable taxd and fees) for rental and insurance for equipment that i didn't use for that day.

I had some issues with my light connection. He was great help!!

The most time consuming pain in my schedule was the mess up on uhaul end.the dealer promptly did there best to straighten out.all in all it could have been worse time wise.so kudos to our pick up spot dealer.

There was no one behind the counter for 15 minutes when I got there. Finally when someone arrived he was very rude to me and the other people waiting. He was also not wearing a mask while it is a state mandate. When I came to drop off at 4pm the location had locked doors and I was never given instruction on what to do if no one was there. Plus I was charged an "after hours fee" of $20 and don't remember being told that would happen. Very unhappy.

When I arrived at this location the man how helped us was rude, condescending, and potentially untruthful. He took the time to berate and belittle both the customers ahead and behind us in line, took a personal call while he helped me hook up, and told us the trailer had to be returned to the same location or else. He actually went so far as to tell me I needed to have my UHaul back earlier than my contract time because the return time was too close to his closing time and he didn't want to have to work overtime. He made the experience so uncomfortable that I would rather not rent a UHaul than return to his location.

I turned in the trailer on 6/24 and the contract says 6/26. I just wonder if someone hadn't called me if I wouldn't have been charged

Uhaul had my reservation down for 8am, so on moving day I go and the location did not open until 9am. Not a good start to the day to say the least.

Have the equipment rented in stock. The truck was at this location, which you changed from the location I requested the rental from, but they did not have the dolly I rented, I had to go to a third location to get it. And neither location had my wardrobe that I bought. I never received the wardrobe box at all.

Pick up and drop off was easy.

I cant think of anything i would add. I had a great experience.

Very friendly, informative easy going. Would use them again.

Nothing! Great service. Many thanks.

We were directed to go to 3 different locations to rent the trailer that was reserved.

You charge me for equipment that I did not get or use.

Tom was one of the best people to work with!

Long wait time to check in

When I went to pick up the truck the previous renters had not yet returned the truck at 3:00 p.m.as they were supposed to do. The man told me that they closed at 4:00, but if I wanted to wait I could. They did return the truck about 3:30 and the man at the store told me that if I waited 10 minutes while he checked the truck in, it would be ready and I would be able to rent the truck. Realizing that it wasn't his fault that the truck was returned late, I waited. However, by the time I was able to get into the truck it was almost 4:00 and the truck was filthy. Since the man had checked out the truck before he rented it to me and didn't say anything about the truck being dirty, didn't say anything to me about cleaning up some one else's mess and the fact that I needed the truck that day, had waited to rent it and it was 4:00 p.m., I just took the truck as it was. I used the truck for four hours to move some things, cleaned out the bed of the truck as it was the only thing I had used, filled the tank to 3/4 as he advised me to do, and returned the truck to the lot by 8:30 p.m. When I was filling out the paperwork to rent the truck I asked him about returning it after hours and he told me that all I needed to do was gas up the truck, park it in the lot and put the keys in the dropbox slot in the door of the store. He did not explain the lengthy check-in process that UHaul requires a renter to complete if the truck is returned after hours. Thankfully, I had thought to take a picture of the odometer and gas gauge before I dropped the keys in the dropbox. The next day when I received my receipt by email there was a cleaning fee of $25 that had been added to my bill. I called to ask why and the man told me that the truck was dirty. When I explained that the truck was dirty when I got into it his only response was "Well, you never should have gotten into a dirty truck. That's on you!" I asked why when he checked the truck in why he didn't clean it before he rented it to me, he had no response. I will never use this UHaul rental facility again!

Used online pick-up and drop off so did not interact with anyone, but the transactions went smoothly.

Agents were professional and very knowable. I am very pleased.

Hi, To whom it may concerns, Owner of this shop was very rude, not feeling comfortable to work with and worst part was that he over charged from my credit card. I am trying to take my money back. Thanks Savi

There was some dried mud on the driver side floor.

I did not rent any u haul . why did you send me this review

Everything was great we were in and out! Very helpful putting the trailer on my car! We will use again for sure