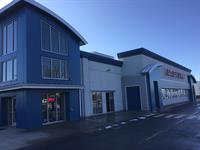 No cell phone service at this location and there was no one available to talk to on site; location worker saw us through glass and ignored our requests for help. Door to building was locked so we were unable to get help here. Pick up experience was counter intuitive.

On line app and process are clumsy and extremely irritating. It is not well thought out. The process requires a mobile device yet the location has very weak AT&T coverage. Why this location even exists when there is a major U Haul location on Havana St is puzzling. Finding the truck was difficult. Finding the lock box was difficult. Terrible location.

I ordered a no contact delivery. When I arrived to pick it up my order said it was cancelled. I received no notification. the store was just closing and the employees would not come to the door to help. I called the support number and learned the general manager had cancelled my order and I was not notified. Lucky the call center was able to get me a U-Haul down the street and I had a very positive interaction with them.

Easy to check out and in using a mobile device. Very courteous owner. No problems at all.

My reservation was changed to this location without my knowledge after I waited in line at the original location I called. This made me run late with the movers. I prefer hands on, face to face. I did not care for the offsite process. I disliked having to drive and find the other site. I called the south Buckley site for a reason.

Customer service rep was rude, and arrogant. He was also a hour late coming to check out the vech. On the day of the return I adv I would have to keep the unit longer he then tried to charge me additional $100 and when I asked why he could not give a valid reason. So after being frustrated I gave in and tried to make the payment then told me to get my shit out of the truck or he was gonna send the police to my current location because I had stolen the truck and then threatened me more and when I tried to deescalate the issue he hung up on me and I tried calling him back several times and he did not answer, in fear of what could happen to my possessions I had to unload my truck 2miles away from my destination address and haul it another way I ended up returning the vech in great shape but the agent that assisted me was horrible. I feel that I am owed an apology and a full refund for the experience that I had to deal with.

the location was fine. but the 24/7 system didnt work. i was delayed by an hour because there was some sort of system glitch and it told me i had to talk to someone at the location which wasnt true. an hour later after my selected time, the 24/7 system decided to work and i got my rental. i wasted an hours time and almost $50 in uber fares to and from the place at the time i was supposed to pick up the truck, and then and uber back at the right time. it was a serious pain in the neck

Call me and I will tell you how bad Uhaul and it's representatives treated me and it's side effects. After over 30 years of using Uhaul, never again. There are alternatives. I will heavily encourage all I know and talk with to avoid Uhaul.

My original pick up location was unavailable so I went to this one. It is a subcontracted sight. The truck had an engine light on when I started it. I asked what it was and at first someone said it could be hot. Then the man from the storage said it was the change oil light. The sub contractor told me to call the 24 hour service if I had a problem but that was not reassuring as i was starting out my move. Obviously the trucks need to be maintained on time, I checked the oil and it was very dirty but full.

Require higher standards for cleaning. We got in and the truck had water and Gatorade bottles all over the floor. Couldn't tell if it had been cleaned at all which was especially annoying and dangerous given the current pandemic. Wished I could've gone to a location closer to my house as well after having to pay such a high price for the extra mileage.

Poor internet service makes it impossible to pick up/drop off uhauls after hours in order to upload pictures and answer questions online. Very very frustrating. Key pick up also has two separate locations with duplicate numbers on the lock boxes which makes it confusing. Staff during hours in the self storage office were very kind however.

The website wasn't working properly, so I couldn't use mobile to pick up my truck. I used my GPS to find the location, but the website said my location was not enabled. The person working seemed reluctant to have to help.

I had a big issue a big challenge trying to do this online after hours. You must provide two phone numbers as in contacts. Nowhere at any time was it mentioned they will try to contact this individual. Therefore they contacted my parents with the number I provided on the East Coast which was two hours ahead Eastern time. If I want to know when they're going to contact them I want to give them a notice. This is something that needs to be brought up. When providing phone numbers as in contacts they will verify them.

no wiper fluid in truck. Front bumper on truck was damaged

We ordered a dolly but when we got the truck there was not one in there so it made our move a little more challanging.

I thought I had paid in full on line. When I went to pick up vehicle I was charged another $77.01. The individual was not able to explain this when asked. Only that it was the unpaid balance. I must've not read the online information well. ???

Terrible location with very little instructions on what to do especially if you drop a truck off after hours. Very sketch location in Aurora. The key drop off box is in a very inconvenient location to where you drop the truck off. I had to drive around the whole building to look for an ORANGE drop off box like it states on the website. It's a small black box nowhere near the area.

Poor customer service. Also since the store was closed and no one told me I HAD to download the app in order to get my vehicle it took an additional 40 past the time I was supposed to get it and I was still required to bring it back on time. Fuck you guys.

The online pickup thing works for shit. I went to pickup my 10ft box truck in a random storage space parking lot and had so many issues with signing into your website that I had to sit on hold with your TERRIBLE, customer service line, that bounced me from person to person avoiding solving the problem for me. I sat in the parking lot for an hour before I was finally helped. Not only was it a super big inconvenience, but it also delayed my plans for moving items into the truck and made my overall day longer. In my opinion, just have someone on site when someone's picking something up! Especially if your over the phone customer service representatives are actually the worst.

Fast and Friendly Service, Professional Atmosphere and Made experience easy even with last minute changes

The mobile process was a little slow but it could have been my service? Otherwise it was pretty smooth and easy process. I was able to change my pickup time last minute by calling the customer service line and rented it for the exact amount of time I needed, which included returning it after hours. Would recommend to others. The overall price was more affordable which also helped!

The truck could have been cleaner in the cabin. Also the online reservation system was very frustrating to use as it kept sending me back to steps I had already completed. There was also some confusion on directions where one page would not include complete return details