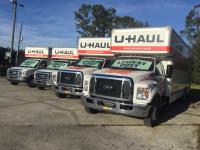 I made a reservation showed up to get the truck and it wasn't there. The lady at L John's was rude and said I needed to call myself she didn't know. I was supposed to pick up at 9am. I called the gentleman explained they dropped off some where else. Which would have been fine if could have known that before hand. He said to be at Bill's Market at 10. I get to Bill's Market to be told the only person who knows how to rent out a vehicle wouldn't be there till after 1030. I wound up leaving there at 11ish. I had a deadline to meet and I just wish the places that actually are responsible for the vehicles rental were a bit more responsive. However, the guy at Bill's Market was polite.

I drove an extra seven miles to this location to pick up a UHaul truck just because of their extended business hours which helped me to avoid having to pay an additional day. Customer service was great! I will use this location again for sure!

I Checked online for it to be faster. That did not happen. It took almost an hour. We had to hook up the tow dolly. We have to sort thru furniture pad ourselves. I paid for 2 dozen. Only got 18. Kept checking out other customer during checking me out.

There was a homeless guy sleeping in the rear of truck. The truck had not been swept out but was told would be fined if it wasn't. The guy who checked out the rental when we picked it up needed the credit card extensively over and over. Causing us concern despite using online checkin he required all my docs again, two phone numbers an email just became very intrusive. Had i not had people waiting to assist us moving I would've left. I've never had such a bad experience With uhaul.

One of the tires had a split in the side wall The inside was clean.

The attendant was friendly, helpful, and took care of our business quickly.

This place was a joke to say the least. I had preregistered but he conveniently could not pull it up. He then tried to charge me $100 over the original reservation. I showed him my reservation and stated that is the amount that I am paying. I was at this location for almost an hour for a preregistered pick up.

Nothing at all. Everything was great. Great customer service as well.

they don't seem like the rest of U haul rental store in the area that only has one box truck. all other rental spot refereed me to Bills, friendly and kind.

I went in to pickup the truck and the gentleman started my request however every time someone came in the store which was at least five to six times he would stop preparing for renter while he sell beer and fried chicken. It was very annoying and prolonged me getting my renter greatly. I will in the future will only use Official U-Haul main locations do to the fact this is not the first time this happened.

The guy was friendly and helpful. The location was terrible to find and i don't have any idea why your U-haul search engine sent us there when I requested returning it to Lakeshore, and the biggest city after that was Lake Wales (where you had many U-haul locations,) and not the secluded Bartow. We called your help line on the 17th trying to returning it on the same day to a closer location, and the operator instructed us to bring it try bring it to any open location at Lake Wales. The guy at Lake Wales Grove Motel, not only did not accept the truck, but was terribly rude to me. I have to go back to Lakeshore (30 minute drive,) and bring it next day Sunday the 18th to Bartow. Because it been so far, and getting lost, we return it at 9:30am, (less than 24 hours later. and have to pay extra late charges.

I arrived at pickup location and didn't have my truck he said u haul came and got them all. Moving day wife 8 months pregnant not fun. We had to find another truck u haul guy no help at EL motel in Bartow he just said call 1-800 uhaul. found another Truck but paid more because dropped off different location. Not happy Bills Market was great helpful and had a truck small then what i needed but worked.

The location and customer service rep was fine. The truck was fine. What made me angry was the pickup location bing 13 miles from the place I was moving from....And having to pay for extra miles because of that.

Small indi agent. Not busy, plenty of room for trucks and trailers. Less than 10 minutes from my unloading destination. How great is that. Definitely will keep this in mind.

The attendant here was very friendly and offered to help me unload the trailer. He even smiled!!! Easy and fast drop off.

I ordered the truck for May 21st at 9am when we arrived to pick up truck we were told to come back later no one was there to do paperwork. Then we were told it would cost 199.97 however $297 was taken out of our account. We called to ask a question regarding dropping truck off they said they didn't know any information on truck to drop it off whenever and they will just add more to our account. We dropped truck off two days earlier in fear they would add additional days on then were told well you still have to pay for those days. I would not recommend this company especially at that location. We even tried calling U haul and could not get an answer.

Trailer was missing 4 way flat plug hookup and wheel bearing cap was missing from wheel and rim was COVERED in axle grease at first location. Would not have made it 200 miles in this condition. Was send to a second location to pickup the the trailer and the tongue on the trailer ball latch assembly was so rusted it took me 20 minutes to get it free to hook to my truck by MYSELF with no help from the facility.Took me over 3 hours to finally get back to my house after all the inconvenience. This is all after the U haul center that I live directly across the street from had promised me a trailer for 3/31 and did not have one for me to pickup Personally I think the entire rental cost on the one should be refunded by U haul as I have used you for over 25 years and this was by far the worse experience ever. VERY DISAPPOINTED!

Probably can't be helped but the employee had to handle me renting the truck and check out customers. The customers were a little inconvenienced