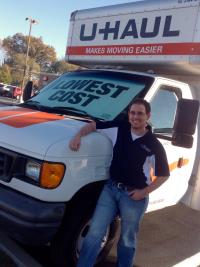 I was double charged by uhaul

Everything from start to finish was great.

Easy to drop off and leave the keys in the drop box.

Not take advantage of good individuals of the time like this

The truck dolly zip tie wasn't checked before we left by the sales associate..we didn't need a dolly ..so when we got back we got charged for it and for some insurance I never agreed or was even asked about..and she said they hold the money on your card until u return it..not true. They already charged me a base rate before I was even finished..I will never deal with them again ..I love uhaul been dealing with them for years but the outside places . that's a no no ..they don't no what they doing..a she didn't even check the miles before I left..I checked it ..but she checked when I came back..that made no since to me..I had to call the uhaul company itself to get this straighten out..she lied and said a he was calling them & when I did it was the first they heard of it and it was a hour later

I was not informed that returning my rental early or after hours that I would be charged for it. And no one seems to care that I was charged when the clerk admitted that she did not disclose that information. So no I would not recommend this location ever.

Returning the truck was a pain in the rear. I completely understand if it was a night drop and no employees were available but I feel that when someone is present they could come look at the vehicle instead of all the madness. That said, I will go to budget or hertz next time only because of that.

The Mailbox Store was closed on the Saturday I went to pick up due to the snow per the posted notice on the door. I was scheduled to pick up my rental truck but was not called to reschedule or give an option at another location. The phone number to call would pick up but stated the person was not there. I called several times. The national 800 number I called helped me get into the lock box to retrieve the key so I could move my mother. There has been no contact from this store whether I was able to pick up the truck. I will NEVER use that location if I would ever decide to rent from U Haul. This location is not only Unprofessional but sucks at customer service. The U Haul app I had to use to get my rental also sucks as I had to upload the information that I had previously had given to the Mail Box Store. App not very easy to use as it asked me to load information twice.

Not ready when promised. Windshield filthy. Was sent here from original area booked for adding more mileage and time and arrived with it not being checked in from previous user so had to wait additional half hour.

It was dirty when it came in and the company didnt have the tools to clean.

She got busy after we came in. Did not give us the option to open out of the insurance. Told us it was due at noon. We picked up at 9:28, so when we returned it we we're charged for another day. This should of been explained to us. So we had to pay for another day plus the insurance for 4 days.

We watched the video link that was sent to us. It was nothing like what was needed to pick up the truck. We get there and get checked in. It prompts us to create an account. An error message comes up multiple times. It took talking to three different people on the 800 number and an useless chat (that feature shouldn't even be offered) to get the information we needed to get the key which put us an hour behind schedule. We were NOT happy. We will never use the 24 hour pick up service again!

My original quote I had when I signed up included the truck, insurance, and appliance dolly. The day of pickup we were called and asked if we could return the vehicle to a different location. When I arrived for pickup the price had almost doubled when the drop off change uhau requested. After that I had them change it back to the same location drop off, the guy at the counter could not tell me why my cost would almost double for doing what was requested. He then notified me that they have no dollys at that location, major inconvenience, although my online reservation did include one.

Teach employees about equiptment ratchet straps on trailer were broke had to stop multiple times to secure vehicle, nobody knew how to drop the trailer so had to load and unload around it when it had ramps, sent us 6 miles out of our way for a drop location when there was one closeer

Right side tail light not working.

All went very well. I appreciated the flexibility of being able to reserve the trailer without a deposit. I was out of town looking to potentially purchase an old car. I was not sure if I would be able to make the deal but if I did I needed the trailer right away. Had I not made the deal losing a deposit for a trailer would have been frustrating. Thanks to the shop owner/manager for being so accommodating.

The staff was extremely knowledgeable and helpful.

The equipment was clean and well maintained except for the tires. Other than that the rental experience was EXCELLENT