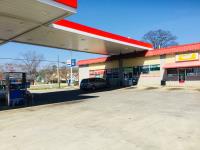 When I make a reservation at U- Haul and if I have to go to a Grocery Store/Gas ðŸš‰.Let me know when I first reserve the Truck.I would be happier.

Person who helped me was very kind and very professional!

This is the worst uhaul place i have ever been to. The UHaul door wouldn't close completely and i had to somewhat hold the door while driving. And when i was ready to check out, the owner of the gas station wasn't there anymore, so the guy working for him and renting the uhaul was so rude, and he didn't understand how to properly check and mark the gas used. Overall terrible experience, it took me an hour to check out my uhaul on return. I for real need my money back, the experience was the worst. Never get uhaul in this place. The company need to do better and not just let random places be in charge of their service. BTW, they have my credit card info and took a picture of it, I'm keeping track and making sure no weird charge is on it.

Pick up in the absolute sketchiest part of town - trust me, I've lived in this city my entire life and everyone knows not to go to that particular part of town past dark; even before dark, you do not want to loiter if you aren't part of the community. The person himself that we dealt with was very nice and helpful. He was professional and did a great job. He saved the overall location rate from being 1 star. The van was atrovious. It smelled like cat pee in both the cab and the back, and there was a giant hole in the roof that my husband had to caulk before we could load up the truck. The transmission sounded like it was going to fall out, and overall it was gross. I will never use U-haul again, as this was a horrendously bad experience. From here on out, we will be going with one of your competitors.

When I went to pick up the truck the truck was dirty and there was someone on the back of the truck asleep. i went to get in the truck and noticed all the wires were hanging out of the steering wheel like someone had stole the truck. When i went to return the truck the guy in the store was so rude and disrespectful and calling us broke bitches and all. The manager of the store called me later that night because i had contacted uhaul to let them know what has happened and that the man at the store refused to take the keys. i went the next morning and turned the keys in to the manager and he told me everything was good. Now i am getting a bill for 116$.This place is the worst and i will never in my life go here or recommend anybody to go here.

When we arrived to pick the truck up, there were a man sleeping in the back of the truck. My husband got in the truck and it was filthy. There were cigarette butts in the cup holder, empty bottle and trash in the doors, even the seats were dirty. We went back into the store and demand it be cleaned, he sent a man out to clean it. I will never use this location again. I will cancel my plans before I use this location again. A very, very, very dissatisfied customer!

Do not change my pick up location, after I personally came a week in advance to schedule and checked in on line the same day. Do not tell me it is scheduled for a 1-way with a drop and tell me I cannot drop this truck off and must bring back to the location. Never have me go to your subcontractor at Graymont Avenue where I must watch the gas station/convenience store clerk serve 20 people while you system made me re-check in and upload stuff I did the previous week. Also, the in store rep at your original facility was a very poor excuse for customer friendly. The absolute worst experience and I have a formal complaint. Call me 205.381-8504. Greg Neil

The location we picked up from was not our original location and despite calling multiple times Uhaul refused to move our truck closer to us. When we picked it up the truck it was a 10' truck and not a 17' truck which we ordered and were guaranteed. Customer service was unwilling to help and told us that we must have reserved it too late even though we made a reservation a month in advance. Do not recommended - I suggest renting from another truck company that values their customers more.

Very friendly and efficient at this location. I was very disappointed that my noon reservation was cancelled before my arrival at 1125am at a different location in Birmingham. I did not receive a call the day before so I filled out everything online and then called the location (valley ave) that evening to confirm (spoke with Aaron). By the way it smelled like marijuana inside at that location, and not just a little bit. Hopefully it was a customer that had been in prior? Very disappointed with the experience up until my arrival at Graymont

The app told me I had to wait to pick up my truck until 8am even though I signed up for 24/7 pickup. I went into the gas station, spoke with the representative (he was very friendly), and waited as he helped me check in with his phone. The signal was terrible so it took a while. On top of that, the gas station had multiple customers where I was asked to step aside (no one was wearing a mask) and wait as the representative put down his phone and helped the other customers. I understand waiting while the phone was loading the app, but I don't understand the lack of PPE. Lastly, I was told there would be 10 furniture pads in the truck. When I looked in the back, I only saw three...still charged for the full 10 pads. My last uhaul rental (before this one) had pads that were packaged up. These pads were grabbed from somewhere and I had no idea the condition they were in (i.e., how clean or dirty). When I dropped off the truck, I filled up the gas tank to the amount that was given to me when I picked it up. I was still charged $10 for not having the "correct" amount in there. I took a before and after photo and I would like someone from customer service to remedy this transaction.

This place is horrible. The owners are rude, cussed me out because I put 40$ worth of gas in the uhaul at their gas station and the needle didn't budge. Threatened to hit me and my boyfriend in the head with a bat. I will never in my life rent from these people let alone a uhaul again! You guys should really review who you let rent out your products, because this should not be an active location !

The individual that assisted us seemed to not know what he was doing and he was extremely rude. I'd already provided the information that he was asking me for over the phone when I made the reservation. When I asked why he needed all of the same information again (including my debit card information) he started an argument with me saying that I was wasting time by asking him questions. Also when I made the reservation via phone beforehand, I also specifically asked if someone else could pick up the tow for me and if I had to be with the person. I was told by the representative that I did not have to be with the person. The representative then asked me for the name of the person who would be picking it up and stated that she'd made a note including that person's name on my reservation. The individual at the location at first said that he did not see the note and would not allow the person (who is my step dad) to pick up the tow. He later stated that he did see the note but still would not allow my stepdad to pick up the tow without me present. The entire ordeal was exasperating and and the customer service at the U-Haul location was horrible. I would never recommend that location and I'm skeptical about patronizing U-Haul at all at this point.

The service was outstanding. I would use your service again.

Reserving a truck online is a complete waste of time. Reserved a location close by only to be told I would have to travel to another location out of the way to pickup the vehicle. Also reserved several add on options, ie furniture pads, dolly, etc, and they were not even on the truck. Had to travel back to the location where I originally reserved to pick up those items and waste more of my time. Overall worst experience with a rental company ever.

Dont rent at this location

They could not produce me a receipt when I returned the truck. The clerk call for help and the man he spoke with assured me I would have my receipt within 10min of the call via text messages. All he asked was that I take a picture of the mileage and the inside of the uhaul and send it to him. As for the Uhaul itself, it would not go over 60mph, the steering wheel shook the entire time, and it would barely change gears.

Better explaining on the mileage. I was a1st time buyer and didn't really know what to pay for or ask for.

Asked multiple times for money from homeless. Distracting when trying to move equipment.

I inquired to pick up at an address much closer to my residence and u-haul sent me to a location far from my area, in an unsafe neighborhood. The check-in experience took over 30 minutes and I may have been charged twice. The truck itself was fine and everything I had control over went very smoothly, but I was unimpressed by the services provided otherwise.

My original contract was with a uhaul company on Ave. E in Ensley, Alabama. It was for 8am. I arrived at 7:57am the gate was closed so i called the number given to me when i made the reservation.. The man said he would be right there, then called me back within 2 mins., and stated his wife was sick so i need to give him 20 minutes or more to get there. So i called the 5 points store. The uhaul answering service answered the phone and honored my reservations and directed me to the nearest uhaul store and they directed me to another uhaul store which had the correct truck size i needed. The graymont customer service was terrible. Store Safety horrible.. 3 women came in running and fighting, the worker didnt know where anything was and the truck was dirty. I had to wait for it to be cleaned out and they charged me for insurance and i explained i have my own full coverage. Then after returning the truck. It took over 45min. To get my cash deposit back. What a big delay, for my planned day ..