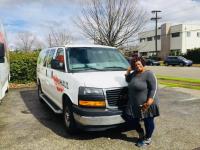 The cab of the vehicle was muddy and had ashes and had not been cleaned. We were charge a cleaning fee and that was very unfair as the truck was dirty when we picked it up. It was also flat on empty and we had to get gas immediately. We also waited outside for a half hour for assistance and had not information about a code. Finally a girl came by that called her mother and at last someone came to assist us. There were not pads as requested and she acted put out that we wanted that removed from our charges. She suggested that we pick them up somewhere else and by that point it was too late to do so.

When you click the address in the email you receive prior to picking up your truck, it takes you to the correct Washee Car Wash. However, both the primary search on Google and the pictures when collecting your vehicle show the incorrect location in Birmingham.

Great service. A bit difficult to leave from due to traffic, but not so bad.

We did online check-in so we never went inside. Process was convenient and hassle free.

I made reservation to pick up at different location and it was changed to this location. I also reserved Friday night pick up time and it was changed to Saturday. It was not explained to me during reservation that I would have to pay miles for the rental. Your reservation process is ridiculous. I've been burned twice and not sure I'll be back should I ever need another truck, van or trailer rental. There's WAY too much competition out there for you all not to have a First class process. You don't.

Location was closed before the stated closing time when I went to drop off my vehicle. I had to then do the mobile app which was an inconvenience to me and my family.

Lady attendant was very nice and helpful, but building was empty except for the lady's desk and not air conditioned - it worked OK but not nice and inviting

the clerk was very professional. I didn't have wait long. my reservation was ready when I arrived. this is the first time I had it this easy with uhaul. Thanks I will return to this location for future services .

This is a scary ass place to drop off a UHaul. I wish I'd been sent to the facility in Vestavia Hills.

Truck not only didn't start, it wasn't ready anyway with the equipment I rented. They wanted to send me to another location instead of just giving me another truck which they did when I asked for it. Took way too long even after pre-checking in. Bunch of yelling amongst themselves. Then tried to tell me there was more gas in the truck than there was. Then continued to argue with me even though she got in the cab to see I was right. Only didn't get a poor rating because check out was relatively pain-free.

The agent was very courteous and helpful. I had preregistered and was in and out.

I appreciated the staff at the 3rd Ave So location for assisting me with renting a Uhaul truck.

Very friendly and helpful staff. Dropped off the trailer and was out in 5 minutes.

None of the equipment was loaded. They needed to clean the back of the truck before they could load anything. Waiting on them to set up the truck after I checked-in with the app took about 40 minutes. They did not have a utility at first then found one but the tires were deflated and they were not able to fix it. Also, the inside of the cab was nasty. Stick drink spills everywhere and bits of food on the floor. I rent a uhaul almost every year... I've never experienced this level of dirtiness and disorganization. Also... on my bill, I was charged gas even though I filled it to gas above what it was given to me at.

Loud and vulgar music was playing when I entered. Not a very welcoming place.

Truck had coffee spilled all over cabin and I was charged an after hours fee for no reason. Inquired by email, as suggested, and haven't heard back.

I was overcharged nearly $50 on moving aids (dollies and furniture pads), both in prices nearly double what was quoted and in items that I neither asked for nor received. Until that's fixed, I can't recommend this location to anyone for any reason. This review will be amended if/when the fraudulent charges are removed.

Do not give a customer a truck that is below E gas.

This location needs to be closed. The only person there was a morbidly obese lady who would not help me remove the trailer and whose lot was so crowded with non-uhaul vehicles that there was no room to back the unit into the space she wanted it put. I am a 76 year old with a bad back and could not remove the trailer from my truck alone. I was about to leave and send U haul a note that the trailer was at my house if they wanted to send someone to come get it. Fortunately for me two Uhaul maintenance employees happened to show up to pick up a truck for repair and they helped me remove the trailer from my truck and push it out of the way. Terrible experience.This place gives Uhaul a bad name

Tire pressure light was on, but there were no issues. The truck was clean for us.