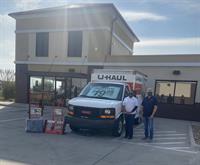 Staff was friendly and helpful. Van was clean and well-kept. Cost was comparable to other places except for mileage costs, which were a bit high.

They were closed for lunch so I was almost an hour late getting the truck when the reservation was for 1145, I was there at 1130 but the door was locked until 1230. The job I rented it for was only a 4 hour job. So I had two staff members waiting around getting paid for nothing until your location finally opened up again.

These people were great to work with.

I just sent an email to U-Haul corporate explaining my scenario. While this location was very kind, I feel as though I was bait-and-switched by the company overall. The location I tried to rent through told me they would price match a quote from Budget that was around $650 cheaper. Of course, U-Haul doesn't actually allow you to select where you pick your truck up. So the day of the pickup, I was sent an hour North to pick up the truck here in Brighton, where they did not honor what I was told about the price match. A representative from U-Haul corporate called me after the local fleet manager escalated the situation, and was incredibly rude and insinuated that I was a liar; also saying he did not have the time to call the original location to discuss this. I was incredulous that anyone in a reputable brand these days would treat a customer that way. There were no other 26" trucks available in the area from Budget by the time they disclosed that they would not in fact price match nor give me any kind of discount. So I drove an hour north to pay $650 more than I needed to for a truck that honestly shook me like a cocktail for 3 days. I will most likely never do business with U-Haul again and would advise against renting their moving trucks.

There was radiator fluid leaking from the rental which was quite alarming. If we would have driven for a much longer distance, we probably would have been stuck on the side of the road from overheating. Better maintenance of their rentals needs to be done

I specifically asked for an appliance dolly since i needed to move heavy stuff 30 miles away from this location. When i arrived to my destination, there was no dolly in the truck so i had to end up carrying all this stuff. When i returned the truck i was told " You need you grab your own dolly and put it yourself in the truck". When i go to a burger place and order a burger with ketchup, noone has ever told me to get off and get the ketchup myself. I am disappointed that i paid over $120 to make it easy on me and i ended up carrying the stuff anyways and could of used my own truck. Lazy employees could of took 2 minutes of their time and put the dolly in the truck.

The windows were dirty.

They took a long time to get my checked out even though I have finished all the paperwork online before, they didn't explain anything to me about the truck or show any support in customer service. They eventually did help put on the trailer hitch, which was the only helpful part. They couldn't answer any of my questions in relation to Uhaul equipment or services. Overall I wouldn't drive all the way to Brighton for this again (even though Uhaul made me because it was the ONLY 15 foot truck in all of Denver area)

Luz was very rude , she charged me everything that she could, cleaning fees truck was already dirty cover in snow from days before , I called to extend the lease she still charged me late fees , she's was very mean never told me anything about extra fees , I been doing business with Uhaul for many years , I received the worse service ever at this location ., she don't even inspect the truck with me when I took it , manager please talk to your employee .

The clerk behind the desk was very nice and VERY busy. She had to look after a Uhaul and storage business. On a Saturday it was just too much.

Very nice. The truck was awesome.

Everything went smoothly except that the size of truck we reserved wasn't available.

Customer service was good, but the van had not been cleaned. The windshield was covered with dead bugs and they wouldnt come off just by using the wipers. I wish the prep person had done their job.

It was very clean and the rep. was so informative and kind.

The on-line check in is ridiculous. After inputting all the needed information when making the reservation, still had to put in addition contacts before getting the truck. Finally went inside the store where we were told they couldn't help us since we started the on-line check in already. As directed by the email to do! Staff said the system was checking references to make sure it's really me picking up the uhaul. What a joke! Apparently drivers license and reservation with my credit card are not enough. Not friendly staff at this location. Will not use this location and do not recommend.

The receptionist was a sweet gal, i think that her companion had a horrible attitude, she straight up lied to my mother about having a van then when e called a different location they revealed they did have a van after all so that was the beginning of our adventure, the rest came with the hispanic lady that worked at that location whose attitude was unbecoming, not only barking at me to wear a mask [which was in my pocket] but i came to find out she was the one who told my mother they didn't have the vehicle that was there, really put a bad taste in my opinion of this location, otherwise the gal at the desk was very helpful and i did appreciate that part of the rental procedure, i just wish i could remember her name, i did not catch it at the time i was a bit preoccupied being a little upset by my treatment.

Had a low tire light on dash. Site said that tire had been replaced but error had not been reset. And said they could not do anything about it that Uhaul would have to come out and reset.

Vehicle I reserved was not actually available. I wasn't notified of such until after I did the online check in. By then it was way too late to secure the same type of vehicle anywhere else. Vivian was very nice in trying to offer what she could but the manager was unwilling to fully price match what they did have available.

I reserved the truck for a specific time and they called me to bring it back early. Very disrespectful and unprofessional. Also had a bad feeling when it took an extra 40 minutes after our reserved time to even get the key. Disappointed.