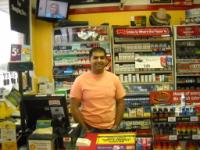 Because I was not told until I got picked up trailer that no help would be provided. I could not pick up a 6x12 foot trailer.

I rented a truck for one day. But due to the fact that I wasn't able to get off work in time, I was a couple hours late getting it back. Because of this, I was charged an extra day's rental and estimated mileage. If I had known that I was going to be charged for thieves, I would have kept it another day and made use of it. My plan was to rent again to complete my moving process, but this time I'll probably be using another company.

Trailer parked in mud!! U-hauls system was down!! I live in Magnolia Ms U Haul was closed agent stated she was out of town in Magnolia Ms U Haul on 24th Ave in MCComb Ms no agent came to door a car parked in front of U Haul ( black car) a person got out of another car got in his car and left!!! Though they had people waiting!!! I called U Haul 3rd time!! They sent me to Brookhaven Ms then I had to p/ u trailer go back to Magnolia get my furniture bring it Jackson Ms then return trailer to Brookhaven Ms same day otherwise I would have been charged for 2 days!!!! Can you explain this mess!! Than uhaul said I would get a 50.00 credit to my account where is it! This ordeal was a total MESS!!

Pick a different location to rent from. This one was most convenient but someone did not do their job. Truck had furniture, garbage, and broken glasses and dishes left in it This was not discovered until I opened the back to load my belongs. U Haul representative was very good to work with.

This is the most unprofessional organization I have ever dealt with. The man that does the rentals was not in the store. He told me to take the trailer and he would finish the computer work at a later time, instead of doing what he was supposed to do he reported the trailer stolen. I finally dealt with a lady at a different store and got it all rectified. I would not recommend this man to sell a candy bar much less a uhaul rental.

This whole rental experience pretty much sucked. Every U-Haul location in the city we picked up the trailer in said they had the size we needed. So we picked the one that was closest to where we were coming from. We were notified that our pick up location was going to be different. I called the place we originally chose and they said they did not have, and have not had, a trailer the size we needed for quite some time. So apparently U-Haul will tell you every location within so many miles also has the equipment you need so you will pick it over something else. At our pick up location we were re-routed to nobody was there for the paperwork or to verify the trailer hook-up. All I was given was a piece of paper (which was not signed by U-Haul representative as it should have been) and told to go hook it up and I was good to go. Then I was told that there were no blankets there that we reserved. Calling U-Haul, I was asked if I really needed the blankets. I would not have left them on the reservation if I didn't need them. Also, sneaky by U-Haul to default the blankets and dolly selected on the on-line reservation making customer to have to remove them or be charged. After a long call to U-Haul, we were able to get blankets from another U-Haul location. We could not alter the drop off location online, multiple U-Haul representatives told us you can change it when you pick up the trailer. We could not because they had no system there to change it. After hooking up the trailer ourselves, no one to verify, we left. Upon putting weight in the trailer we noticed that one of the tires was low, and by low I mean practically flat, so we had to air it up before leaving with our load. We had to call U-Haul to change the drop off location to the one we needed and had to be transferred to the scheduling department. They knew we had a MS drop off location but we got a person in Louisiana who told us he could not help us, we'd need a MS agent so he would transfer us. He transferred us to an agent in New Orleans. Last time I checked New Orleans was still in Louisiana, so they had to transfer us again. Finally got a Mississippi agent to change the drop off location. About the only good experience with this rental was dropping it off. I'll look elsewhere for trailer rental needs in the future.

Put trailer jacks on 6x12 enclosed trailers. It's freaking heavy!!!!!! Why would you not put a jack on it???

While the woman behind the counter at the gas station was lovely and helpful, the person actually responsible for the uhaul only talked to us on the phone. The truck was covered in snow and ice, and we had to clean it off ourselves. Even though we had reserved 12 moving blankets, we were only given 6 and those were unfolded and dirty. This was a really disappointing experience.

Could not get in touch with person to rent truck. Supposed to pick up truck at 8:00 left there at 9:00. Truck was not clean, windshield wipers need to be replaced.

Inside the cargo area had kitty litter all over the floor. Had to wait for 15 min for the clerk to get to the store

The truck was dirty inside and out. I was also upset that I had to go so far out of town to pick up the truck. Plus the truck I did get was not the size I wanted and I had to pay more. I just moved last month and I would think I could have gotten a discount for using another Uhaul truck so soon. But that is not controlled by the people where I picked up the truck.

This is the second time this year I have returned a uhaul to this location. The first time I had to wait 2 hours for someone to unhook....this time, when I arrived at 10:25 am, I was told it would be evening before someone could unhook. I was told the customer always u hooks at this location, and one time a trailer started rolling downhill and just stopped short of rolling into the highway. Employees told me they were never to touch uhauls. Finally a customer showed up to get fuel, and they asked him to unhook. Be aware....this location is a lawsuit waiting to happen. Never never send me back here for uhaul business.

Have the truck ready at thelocation it was reserved for.Had to search all over to find a truck when they had none at our location and had to find our own truck

This location was very inconvenient and difficult to locate via GPS. I ended up exceeding the mileage alotted because I could not find it and had to add fuel all as a result of poor directions! I will not rent another Uhaul again.

Used this location twice. Easy to deal with.

No one there to unhook trailer. I was told I could wait two hours or I could go outside and ask some men putting gas in their vehicles, if they could do it. I was then asked if I could call a friend to come do it......i ended up calling customer service and was told I would have to wait at least another hour (I had been there around 45 minutes....finally a man showed up and he said he would unhook. He said there was no way I could do it as the tongue has to be lifted by hand, off the ball........needless to say, after driving 570 miles the day before, then spending 4 hours unloading the trailer, driving 18 miles to return it, and being told I would have to wait 2 hours to unhook, I was not a happy customer.....and I should not have been told it was not a real uhaul location, that it was "only" a drop off location. As far as I was concern, it was UHAUL!

Drop off of truck was trouble-free and the staff was helpful and polite.

I will NEVER EVER use U-HAUL again. After not being able to pick up a truck at the location I requested in Summit, MS, I was kept on the phone for 41 minutes and six seconds with a U-HAUL representative who initially ASSURED me that he COULD get me truck in Summit via a manual form. After I was transferred to a THIRD representative (after I had given out my driver's license and SSN, and basically everything only my mother knows about me), she informed me that I WOULD NOT be able to rent a truck in Summit, and I would either have to go to Brookhaven or McComb, but if I chose McComb, I would have LESS THAN 10 minutes BECAUSE THEY HAD KEPT ME ON THE PHONE FOR OVER FORTY MINUTES!!! AND ON MY MAD DASH TO GET TO MCCOMB, I CALLED THE BUSINESS FOR TEN STRAIGHT MINUTES TO INFORM THEM I WAS ON MY WAY AND NO ONE ANSWERED THE PHONE!!! When I got there, AND THEY WERE CLOSED, I called U-HAUL again and the representative told me to go back to SUMMIT and I could get a truck there. He PROMISED me that I would be able to do so. AND GUESS WHAT. When I had to call U-HAUL again at the Summit location, they told me that the attendant at the Summit gas station had hung up on them, and I would need to go to Brookhaven. This trip was planned and necessary to pick up my grandmother's belongings in Summit, MS, and because of U-HAUL, I was not able to gather everything I needed to have closure with the house I practically grew up in. It has taken me a month to be able gather my thoughts and not become emotional about U-HAUL's blatant incompetence and failure to live up to any reasonable standard of customer service. NEVER EVER AGAIN.

There was only one person at the store, it was a truck stop. The person helping frequently left me to assist gas and fuel customers. It took longer than previous rentals to complete the transaction. However, she was nice and helpful between interruptions.

Sweep out the back

I returned the Uhaul on Saturday July 5 and it was not due until Sunday July 6. Some how the uhaul didn't get checked in until Tuesday July 7 and I got charged for 2 extra days. I would like a refund for those two days.