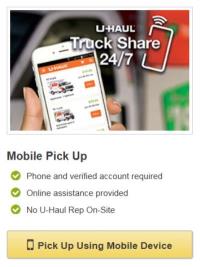 I was denied 2 times to get me identified by Uhaul agents saying that my â€œdriver's licenseâ€ was not a driver license when it clearly says â€œdriver's licenseâ€ on top of the license card. As a result, I stood by the Uhaul cargo van for more than 30 minutes. After I called customer service (nobody called to verify me), someone there helped, so I was able to get identified. Then, I went to pick up the key. And there was no key in the box. The Uhaul person at the location did not put the key in the box. He then went to grab the key and put it back in the box in front of me which I had to take out of the box again. It was my first time trying Uhaul and it was a total disappoint. I was so rushed since I booked elevator for moving only for few hours. It was just such a bad experience.

Thanks for your service! I will use it again!

Do a better job of tracking your vehicle conditions so people don't get charged hidden cleaning fees when it wasn't their fault. Last time I will use U-Haul

They ripped me off that location owner really overcharge

Avoid at all cost.

The owner of the store claims he checked the vehicle for cleanliness but he did not. There was a face mask and paper towels in the cab and the cargo area had some sand on the floor. I didn't think this was a major issue since it was a work van so I declared that it was clean. When I got back, he called to say I had to come clean the van or be charged extra. I told him the van was like that when I picked it up and I had only moved some boxes from a clean storage unit. He said that was" B.S." I asked why there was litter in the cab if he had checked it like he said and he said he doesn't check the cab, that doesn't matter, just the back. I swept out the sand (his job!) and left, he was extremely rude, I don't think if I was a man he would have behaved that way. I also had been charged for a dolly that he "forgot" to put in the van I would never pick up at this location again!

The mobile app did work well . Kept repeating its steos. Took picture but didnt prompt me to next step. Still needed actual person to check me in. Mobile app made the pick up 20 mins late. The person was very kind and helpful man.

This gentleman is great. Getting truck again.

I reserved a van at this location for 6pm, I went to the location and was told they don't have the van that I reserved, I called uhaul and was incorrectly transferred back and forth to various departments. This includes being transferred to a storage location in the states that was angry I called them because allegedly the uhaul support team is not knowledgeable enough to transfer a customer to to right person. After this huge waste of time the clerk said he could reserve a car in a different city. I had no other option so I took it. I had no car so I spent even more time and money getting to thIs location. It was so late I had to move the next day and disrupt my work schedule. Dealing with uhaul recently has been a nightmare, I'll be sure to look into other services with more respect for their customers and I will be sharing this experience with a wide audience to avoid more situations like this in the future.

This was a very conveniently located rental site. Customer service was very efficient and van was clean and well maintained. All good value for money. No problems and would use again thanks.

A last minute reservation change to this location led to my warranty no longer being on the reservation which led to preying on the inexperienced. The man did no walk around before and upon return immediately pointed out a thin line on the roof of the truck that he had never seen before, although it was the first place he checked. Nothing was loaded on the roof and we only drove on highways so no scratch could have occurred from overhang or brush. After noticing how much this sounds like a scam I looked up reviews for this neighborhood dealer and found that this exact thing happens with pretty much everyone that this guy interacts with and the word scam and scammer have been strewn across the Google Reviews on the location. He charged my credit card before explaining what happened to make sure that I couldn't dispute anything before the transaction had gone through. My bad for trusting an established company. I don't think I will do that again and I don't think I'd ever use this company again since they allow this. Half of my move was completed with this trip but I know the next half will be done with Budget.

The dealership claim me damage the van even they do an inspection before and after the rental progress. How ridiculous it Is!! The van just park in road side and no one or any surveillacne system watch it. It could be anyone but me to damage the van. Beside there is a women who serve me when I rent the van and return it back to the store, but it end up a man who said I damage the van. I didn't see that guy at all and he is not there when I return the van and having an inspection at the end. I will take my legal action to protect my reputation and I won't suffer these ridiculous happen!

I didn't realize until after returning the truck that the kilometer rate is $0.30 higher than other Uhaul dealers. Is that normal or was I overcharged?

Provide location of vehicle prior to pick up as it was 6 blocks from pick up spot and after speaking to 4 customer service representatives, I had to drive in a grid pattern through the area to try and find. The whole experience took an hour to actually get my vehicle. Then when went to return the website failed repeated when trying to pay.

I will be contacting management tomorrow regarding this poor experience, I actually may never use U-Haul again, keep in mind I have used it a few times, but this time was

The owner and his way of handling customer service is the downfall of this locataion. Long story short, I was doubled charged for an item and was never refunded, the owner referred me to UHaul customer service instead of taking care of it himself. Guess what, UHaul doesn't even answer my call, what a scam. Don't bother with this guy, he should have consequences for not providing good customer service.

Rented Van with empty windshield liquid tank. So windshield was dirty from the beginning and no way to clean it. Bad service.

Worst rental experience in my life. First of all the truck is park is parked over 2 blocks away from rental store. I went to walked to view the truck he was going to rent to me and it was filthy. I returned and asked him if he had a cleaner truck so he said ok and rented me me a different one that was clean on the outside but had previous renters receipts and misc. garbage inside. He apologized and said that truck had just returned from another province and that he never got the chance to clean it yet. I took the different truck as I had to transport a brand new doghouse. The truck barely had any fuel in it. I dropped the truck off in front of the store later that evening and put the keys in the box. I get the contacted emailed to me the next day with a cleaning fee. I called and expressed my disappointment and asked that he remove the fee. He refused and sent me a picture of dirt in the truck. Very dishonest person. The dirt was not mine. The only thing a left in the truck was a 4 foot piece of clean twine that I thought the next renter could use. I will be filing a complaint with uhaul against this horrible experience with this location. Charged me a cleaning fee when I returned the truck in the same manner as it was given to me.