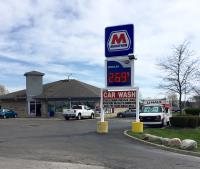 Dont make people pay for gas when they already filled the gas tank up.

I went to pick up my truck and did the cell phone check in . i sent pics of my drivers license and a selfie as requested by the step by step instructions. I was under the impression that by doing the cell phone check in this would be a no contact pick up , this was not the case. I had to go into a gas station and had to stand in line for at least 5 min before the extremely rude employee was ready to assist me . i showed him the phone screen of my rental verification and nicely asked for the key to the truck. He told me to wait and then he continued assisting customers . Finally he came out from behind the counter and went to the office to retrieve the keys . He then went back behind the counter and turned on a laptop , leaving me standing there waiting for keys while he returned to take care of more customers . when he returned to me he asked me for my ID. I explained to him i had already verified my ID and was approved and once again I showed him my phone verification. The employee was rude and said he had to verify my ID. This completely made no sense to me why I had wasted my time doing the fast no contact truck check in . I informed the employee that I would be calling UHaul he turned to me and said he did not care. Then walked away from me to help a woman with lottery . I have used Uhaul in the past and was treated better then this. My so called fast no contact experience was an epic failure and i will never do this again. I would recommend that this pickup place be moved to a location where customer service comes first .

We reserved the Uhaul for a 3:00pm pick up and I even confirmed it the day before. When my sister got there to pick it up they said the keys were not there. They said they would be there in 20 minutes. After a 20 minute wait they said the keys were an hour away. I called Uhaul and told them something needs to happen. After another 20 minutes they found the keys in the lock box. Additionally, they made my sister pay for insurance when I said I did not want it in my online application. This experience was totally unacceptable and they did not offer any discount or anything. Never going with Uhaul again.

This is a busy location.. I had to watch like 50 customers go ahead of me as he processed my order. Then I only went 9 miles. The gas tank did not more. Yet be made me put like 2 dollars in the tank. But it was not a bad experience just could have been better.

Not sure I really like the after hours check in. But I suppose itâ€™s a good thing to have.

Truck was dirty inside, store owner didnâ€™t seem to know what he was doing.

The man that was in the store was helpful and did a good job, but he was by himself to run the cash regester, talk to a person who was ordering products for the store and had to walk around with a fire department inspector so even though i was first in line it took a long time for him to check in the truck, they need more help in the gas station.

improve on the customer service skills

Changed my pick up location without notifying me. Lost all my online reservation information (credit card etc) and made me give the information over the phone.

The gentleman who was operating the pickup process didn't seem very knowledgeable about how to use the uhaul website. Luckily I had checked in online the night before which helped the process go quicker. I ordered 6 furniture pads which were not in the truck so I had to go to another location to get those. Also he didn't know which paperwork needed to be completed because when I went to the second location the guy there noticed the papers still attached the keys. He was at bandit choppers in pickerington and was very helpful. I wish I could have just picked up the rental there like I initially chose online when reserving.

Properly train employees to do their jobs correctly.....I recently purchased or rented a cargo van that previously had damage instead of having a inspection sheet so I can mark and return it before leaving I never received. Thinking that the renter already knew about the damages when I return in less than 30min less than 4 miles I told the employee that it was damage and he told me that it wasn't there before. Talking to higher rank official he stated that it was damage there before but not to the bumper which I knew I had nothing to do with it at all but fell as if I was setup to be responsible for something I didn't do

No one in the store knows what they're doing. Twice they tried to give me keys to uhaul's in two other peoples' names. Very rude service. Never ever would I go back. Will not ever choose uhaul again.

I was unable to pick up truck at first location failure to comply with reservation. Spoke with two people who assured me truck would be there had to go some where else which put me behind schedule by 3 hours. Hours were wrong online and I wasn't told.