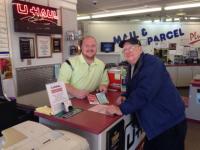 Have all employees properly trained in how to rent vehicles.

I have done several U-Haul rentals over the past few years (and I have used other companies for rentals too) - this was by far the easiest rental we have ever done! The person that assisted us with our pick up was excellent! We will use this location again!

Truck was great. No equipment issues. Virtual pick-up and virtual return experience was horrendous. It took 30 minutes, 5 attempts, and 2 phone calls to complete the rental pick-up. For return, we couldn't manipulate the lock to secure the cargo door (where we leave the keys). It would have been easier and nicer to work with a customer rep in person, but the store was closed even though we picked up and returned during normal store hours (Sat 3pm pickup & Sun 12pm return). I hope to never have to use this version of the rental app again.

The truck should not have been rented in the condition it was in. The rear was dirty. The ramp fell out on the first pull. The roof leaked overnight during the rain, causing interior items to get wet. The truck was rough starting every time. overall, the truck was, in my opinion, at the end of its usable life for Uhaul.

Computers were very slow and took a long time to get order placed. The Guys were doing the best they could

our UHaul was very muddy inside. Enough so that we had to clean it out before we loaded in our furniture. Also had to wait at the pick up location for 45 minutes because the opening manager was late to work. We also wanted an appliance dolly and it was not loaded into the truck. Very poor experience.

Nothing there won't be a next time or a recommendation either

Staff was great at both locations.

Dropped truck after working hours hence no rating for drop off. I just have to guess.... lol

I was quoted $42.85 for going 10 miles. I returned the uhaul after refueling it and had went 15 miles. I was charged an extra $70 some odd dollars. I will not be using your services again, nor would I recommend anybody doing so.

Unhappy I couldn't get the 26 truck which 2 was there had to get a 15 had to make two trips from Champaign to Chicago VERY UNHAPPY SPENT WAYYYY TO MUCH ON GAS....Need SOMETHING REFUNDED OR SEND A CHECK FOR INCONVENIENCING MY WHOLE TWO DAYS OF MOVING.

The system was down so they could not check in my rental. When I asked for a receipt of any sort, they refused and insisted that I trust them.

I was told I may need to drive about 2 hours to get a truck. Thankfully that didn't happen but caused a lot of stress. I needed to wait while the cargo area was swept out. The gas was only half full so I needed to fill up before loading. Also not knowing how much gas my 500+ mile drive would consume, the truck was returned with 3/4's of a tank of gas which was an unnecessary additional cost to me. Customers should return trucks full.

Keep hiring the sort of top-notch staff I worked with at this location. It couldn't have been any easier. The staff was very helpful, friendly, and competent. I will recommend this location to anyone I know for their moving needs.

Although the employee who helped me was very helpful, the experience was not great. I was to rent the truck at 7am. The person who had the truck before did not return it on time and no one let me know. I wasn't able to pick up the truck until 10:00am. Also, the entire move I drove 6 miles and replaced the gas. The next day I discover that not only have I been charged for the truck I couldn't get on time, but I was also charged for 8 gallons of gas! So, I used a truck for 6 hours, drove only 6 miles, and I was charged almost $100. Not acceptable at all.

Get rid of the new online check in system. I have rented numerous trucks from you guys and always just dropped them and the keys. I had issues with putting the keys in the box after locking the truck and not being able to get back in to take your odometer picture which is a requirement to complete the process of proving you dropped it when you did. That was after having left and needing to drive all the way back for the geotag. I never had a hold on the $20 fee thats usually returned at this point, so it didn't apply THIS time, but I find the new system extremely self serving for the company. It only adds more inconvenience for the customer and gives the company an opportunity for further upcharges. I ended up sitting on hold at the facility with your customer service department to see what my next step should be. Thankfully the people I dealt with were more than accommodating. You should stick with one on one. That's where uhaul excels.

This location was great. Employees were great to work with. Thank you.

Everything went smoothly. Customer service was excellent. Thanks for a job well done!!

Great service and had availability at the last minute

Per mile rates are very high, would like to see different pricing options

I set a reservation to pick uhaul up at 6 pm. I recieved a phone call around 4 pm asking me to come in earlier because the store closes at 6 so I did but made sure to touch base on having the truck h til 6 pm the following day. On the following day I recieved a call around 4 pm again saying I was supposed to have dropped the truck off by 3 pm. The guy working was a complete ass and beyond disrespectful towards me even though I told him the situation and offered to show him my email for my reservation. I will never use uhaul again, i did the caller a favor and came back before 6 because I had finished luckily, yet he proceeded to be the persona of an unpleasant and unprofessional person.

The employees of this location were terrific and I highly recommend them. When we went to check our truck in after hours the phone system check in didn't work and I was on hold for more than 30 minutes trying to reach a person on your 24/7 phone line. We also had a malfunction with the truck and roadside assistance left us on hold for another 30 minutes. We never reached anyone to talk to after hours. The folks at the location were terrific about making it right the next day but I received no assistance from Uhaul after hours.

I would prefer to take my business elsewhere and as such would not recommend Uhaul overall, the location has nothing to do with it. I'm not pleased with the policy changes that have been made regarding fueling and multiple references.