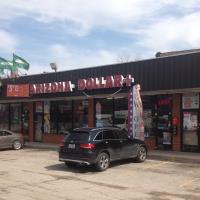 Mirror on the van was broken;

The UHaul website is completely confusing. It took 25 minutes to finish the pickup process electronically. There was 2 women picking up their truck when I was doing the same. They told me it took them 45 minutes.

Do not over charge the customer

The clerk was rude overall First of all he did not accept my driving license. Second, he did not use full sentences at all. Everytime, I had to ask him what do you mean and he became mad. We exchanged heated moments. truck was somewhat dirty. I asked if it was disinfected and he replied (What do you think) When asking me for a 2nd contact info, he said: (What is your contact info) I kept giving my information because this is what I understood. Then he made him self clear that he needs a SECOND contact info (friend or relative) BAD experience with the clerk. I lover UHAUL tho

-The individual at the counter was on the phone the entire time I was trying to check in. I was second priority to whomever she was talking to. On speaker phone, so it was not a private conversation. -I prechecked in, but the process still took 10-15 min. Maybe because she was on the phone. -The parking lot was difficult to get out of and back into. It shares the lot with other stores in a strip mall, so it's very busy. -I wasn't told ahead of time that I needed to refill the tank. Again, probably because she wasn't paying much attention to me when I checked in. Luckily, I didn't drive too far, so the fee was probably less than I would have paid for gas. -The only reason it gets 2 stars is because of the proximity to where I live. It's convenient. That's it.

I ordered a dolly but the truck did not have one . The online process was easy and drop off was also easy

Cust avent was extremely unprofessional and was trying to charge me an updated rated. I called him out on it a..the was quoted .99 per mile he was trying to charge me 1.49 per mile..I called him out on it..then he said if i knew that why would I ask him?? I asked him for facts and not to be rude. I would not recommend this place at all..extremely rude and unprofessional..scammer

Can someone from customer service please reach out me. I had a terrible experience with UHaul two weeks ago. I arrived at the pick up location to get my truck via the online pick up. My pick up was supposed to be for 8:30 AM. I arrived and upon arriving the app said that my pick up was marked for hand pick up by the location even though I set up an online pick up. The app said To wait for the location to open at 9 AM. I waited until 9 AM and no one showed up at the location. I called customer service for U-Haul starting at 8:45 AM. I did not get through to anyone on customer service for nearly an hour meanwhile no one showed up to open the store. When I finally did get through to customer service they told me the store wouldn't open until 10 even though your own website said it would open at nine. All of this is irrelevant though because I was supposed to be able to pick up my truck using the dropbox and the website. Someone finally came from the shop at 10 AM. When they came they just kept talking about how it's not their fault and that the truck I am renting came back at midnight the night before so they could not put the key in the dropbox. No offense, but then why did they let me set up online pick up in the first place? And why was I allowed to reserve the truck for 8:30 AM if no one was going to come and put the key in the dropbox for me? I did not leave with the truck until 10:30 AM two hours after I was supposed to have left and after I arrived. I still was told I needed to return the truck at the same return time. This meant that I got two less hours with the truck, I missed my elevator appointment for the apartment I was moving out with, and instead of being able to use the elevator to move things up in my new apartment I had to dump everything in the loading dock so I can get the truck back on time. Yet I still pay the same amount For my reservation. Uhauls negligence made my moving day a nightmare. I would like someone to please follow up with me about this to see if we can adjust my rate for the shortened time I had the truck and I'd like someone to follow up with the location I rented from to make sure this doesn't happen to anyone else. I won't be using Uhaul again. Thank you.

I made a reservation with no insurance policy and was charged for an insurance policy when I made my final payment. The lady wasn't wearing a mask and I didn't feel like arguing with her but I would appreciate a refund of my 25 dollars if possible

Do not rent UHauls starting at 9 AM because the business does not open until 10. I was not able to use my UHaul starting at the time I paid for it.

The location was closed when I arrived. The guy eventually arrived 20 minutes late after I called him on his phone.

Terminate this location! I showed up at the reservation time, but the store was closed and they did not answer the phone. I waited for an hour, but no one showed up. I then went home. They had the nerve to send me a bill for the rental! When I finally spoke with the person, I realized what I was dealing with. Do not rent from this location. Go down the street to Minas which has a responsible owner.

Customer service claim truck was on full and reported it on initial contact however truck was missing 1/4 gas. Didn't complain just brought the truck back over full

The customer service I received wasn't helpful at all and I felt like I couldn't ask any questions and when asked for clarifications about prices they wouldn't give me real responses. I didn't want the coverage fee and said so online and when I told them they didn't provide me any support and said I'd have to call and come back another time. I'm pretty sure they way overcharged me and I'm going to look into getting some refund back.

Only use this location if doing online pick up/drop off. The manager is rude and lazy. They were over an hour late opening up the store. Do not waste your time trying to work with them.

I was tricked into signing a contract that included insurance coverage that I did not ask for. The person there had a condescending and rude when I complained about it. I will never use this location again and even U-Haul if I don't get my money back for which I already made a complaint by phone.

This location was closed during the scheduled pick up time, and wasted about 30 minutes or so of our time having to call customer service to virtually assist with checking in online -even though I had made the reservation for check in â€œover the counterâ€ to avoid technical problems. The place is also not called ADP services, it's a dollar store. We found it by the address on the door.

I like this location its quick in and out done.

If it says arrive 10 minutes before so as not to cut into your time, the process to get the truck should not take more than 10 minutes. I showed up 10 min before, did the things on my phone, then waited a total of a half hour for my â€œrental qualificationsâ€ to be checked and for the guy who ran the store to show up and be able to give me the keys.

The online check in process was obnoxious. So much of that could've been done when I registered, from the indoors and not fighting off rain. I did online check in to avoid the half hour of screwing around having my time wasted in line the last time I did Uhaul. This time, I got screwed out of 20 minutes of my time in the rain â€” where touch screens don't work â€” and cold, and I had to worry about whether a connection would drop on a phone screen I was struggling to keep dry enough. I'm offended at the return questions consistently using the term â€œfamily.â€ How pretentious and non inclusive! You could say â€œcustomer.â€ Then there's the obnoxious concept of â€œdo all this crap when you return it or we can do it for you for a convenience fee.â€ What?!? It used to be that was a non-question. Now you're trying to make us do what your employees do, clearly so you can hire fewer employees and screw customers. In a time when people need work, I find this very bothersome.

The cost was way too expensive. I thought I would only pay 19.95 and had to pay $93 to move a table and three chairs. I will never use U-Haul again.

Updated hours. Location was not open, nor did it have furniture pads available even though I ordered them through the website. Asked to call phone number on sign in window which read Winter Hours. Upon drop off made billing mistake that took several minutes to rectify.

The location was not easy to find. There was no visible signage from the street. The process of checking out the vehicle was not made more efficient by the suggested online check in. And returning the vehicle took even longer.

The person in charge of giving me the key was pretty rude and didn't even understand much and then he faced me a weird look when he ask me if I put gas in the van ??.Plus I was charged double the prize just to move small stuff from my apartment to a small storage witch is like 2 miles away from store to my apartment to storage and back to the store ! This idiot was like wel ima put 5 miles on it ???????