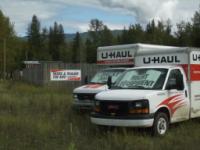 The clerk was knowledgeable and very efficient. Truck was in good condition. Good overall service.

Drop off to a location that is not open needs to be clearer. During the online process (at the beginning) we were told to drop our contract in the drop off box. As I was finishing up the drop off process, my partner dropped the contract in the box only for me to discover that at the end of the process it states to please keep your contract for your records. Can't do both. Yes there needs to be paperwork for the drop off location, although I imagine they could figure out where the trailer came from with either the trailer number or licence plate, but the customer needs a receipt as well.

With a warning regarding their limited hours!

I had booked to pick up my cargo trailer in Kamloops. The day before we were booked to pick it up I received a call saying I had to go to Clearwater to get it instead. Not only did that mean an extra 3 hours of driving (1.5hrs each way), I was charged more to get it from the Clearwater location and it cost us extra in fuel to do it. The unit that was assigned to me was not working, no lights. The location was not even open, even though I was told they were open until 2pm on the Saturday. So we had to track people down & wait for someone to show up. We were not at all happy with our experience. I was told that when you book a pick up location that it is only a preferred location, not guaranteed. Not at all helpful.

Your agent in Clearwater lied to me about the billing. When I was charged a high amount, the agent assured me the reason was that I was paying a deposit. When I dropped off the truck I was told that the total amount I paid was final and there was no deposit paid at all. Don't charge 1900$ and lie that it's high because its a deposit. The same trip only a few months prior, in the same truck was only 390$. I am furious. I was lied to and cheated.

Whatever issues or overwhelming situation this location have (maybe cause it has various business handle by one person), a costumer isn't the cause of that. Someone that is looking to pay for a SERVICE is because is in NEED for it and should get a good one, the one it's been paid for. That establishment is really lucky cause they're the only one in Clearwater, BC. so basically there is not other choice. I hope never had to stop by ever again.

It was clean but the person who used it last transported chemicals and something spilled. Nothing visible but the smell in the unit was bad. Good thing it was small cause I had to hold my breath when I went inside to load and unload. Other than they it was fine.

There was no one at the U-Haul drop off after 9am Sat.

Nothing the girl at the front desk was fantastic!

received the truck with very odd smell and what looked like blood streak inside, took over 1 hour to clean.

love these people they are awesome

I had to drive 125 km to Clearwater to pick up trailer. The one I had rented in Kamloops became unavailable for some reason.

Vech was clean, although it's cleaner than when we picked it up. maintenance for the unit could use new wipers and if and when the windshield gets replaced extra liquid rubber on the contact point's. Referring to a small leak in front of the driver's view. Overall NICE unit easy to drive and maneuver in the big city. It was a pleasure to drive.

I highly recommend taking the vehicle you rent for a test drive before you load up, or leave on the trip, and take it back for another if there are any problems whatsoever. The cube van I rented needed work: when it was first started it made electrical sparking sounds and then when driving it, it randomly shifted down for no reason at highway speed, and would not shift up properly when accelerating, both in town and at highway speeds. As a result, it was over-revving a lot, causing exorbitant fuel consumption, and was hard on the nerves since I was wondering if I was going to make it to my destination. If i had not been an experienced driver, it would have meant a trip to a mechanic during my move, which would have been a serious problem considering my circumstances (with a full truck, a distressed pet, and a very long way to go, to name a few issues), So, I suggest that thorough maintenance be done BEFORE the customary dates required since these vehicles get a lot of use. (Keeping in mind that the businesses that rent the vehicles etc out are not the ones responsible to do the maintenance, which is done by UHaul itself) I also suggest that during this thorough maintenance that each vehicle be taken for a decent length test drive, since some things (like the problem with mine) don't show up unless taken out on the highway. That said, the rest of the experience was good, the businesses where the pick-up, and the drop-offs were done, were friendly, efficient and helpful. On the website, it was quick and easy to book the equipment (except the website said cargo straps were provided (and weren't). On the phone, the personnel were respectful and helpful.

Support for hookup and placing unit in a location easy to pickup....cleanliness of facility was poor, similar to a junk yard

You payment system is very poor , had to go and get cash and put a deposit down that i was sure i would never get back . What do you know I DIDN'T as the unit was damaged when i pick it up and after talking to the BBB they confirmed that i probably wouldn't be getting my deposit back. I won't be using U-Haul again.

Nothings broken no need to fix anything

Just a drop off...didnt rent from them

Was nobody in the office when I arrived to drop trailer off but shop mechanics were very helpful.

It was an excellent experience. My car broke down in a small mountain town, hundreds of miles from home were a mechanic was telling me it will cost thousands of dollars to fix. I got ahold of uhaul and you did whatever you could to make sure that me and my family got home safe with my car in-tow. Thank you Uhaul.

Clearwater station was closed. Also not impressed as I received my receipt and it says $0 on it. Not sure how I can put that on my taxes?

Beyond being over 140 km out of the way, no uhaul trained representative was available upon arrival. Had to contact uhaul to finish the pick up.

Staff advised that the previous customer complained about the tires. This vehicle was very unsafe and got stuck even before leaving the completely flat compound. This vehicle got stuck multiple times during the drive and was sliding all over the roads and highways, unable to maintain a safe highway speed. It was unable to stop at stop signs on slight downhill slopes as the tires slid and, merging on the highway, this vehicle began to slide sideways losing traction narrowly avoiding causing a serious accident. All season tires are bad enough in winter, but Uhaul should at least maintain having tires with some tread left as it was a very unsafe, if not illegal, experience having tires that slick.