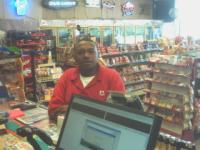 I would never recommend the CITGO IN Como MS!!!! I am going to file a lawsuit against them and UHAUL

The business owner left an hour before our reservation and left an employee in charge who didn't know how to process the reservation. If it wasn't for the 1-800 number, I wouldn't have been able to get what I needed.

The lady behind the counter of the store said she had nothing to do with Uhaul, and asked to step out of the way. I called help line and found out how to drop the truck off on my phone, and got verification it was accepted with no additional charges. I went back into the store to find out where the drop off box was for the u my key. The same lady told me they didn't have one and when I asked what I should do with it. She said she didn't handle it. I left the key on the counter and tried to leave. She followed me out to my friends truck yell something at me and threw the keys at me and they landed in the truck. I called the helpline again and was put on hold until a different department talked to me. Agreement was made that I would put the keys on top of drivers side sun visor and leave the truck unlocked. I returned the truck with a full tank, more than what it had when it got, to the place agreed during its posted operational hours, two days before it was due. At pickup I had to wait even though was on time for the agreed time. Didn't even see a uhaul person on the drop off, and was yelled at and had keys thrown at me. Most people were helpful very reasonable, but the drop off could have gone better.

The receptionist did not seem to be familiar with the procedure to accept the trailer. I was hesitant to even leave it. Then I got a call today basically asking where the trailer was, this is 3 weeks after it was dropped off.

Have a U-Haul rep onsite. Make sure trucks are maintained.

Close this location or retrain employees on the duties Uhaul expects it's employees to perform .

It was a joke the lady didn't want to sign that they received it she told me to put it out back and then you guys started calling me saying that I never dropped it off as still as of this date at 4:30 nobody knows where the trailers is because I can't get a hold nobody at the drop off location. 4/22

Pick up (Fri. 08/10/2018) - No qualified U-haul rep present. I had to call Tupelo, MS while at the Como, MS location to talk to a U-haul rep who released the trailer to me. What should have taken ten minutes to accomplish ended up taking over an hour. When I returned the trailer(Sun. 08/12/2018) there was a U-haul rep at the Como location but, he was argumentative and uncooperative and he still had to call Tupelo so that I could leave the trailer at the Como location. This is a ridiculous way to conduct business with a company that has been around for so long.

Marco were very nice and on top of his job well done ?

The pickup site agent should be instructed to call the dispatcher when they are having issues.

The man helping me had NO idea what he was doing. Paper work did not match the truck. He said it had a full tank of gas and was on empty. This location is a high traffic drug area. I lived 10 miles from the location and would never stop there because it's a thug area. I was also over charged and have not received the money owed me.

It was a bit slow due to one person running the store and uhaul rentals. Customers making ordinary purchases constantly interrupting rental paperwork. But if it keeps cost down, I can tolerate it.

Marco was exceptional in helping me with the rental.

This location should not be allowed to rent UHauls. The people were rude and not helpful. They did not even know how to hook up the trailer or see that it was done properly. I called the location twice prior to the pick up and they were extremely rude. They were more worried about smoking and talking on their cell phone than helping. It was an awful experience in COMO, MS. It was a dirty run down gas station with poor customer service. Disgusting.

Inform the location that they need to CALL the person and let them know they are going to have to drive 40 miles out of the way to get the truck and 40 miles back and not even give you a break when you are renting it!

Dropped the 5x9 trailer off at the location that was nearest to my home the morning after arriving back. No problems, issues or complaints.

It's a gas station, I had to wait several times for the gas station employee to check out other people while he was trying to book my reservation.

Trailer leaked. Uhaul agent said she did not know where we were going to turn in trailer as there are no uhaul locations in Big Spring, TX. I live in Big Spring and knew of two locations? ? Why could she not find them? Also, a man came out & showed us which trailer to get. He asked if we wanted him to help us hook it up because there was no one inside to hook it up. We have rented trailers and trucks pulling a trailer & the uhaul dealer always hooked them up. What gives with this dealer? We are very unhappy with this rental purchase.

I was told at my pick up location where I could drop off in my town. However, at drop off, they were closed. I called the 1 800 and was told I could drop truck off at a nearby town and leave key in drop box. Also, noted on the websites that this drop is 24 hour. However, at the second site, there was no drop box and no one to take the truck. I had to return 5 hours later. At that point, the personnel tried to tell me I needed to pay a late fee, although, I had tried to return the truck on time that morning, and had in fact left it, and returned later with the key when someone was available to take it. Inconvenient.

I used to hike trucks for penske and will admit to seeing alot of uhauls on the road. But mostly an older fleet so I expected to get a rough truck? But it was actually a top of the line one! Drove straight and had plenty of power for merging and staying with the flow of traffic! It was dependable and easy on the pocket. Budget had left me hanging in Tunica Mississippi with a 26' truck after I had reserved a 16' one to take back to Nashville. That large of a truck would not work! Penkse basically asked me to make one of their monthly payments for them, $$$. $$.. I was unaware that uhauls price included insurance on the truck? And it was still much cheaper thatn budget or penske without their insurance coverage! Thank uhaul for being there when I was in a jam!

The assistant wouldn't wait on us until all gas station customers were attended to. We had to drive 18 miles to pick it up. The assitant was unfriendly.

This location is a convenience store and had only one employee present the day of pickup. The single employee was bouncing back and forth between my rental paperwork and walk in customers to the store. It took almost an hour to complete a reserved rental agreement. The one employee was doing all he could to keep up.

no one help me hook up.

Don't Mislead about deposits you don't get deposit back.

Would not take credit cards. Had to pay cash so had to use their ATM. Then had to buy insurance because I couldn't use my credit card. This location was 45 mins from where I reserved the truck. And on and on and on! I will NEVER use Uhaul again.