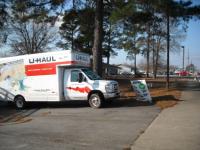 If I'd known that they weren't going to be open on Sunday I would not have rented here. My preferred location is in Sherwood Arkansas and they are always open even weekends and holidays. Won't use Lee's ever again. Thank you

Fast, friendly service. Thanks for making our move possible.

Awesome staff! The lady helped me get my reservation switched over to help get us moved! This let my brother get home at 2 am instead of 6 am on a Monday!!

This was my first time using uhaul and the team members at both locations we're not very explanatory about the way uhaul is done. She just gave me the contact but didn't really explain it .

they were closed at drop off so no opinion on this location, i do have to say i do not like the after hours drop box, i never could get the online part to work right and ended up just putting the keys and paper in the box and leaving.

I was overcharged for gas and was told the amount of gas in the uhaul would be communicated with this location. They still charged me 28.50. I will be in contact with someone for a refund once I find out who.

Efficent. Lady at desk was kind and went out of her way to accommodate. She made experience pleasant and simple. No hidden fees.

The previous customer that rented this truck didn't return it washed nor did they clean the cargo out. I'm sure that this customer was charged a fee. With that being said the owners or employees at this location should have washed and clean it.

REMOVE my email from your database ASAP please and Thank you

Continue to give the same Quality Service that I Received . One Satisfied Customer !! Thanks

I was not informed of one of the fees and was charged for fuel after filling to level it was at upon pickup. I spoke with the location and they won't refund. The truck was also terribly out of alignment. The store was dirty and smelled. I will be renting 4 more trucks and 2 trailers on December 20th. I will now be checking with pensky and most certainly will not be using the same location.

They are so nice and helpful here

Inside was full of leaves so we sweated both before we loaded and after we returned. Just FYI. No big deal.

The lady at this location has been very kind and helpful both times I have rented a truck from them. They are awesome!

I returned the trailer a day early because of mechanical problems and didn't get any money back !!

Women helping hookup was very knowledgeable and helpful hooking up tow dolly. Uhaul is lucky to have her.

poor customer service! Did not give me details on anything!

I should have realized but the lady was so nice and when she asked about insurance and said it was only $28, I failed to realize it was DAILY. My biggest issue though is with the place I returned the Rental. I called when I realized I wasn't going to return as originally planned. And I asked, after giving my name and information how much additional was it going to be to keep truck longer. He said $40 daily. My exact response was like that's it? And he said yes. And I asked if it was going to be an issue and he said no. However when I returned the truck, it was $40 additional PLUS $28 DAILY !! I would have made other arrangements, had this been disclosed to me. I pointed this out upon returning the rental only to be rudely informed that when I called they can't see if I have insurance or not. I specifically asked, that's it? And was told yes, after giving my name and verifying what truck I had, I find it hard to believe that they could not tell if I had insurance or not. If this is true, then that needs to be changed. It's not like it's just an additional $2-$3 dollars. That fee added up to be $140!! Just the insurance. I'm sure with my excellent driving record, State Farm would have covered me an entire month for less. I have recently been declared disabled and moved due to that. I am on a very fixed income and was lucky my card even went through to cover expenses. What would have happened had I not had the funds available, bc someone who represented UHaul straight up lied to me? Hiring professional movers would have cost me less money. I have always been a do it yourself kind of person and have always used Uhaul. Even when purchasing storage units at auction, my go to is Uhaul. Or was. I can not express my extreme disappointment in the service I received or lack there of. I feel totally taken advantage of...

Rates are very high for what you get. Almost $40 to rent a trailer for a few hours and no help with returning it or an extra charge. Plus had to drive extra miles to take it back to location or pay extra.

The market light was out and got pulled over while transporting twice. Luckily no ticket was issued. Lights was checked before the trailer left. Either it wa out before hand and wasnt noticed. Or went or while in use. Either way should you call road side assistance at this point or does that cover them coming to fix that problem.

No one was there and not hardly any drop off room

She told me I had to extra day because no one there for drop off then when I got there she told me to drop it off at heltons she left her jack at home so I had to travel across town to get there they told me I could of dropped it off and only buy one day. I am very disappointed In this whole situation. No I won't be recamending uhaul at all.. ...