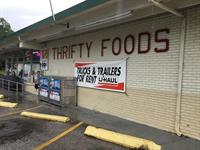 Im charged an extra 45 miles! (I GPSed my trip and made no extra stops or turns. Im charged extra gas but I filled it 1/2 way up! I left it at the same I received it.

When I pick the truck up in Crestview there was sand all over the floorboard in the cab of the truck. The outside was OK but the inside was just nothing but sand.

I was over charged for my equipment. The location is in the middle of a drug infested area. I had to go out a locate my truck and trailer.

Trailer was really good to help me move my riding mower. I've used U-Haul before and a lot of different equipment they offer. Always happy with the condition of equipment and the prices. Always a good choice going with U-Haul!

Would have given a better rating if personnel were wearing face masks/face shield.

I made a reservation, but the business owner is a one man show; he was 20 min late for the appointment. Online, I had declined insurance. The business owner added insurance at my expense without my consent. I didn't know about this additional charge until the bill was processed by my credit card. Another customer came in to complain while I was there. Avoid this location if possible.

I asked for a specific drop off location. Was given a different, less inviting, and further away location.

Thrifty Foods Uhaul location charged me double late fees for a 6x12 trailer they claimed I brought back late even though I brought it back the same day and checked it in with one of their employees. Employee told me the trailer was good to go when I returned it and employee indicated he would notify manager. Manager at Thrifty Foods Uhaul told me other female employee did not know it was returned. Manager told me he would credit my account. Just a bad experience.

The gentleman I was working with, who took my money at Thrifty were I picked up the truck is too good to be working there. He was excellent. I have had a bad experience from Uhaul before in the past in Ohio, this one in Crestview, FL was excellent.

Although the gentleman who assisted me was very nice, I received over $30 in additional fee DESPITE my turning the vehicle in on time and clean, ensuring the gas was the SAME as when I rented the truck, AND asking the renter if I needed to to any further actions when I returned the truck-- he said, "No. You're good." I left and got charged an additional $30 in addition to the additional $20 that I was charged unnecessarily for moving ONE BLOCK DOWN THE ROAD.

Great and friendly associate. They treat you like family at this location and would highly recommend this location!!

I was charged dou le for my rental and it has yet to be resolved.

I scheduled my pickup at the Crestview FL location on hwy 90. When I got there at 10a the location was closed. I called the number on the email and was told to go to the Wilson location, even though my confirmation email gave the date, time, and location for hwy 90. The guy at the Wilson location had problems pulling my info (waited approx 20 mins).

Thrifty Foods did not have any dollies. When I reserved equipment on Wednesday July 8th I reserved a truck for two days an appliance dolly and a utility dolly. Thrifty Foods did not have either of the dollies. I got the truck from Thrifty Foods but had to go to another uhaul dealer in Crestview FL to get the dollies. I returned the dollies to the location where they were obtained and the truck to thrifty Foods on Sunday July 12. You would think when a reservation is made at a location that ALL equipment will be ready and available at the time the customer arrives to pick up the equipment based on the time posted on the reservation Thanks

they didn't check my trailer back in correctly, was sent a late return notice from u-haul had to go back down there to get it fixed the person helping to unhook was helpful owner was helpful on 2nd trip down there

The equipment had some damage that damage my vehicle, and in top of that i return it early and i got and email in a week saying i have not return the equipment, instead of contacting the place they took my time so i have to call and check on their work.

Don't worry about the location seeming a little off the beaten path - maybe it was just the route that my navigation system took me. What really made it was the U-Haul agency folks were exceptionally helpful, ensuring the trailer was correctly fitted and the strapping system clearly explained. 10 out of 10 for being supportive, taking the necessary care and the attention to detail. There are many service suppliers in the USA which could take a leaf out of this book, I can tell you. Very pleasant and a benchmark example for everyone in true customer service. I would also like to single out Mike at Mike's U-Haul on Fondren Road in Houston. The guy could not have done more to help me even though I was not renting direct from him. He bothered to arrange the rental, suggesting the best way to use the service which helped me figure out the optimum solution for me to complete the task. Just when I needed someone disinterested in the problem to resolve the way to resolve it, he nailed it for me. Many thanks. Give this guy your U-Haul agency of the month, please and teach all the other 'money first' businesses in this country how real, person based care and attention should be used to make the USA really 'great' again. It's maybe not too late to stop the rot.

Not my first choice, but was only nearby location open when we could pick up. What a disappointment! I had a truck to turn in and a trailer to pick up. When I reached the counter and gave my information, he asked me to step aside so he could help others behind me, even with other checkout lines open. After he helped several others, I got back to the counter. He took my truck key and documents and gave me a scrap piece of paper with the trailer number on it and told me to just go and hook it up. Unfortunately, the trailer was blocked in by other trailers. I went back inside to ask if I could instead take another like trailer that was not blocked. After I waited in line again to reach the counter, the request was denied and he requested someone to help. Two people eventually showed up to free up the trailer. After some amount of maneuvering, banging the trailers on either side, and running over the tongue on another, they freed the trailer and attached it to my hitch. The attendant carefully secured the safety chains and electrical connection to the trailer tongue but NOT to my vehicle and said "There you go"! Really?? I connected the safety chains and electrical connection and departed. Some of the worst customer service I have experienced.

Where do I start? I called ahead to verify hours and the guy was very unprofessional, hard to understand in addition to lots of background noise. I arrived and waited behind one person and proceeded to the counter and provided the key and paperwork. He started to process the turn in, but suddenly told me he was going to help the people behind me! Really??!! There were other checkout lines open in the store for others to use. After he helped 3 or 4 others, I eventually got back to the counter. He did not check the truck at all. At the same time, I rented a small trailer. I made the payment and he wrote down the trailer number on a scrap of paper and told me to just go get it! When I found the trailer (in the dirt and grass lot-thankfully it wasn't raining) it was blocked by other trailers. I waited behind 5 people to get back to the counter and asked if I could take a different trailer that was in the open. That request was denied, told I had to take that particular trailer, and I again had to wait for someone to help. Eventually, 2 people came out and pulled it free, banging the trailers on either side and running over the tongue of one. They attached it to my car, but secured both the electrical connection and safety chains to the trailer tongue and NOT TO MY CAR! He then said, â€œThere you goâ€ and left! I was dumbfounded! I hooked everything up correctly and had my Grandson verify the lights worked. Additionally, I received NO paperwork. Some of the worst customer service I have ever experienced.

This is a somewhat new location for U-haul rentals. The person I worked with was very helpful. However, I was disappointed that there were no furniture pads. The owner said he was not given any with the rentals. Also had I put in my reservation in earlier with a competitor it would have only cost me .59 cents a mile instead of your .99c a mile. I will definitely look to your competitor if in the future I need another rental.