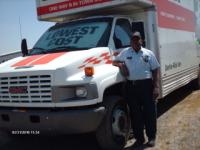 I first I felt angry becauseI had completed an on line reservation with all the options I needed. But, in retrospect, As the contract was being processed I should have made clear to the pick up dealer the options entered on line for the reservation WAS the options I wanted. While going down the list I was asked if I wanted the "Safe Move Option", Not realizing that "Damage Protection" I had selected on line was same, I said no. I say all that to say: If someone selects desired options on line, make it clear to the pick up location "I ENTERED THE OPTIONS I WANT ON LINE AND DO NOT WANT THEM CHANGED". Additionally inquire if NO COST additional mile are available. They were offered but I declined them because the contract mileage of 184 miles exceeded those from past trips to the same location of 165 miles. I noticed enroute to load the odometer on the 10' truck I rented registered .4 miles farther than my car traveling the same 26 Mile distance: As a result when the truck was turned in the odometer, rather than the 165 miles in my car, accumulated 204 Miles; I ended up being charge for an additional 20 miles (I did sign a contract clearly stating mileage will be base on the truck odometer, so MY foul). In the overall scheme of things the "damage protection" was not needed. Just be clear what YOU WANT and take you on line reservation with to the pick up locations showing the options to avoid my situation. The terms in the ON LINE RESERVATION and those on the Equipment contract aren't necessarily the same: Apparently "Damage Protection" and "Safe Move Option" are U-haul Synonyms.

Inside the cab and van was muddy had to mop the van out.

THIS WAS THE WORST EXPERIENCE OF OUR RENTAL HISTORY. I WAS TOLD THAT UHAUL STAFF ARE REQUIRED TO TAKE ANY RESERVATION THAT COMES IN EVEN IF THEY DO NOT HAVE THE EQUIPMENT. WE RENTED TO PICKUP AT A LOCATION THAT MADE TOO MANY RESERVATIONS AND DID NOT HAVE EQUIPMENT FOR US. I STILL DO NOT HAVE A FINAL INVOICE. WE WILL NEVER RECOMMEND UHAUL, WE WILL TELL EVERYONE WE KNOW TO NEVER EVER EVER EVER USE UHAUL AND WE WILL NEVER EVER EVER USE UHAUL AGAIN. IT IS BY FAR THE WORST COMPANY ON THE PLANET. THE ONLY GOOD THING I CAN SAY IS THAT YOU HAVE A FANTASTIC STAFF PERSON IN STUTTGART ARKANSAS. I TOLD HER THAT WHEN SHE IS TIRED OF WORKING FOR A COMPANY THAT LIES TO THE CUSTOMER SHE CAN MOVE TO ATLANTA AND I WILL PUT HER TO WORK IN MY COMPANY.

Keep doing what you're doing! Thank you! I'll be using U Haul again in a few weeks!

I don't blame the location--which was fine--but I find it absolutely ridiculous that this location was over 2 hours from my requested pick-up site. This added 4 hours to an already 24-hour drive, and I booked the location well in advance. No apology was even offered--the lady at the call center simply said "there ain't no trucks in Mississippi." This goes well beyond customer service to just basic human decency; if there aren't any trucks in the area, drive one down.

Just wish I could have picked up in Stuttgart as requested. I understand that couldn't be helped due to inventory.

It would be nice to have the uhaul we we were 4 days getting it. It delayed every it delayed ever thing we had to do with our move! I will not refer anybody to Uhaul

We were given the same trailer we used last year. Should have checked before we left but found after we were on the road that the passenger side tail light was out completely. It was also out last year. That's dangerous and he was told last year and today. Also, last year I brought the trailer home to load in the morning but a tire was flat within hours.

An alternator shop is not a place that looks clean & inviting, but Jr. was very professional.

The gentleman who hooked the trailer up didn't cross the chains from left-to-right and right-to-left. I think this is an important safety feature and should be stressed to everyone involved. Other than that, great place.

The truck was leaking from inside of cab

I will never rent online again...I did not know that JR did not make anything on this transaction!!!!

There is nothing to change!

The place was very dirty and disorganized. The car tow dollie wiring harness was damaged as well as one tail light and I helped them fix it to save time.

I will do my best to never deal with UHAUL again. The customer service I received from central scheduling and the customer service agents on the phone was appalling. My pick-up location was changed and I was not informed, as a matter of fact, I got a confirmation of the original location that morning at 7. No one apologized for the change or the lack of information regarding it, or the fact that I had to drive 25 miles out of my way to pick up the truck. They were supposed to credit my account for $50 for my "trouble", but that hasn't happened yet either. The only person that was nice to me was the dealer that I picked up the truck from. She was the only person to apologize for my troubles, and it had nothing to do with her. Bill's Sales and Rentals was great.... UHAUL, you have the worst customer service I have ever had the misfortune to have to experience.

I have a few comments. 1. I went on line are reserved a 26ft on Tuesday 10th in Stuttgart AR. I recieved a call on Thursday that they had a truck in White Hall AR about 50 miles away. 2. After calling Uhaul and trying to get a truck closer I had to settle for a 17 ft truck 25 miles away. 3. We went to Dewitt to get the truck and it took almost an hour. It wasn't ready, still had a car tower hooked to it. The blankets I had ordered were not in it and the furniture dolly was not in it. 4. The truck was fine. The gas tank wasn't full but it was marked on the sheet. 5. It was raining when I picked it up and he had marked all the damaged spots on the truck. I should have paid closer attention to this. 6. The 17ft truck ended up not being big enough so I call U-Haul again looking for a 8x12 trailer. They had one in Dewitt but only a 8x5 in Stuttgart. I took the smaller one. 7. This took over an hour to figure out how to not charge me for the trailer. 8. I finally got moved to GA and turned the truck in this morning. My main complaint is I had done the online reservation for a truck that was not available in Stuttgart when I needed it. Then I had to go 50 miles round trip to pick up a truck that was too small. It takes to long for them to fill out the paperwork. I spent 30 mins turning in the truck this morning. We made the trip but it wasn't a plesant experience.