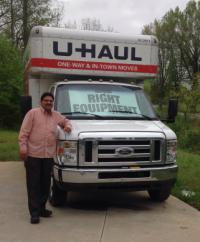 I was robbed of service. The truck broke down numerous times, they mistakenly reposed the truck when they told me the were getting a repair guy, and left me in the middle of town with a trailer in 30 degrees temp, the repo guy broke some of my kids and wife's stuff. Some was irreplaceable, hot the truck back still messed up, promised a full refund and didn't deliver, and refuses to refund and compensate for the damages. Worst experience ever. Made a already stressful situation 10x worse.

The truck was dirty it had a engine light on in the dashboard the towing light was on in the front dash. I was supposed to have hand trucks he said he didn't have any and I only had the one truck so I have no hand rugs when I returned the drug they did not close out the bill and look at the mileage and close it out give me a receipt they said they would do it sometime an email me I don't do business like that

Have your ducks in a row.

The owner initially told me I could not leave the truck because he didn't have space for it, and he didn't. Even though this is where the U-Haul app told me to take the truck. There were several places closer to me. The location is tiny and is a gas station so the danger for an inexperienced truck driver with a 26ft truck is high. As I was refueling the truck, the owner came out and said I could leave it. After much maneuvering, I was able to get the truck parked on the far side of the store. It was nice of the man to let me leave it when he clearly did not have the space for it.

The truck was in need of serious service attention, the AC blew hot on a 93degree summer day and the truck's front suspension was loose/ all over the road, which is a safety concern. The pickup location/dealer was a run down gas station that refused to leave the counter to do a pre-inspection before we took possession of the truck. I'm not impressed with my experience renting a truck from here.

The pick up location was unaware of how to process my rental truck. Waited for over an hour for someone to figure out how to process the rental truck. The location did not have a hand truck that I had already requested in advance. The location had me get on the phone with a someone from U-Haul to finish the rental agreement. Had to drive to another location to pick up the hand truck. Next day we dropped off the truck and hand truck off before our return time with the gas refilled. I was later changed double what I rented the truck for. U-Haul claimed I returned truck late, did not refill gas and went over on miles. I will never use U-Haul again.

I made a reservation (91813653) to pick up a 20" truck at the Clean Air location on Veterans Memorial Blvd in Cumming, GA for June 28. I was told it was confirmed. On June 27 I received an e-mail that my reservation had been changed to Dawsonville, GA. I called the Clean Air location and was assured that I had a reservation at that location. I was told that I had another reservation and that they would cancel the one for Dawsonville.When I arrived to pick up the truck on June 28, I was informed that my reservation had been cancelled and that my reservation was in Dawsonville, I had to travel 10 extra miles to pick up the truck in addition to the extra hour it took because of traffic. I had declined insurance, but when I returned the truck on Saturday, insurance had been added to my invoice online. I was charged an extra $50 including the added mileage and insurance not to mention the time and personal gas expense in picking up and returning the truck. This is not acceptable, especially when there is so much stress in moving. The least that U haul can do is to refund $50 that I should not have to pay.

Silver City Citgo included insurance without asking me. Then they couldn't back it out of my contract. They called UHaul and said District Manager would take off the $28.00 charge. It never got taken off. Very disappointing.

We were first sent to the wrong location for pick-up then re-routed to Silver City Citgo. Due to the re-routing and paperwork not being ready, it costs us an additional hour of time. The lady we first spoke with seemed untrained to do paperwork efficiently. She contacted a gentleman (assuming the owner) who we had to converse with over the phone was extremely abrupt and rude. Would definitely NEVER recommend this location again.

First of all my reservations I made changed!! From a nice place good reviews to a place I will never step a foot in again!!! There was crack pipes and porn in plain view and I had kids with me! The person there didn't know what she was doing and had to call someone else for every question I had! I did not get all the things I reserved! Blanked was nasty! And on the floor covered up by garbage and nasty shelves from the store! I will never choose to rent uhaul again because of the pick up location!!!!! I didn't check but the tank was empty but paper work said full so I just filled it on up to not cause more problems!!!!!

Didn't speak English. Wasn't a smooth transaction and odometer showed at check out 46388, and contract showed 46196 I was charged $68 for extra 141 miles I took pictures before I left due to knowing I was inaccurate and attendant acted like she had no idea as she spoke threw someone else on the phone to me I called the ya road assistance person told her and she said to note it. I called today made a complaint cause I was charged and told the man I could send pic and he told me I wouldn't be charged but I just checked email and I was so here we are working on it again. So if anyone reads this please look into it and feel free to call me at+17063447848

Service was great but I think I picked up a truck that was just returned. Was empty on gas and needed to be swept out in the back. Other than that, all was good.

The staff was not knowledgeable on the rental of trailers vs trucks. She was unable to give me a quote for the TRAILER Rental without the millage??? When I arrived to pick up the trailer the computer was down and she called someone on the phone that completed the retal info. I had filled out the rental info on line. I was not given a copy of the rental agreement. I was given a paper bage with the trailer number on it. When I returned the trailer the man/owner printed the receipt that showed an $8.00 Safe Tow fee which I would not have asked for. He told me that I would have to call U-Haul to get the refund. I tried with the number he gave me and had no success. I looked up the number online and was able to get through to customer care. Dee assisted me, applied for the refund and was very helpful.

I booked online and it had me go to Byrd's storage and U-Haul. When I got there they didn't have it and had to reassign to a smaller trailer at this U-Haul location. This isn't Silver City's fault but you didn't give me a chance to rate the ordering process.

This location is very ill prepared. The truck was not cleaned still have the blankets and appliance dolly from the previous rental and it was not cleaned out. The attendant couple not fill out the contract on her own without being on the phone to get help. The attendant did not understand English well so he had to be on the phone getting her husband on to interpret for her.. Did not have help to hook up travel trailer and the running lights did not work at all. I will never rent from this place again. I began renting from a different location and when I went to that location to pick up the Truck, Car hauler, Blankets, and Appliance Dolly they did not have the reservation. It was sent somewhere else and I was never notified of it. Not good.

Move the drop off location!!! The attendant behind the counter did not speak English hardly at all, couldn't understand her, she did not look over the truck and check my mileage or the amount of gas that was needed to be in it on the return. She took my paperwork and told me don't worry about it and that she didn't need to go and look over the rental. Extremely disappointed with the drop off location

Worst uhaul rental experience that I have ever had. Woman who checked trailer out was incompetent, took an hour to finish paper work after pre-rental was done. Man whom I returned the trailer to was extremely unhelpful and verbally abusive to me. Avoid this location. The gas station has a huge case of drug paraphernalia for sale.

We checked out online prior to arriving to save time. These efforts were fruitless evidently. Once we arrived at this creepy feeling gas station we were forced to stand and wait for over half an hour and were told little information about why we were having to wait. Finally we were handed the keys to our rental truck. We weren't given any kind of paperwork or told anything about the terms. We walked out to the truck and discovered that an essential piece of rental equipment (an appliance dolly) we had already paid to rent was not in the truck. Already behind our moving schedule due to the unnecessary wait time, I then had to make a separate trip to Home Depot to rent a dolly from them at a more expensive price. To top everything off, we were not given enough mileage in our rental agreement to even cover getting from the location we were moving from to our new home. Our last move with U-Haul was alright, but not good enough to compensate for this terrible experience. We will not be renting from them again.

First location did not have my truck and then I was sent to this location due to customer not returning vehicle. The computer system didn't work at this site and I am just glad that I actually got the truck I had ordered and had advance completed the information.

U-Hall online order allowed me to order an appliance dolly from a location that didn't have one in stock. Gas station personnel were unable to override the KO code in my online order, to at least complete the truck rental. Had to drive to alternate locations in order to obtain an appliance dolly.

Train their employees to handle a U-Haul transaction. And if they don't know the answer, look for a way to get the info and take care of the customer.