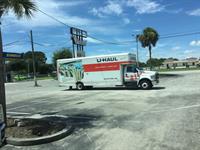 multiple pickup locations before final spot. didn't have the equipment i asked for. ultimately went to a return center to get pads i needed

Had a horrible experience with Uhaul. It cost me time and money above and beyond what would have reasonably been required for such a transaction. I will not likely use Uhaul for future moving needs. Improvements needed: - maintenance of rental supplies - a reasonable amount of communication from all Uhaul reps. - a percentage refund when Uhaul reps are the responsible party for causing additional time and money to the customer.

We picked up the uhaul from a gas station there were several homeless people near the vehicle, we inspected the exterior which looked acceptable, upon opening the back of the truck for the move, the vehicle emitted the strong smell of body odor and urine, the moving blankets were wet beside a folded urine soaked sign from the gas station, it was apparent someone had been living in the vehicle, I tried to call both uhaul and the store with no answer, knowing it would be difficult to obtain another truck on short notice as well as it being my only day off I resorted to mopping the truck and laying down my own sheets, this did not resolve the odor, uhaul has yet to contact me regarding my complaint, this experience was absolutely unacceptable and disgusting, no truck should have ever been released in that condition

Change online pickup hours. I reserved pickup on 5PM on a Sunday. I received a call around 11AM that day stating they closed at 2:30 PM. I rescheduled the pickup for the following morning. I was there almost an hour because there was only 1 cashier and they were helping other customers in addition to me. It was a headache trying to return the truck because again there was only 1 cashier and they weren't familiar with the system. The truck was returned on Tuesday 8/1 but it looks like the ticket was just closed today. As a result I doubt I'll be renting from U-Haul in the future.

The personnel was as helpful as possible considering he was not the one who handled the process therefore I did not feel comfortable leaving the truck. Also this was not the closest location to my destination.

No U-Haul signs, no other U-Haul truck in their parking lot.

Owner didn't open the store until 8:30 when I was scheduled to pick up for 8. He also charged me for a dolly that I didn't receive! It took him about a half hour before I even got the keys to the truck. Worst experience ever!

They didn't have regular truck size I called about. Overcharged me for truck and 99 cent a mile! Ridiculous! Never again

While the convenience of a neighborhood Uhaul location is great, it is not their primary business. The service we received was fine, but since most of us don't move often, a little extra explanation of how things work would have been good. Also, the dolly we rented was not available for pick-up and we reported minor issues (e.g. cracked windshield) to your customer service phone rep.

This was a terrible location. The service was terrible.

The clerk, Nash, was rude and took 30 min. to check me out. He said I had to wait until no other customers came into the gas station. He clearly doesn't care about uhaul customers. What an ass!

The location was terrible. The manager of the store had no clue what he was doing. He didn't know I had made a reservation. He didn't know how to drive his truck. He didn't even know where to look for the mileage on the truck. He wasn't there when I arrived and wanted me to wait an hour when he was due to come in. If it weren't for David Capote (the regional manager), I would never have been able to complete my move. THANK YOU DAVID! As it was, I rented a truck for two days without signing a single document. It's a good thing I'm an honest person.

This hour of operation of this branch works perfectly for me. They were very helpful and kind.

I have moved 4 times in the last year for work. The only reason I use Uhaul, is you are the only one around. The customer service is terrible, the people handling the transaction itself on site, terrible. Uhaul, the worst moving experience.

Horrible service. Had no clue what they were doing bi had to get behind the counter and fill in the information myself.they didn't even have a printer to give me a receipt.

i requested a dolly and there was no dolly provided. that made the job a lot harder. also when i returned the truck i asked that the 7 dollars be credited and they told me that it was not possible to so that. so basically i paid an extra 7 dollars for nothing and moving big stuff was harder with no dolly. its not the 7 dollars that i care about... its the principal. p.s. the location was great and the people were nice so i would recommend it to a friend but my only grievence was the dolly situation. normally i wouldn't complain, but some of my stuff was real heavy and bulky.