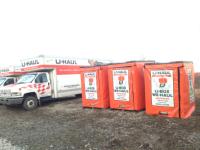 This location was 45 miles one way, out of my way from my original pick up location. Then somebody entered the mileage into the system incorrectly and I could not complete the inspection from my mobile device.

Nothing. The service and truck was excellent!! Thanks for everything!

The trailer was extremely dirty and caked with mud and gravel. I had to pressure wash it. But the people were courteous and helpful.

Nothing. Amanda was excellent. The crew at 10 minute oil change are terrific. We had an issue with the strap coming off front car tire on the carrier. We had a quick stop at another uhaul location on our trip. Leroy made the fix and no problems the remainder of the trip.

Lights didn't work. Tires had deep cuts in the tread. Different uhaul location stated the two dolly wasn't safe for a 1500 mile trip. Tow dolly made the trip with multiple stops and inspections.

I was told to initial a paper for insurance purposes (since I bought the insurance package). When I went to return the Uhaul I was charged a $25 cleaning fee for the cab being dirty. The paper I Initialed was apparently saying the uhaul was clean but the cabin was never even checked by the girl who had me initial. Even the lady at the drop off location said the uhaul looks like it had many trips to get that dirty. It's ridiculous that I was charged a fee for cleaning when it was extremely dirty when I picked it up and I didn't even have anything in the cabin.

The excellent rating is related to what I needed and its close proximity to where I live. This is a small satellite U-Haul site, but if you just need a standard 15' truck close to home, it can't be beat.

Picking up the rental truck at Delmont Ten Minute Oil Change was an efficient and easy process. No problems at all.

Directions to location maddening via google. Very frustrating as actual location not the actual location as per directions on google. Wasted at least 30 minutes trying to find place on extremely busy highway separated by concrete barrier . Also I reserved trailer 3 weeks ahead through the 800 number I had to pick trailer up 32 miles from where I needed it even though there was a location 2 minutes from where I actually needed it.

Sales person was courteous and helpful. Service person was rude, unpleasant, and slow.

1) I called "Monroeville" location, 5 minutes from my house and made reservation. Next day I was told pick up was Delmont which is 20 minutes away. Apparently I was talking to central location, not the Monroeville store, but was told equipment would be available. Was not convenient location as have to make a U turn to get on that side of highway. Plus added travel time each way. 2) Check in process was fine but was told trailer was muddy, too cold to clean it. It was not acceptable for hauling furniture and mattresses so my husband spent time mopping it out / drying it before we used it. More time spent unnecessarily. Trailer was good for our needs but would have thought with almost a weeks notice could have been brought to the convenient location and cleaned.

Reservation was switched from Monroeville. When we arrived there was no dolly. We had to go to other Grbg location to get folly. Poor communication!!!!!!!

The location listed on this survey form is no the correct location. I picked this truck up at Sadler auto sales in Indiana Pa. The experience of renting from Uhaul was HORRIBLE. I had a reservation to pick up the unit at 2 pm. Upon arrival there was no truck for me to have. The store called the area manager to let them know. The area manager said he would call back in 2 to 3 minutes. After the store called and them and the area manager spoke another 2 to 3 more times and 45 minutes later with no resolution or solution, I asked if I could speak to the area manager. He stated they don't know what happened. I said, "well with computers, you should know where on is at and get here", He said he did not have access as he was travelling. I then was told there is a truck in Delmont and if I could pick it up. That when I said, you need to do your job, find a truck and drive it here if you have to. That is what he did after I told him what to do. We received the truck about 2 hours later than our reservation was scheduled. I will never recommend Uhaul to anyone

The girl that waited on me couldn't be nicer!! She waited for me to arrive at 4:00 on a Saturday! She had a smile on her face and pleasant as could be! I didn't leave till at least 4:15. She went above and beyond!

Originally, I called uhaul around a week before the move hoping to get a 15-20 box truck to move from swissvale, pa to greensburg, pa. I wanted to rent one near where I lived and drop it off near where I was moving, but didn't mind bringing it back to the same location as long as it was close. As there are over 10 uhaul stations within the area I was moving to and from, I did not think this would be so difficult. However, uhaul finally calls me the day before I need the truck and want me to drive 20 miles in the opposite direction on the other side of Pittsburgh through the city to pick up a truck and then charge per mile. There are literally at least 25 uhaul places closer. Realizing that this would leave me with either leaving my truck an hour and a half away from where I was moving to at the uhaul place, or having to drive the uhaul truck all the way back there and get charged for it, I decided to take it upon myself to try and find a truck by calling shops individually. With no luck, I had to settle on a 6x12 trailer. So, while my ford ranger is straining to pull the trailer with all my belongings, I pass two uhaul shops (Monroeville and greensburg) and they both had the trucks I wanted to rent on their lots. Why in the hell couldn't I rent those? What a terrible headache that was trying to use uhaul.

Place a sign near the entrance to the U-Haul office. Once you pull in the parking lot it is hard to know where to go.

Great location, convenient to our home. Nice people there.

The day I moved was VERY rainy & muddy. I was charged a $25 "cleaning" fee & when I called, they said that there was mud ON THE DASHBOARD!! Not even POSSIBLE!! THEN, they said it was mud inside the back of truck from our shoes.......again..it rained! I called & spoke to a very rude manager?? at the location & he flat out REFUSED to refund the fee!! NOT a good way to get return customers, OR new ones!!

Directions to the facility would have been good. We went about 10 miles out of our way to find it. Also signage was poor, meaning it was not visible until we were at the location.