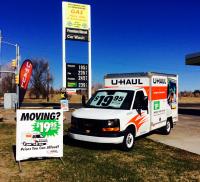 This location is essentially not staffed but I used the online pickup system which had several issues as well and took almost an hour to complete the rental process. This was not the location I requested but was sent to due to a lack of available trucks. I would not recommend it to anyone, old rundown gas station with bars on the windows, not welcoming at all in a rough neighborhood.

Getting the uhaul was a nightmare. It took me an hour because the person at the location can't help you and the app didn't provide the right code to get the key. The key wasn't in the right location. In all, I called customer service twice and wasted an hour doing it.

Management had to come to make it better

Say where to actually park the truck. I assumed just in the lot of the small gas station. There were no other uHaul trucks or signs so it was confusing.

Truck was dirty, and this was the 3rd location I was sent to get my truck

The price was way to high. I'll just use Home Depot next time

I have rented from U-Haul for over 30 years during which time I have always been pleased except for my most recent experience. I had a reservation (26607599) on November 10th to pick up a 17' van at U-Haul at Westminster (8001 Federal Blvd, Westminster CO). When I got there, I waited an hour to be served, they did not have my 17' van and when I tried to rent a 15' van that they had available, their computer system crashed and I left after two hours without a rental van. They did not honor my reservation and their service was the worst I ever experienced from U-Haul. I will never return to that location and if anyone asks I will tell them to avoid U-Haul at Westminster. I called your 800 number to complain and was told I would receive a $50 check for not honoring the reservation. The check has still not arrived. I was also referred to your location at 6990 N. Federal, where I was successfully able to rent a 15' van.

I was over charged for my rental. The place that I set up reservation at overbooked and did not have enough trucks and I was forced to rent from some shitty hole in the earth gas station. The guy who assisted me with the check I was sketchy and did not record the information properly for mileage and miles. When I asked why he stated "no one can prove it". This was the worst experience of my life.

The truck was in good condition overall, but the back of the truck was dusty with dark, fine dust inside. The rental facility has a lot of smoking paraphernalia which makes it feel more like a head shop than a convenience store, but the people that work there are friendly. The location is very convenient for me (close to home), or else I'd likely go somewhere else.

Attendant was extremely rude when dropping off. He said he wanted to go home and I would be sent a final bill by email tomorrow. I explained to him I wanted a hard Copy receipt had to argue just to get one. Not very customer service friendly at all the man also made it a point to show off a pistol in his waistband I was very uncomfortable with the whole situation.

Express check in does not work

The U-Haul was not clean when we picked it up, but that was not a huge problem for us. But we do bring a broom with us and it was clean when we dropped off. However when we pick it up it was very very slightly over half a tank of gas. (The indicator was still touching the half tank line ) The man who sold it to us told us not to overfill it because there is no refund and just bring it back with half a tank. When I returned it there was a different person there and he said it was not over half a tank â€œenoughâ€. The indicator was not sitting on half a tank it was sitting exactly where it was when we picked up the truck. we tried to explain this to him and he said because it said â€œoverâ€ half a tank he had to have us return it with more than half a tank. This Became a losing battle of semantics since the indicator was clearly over half a tank. So we were given the option of purchasing more gas to get to the point he liked it or him charging us ridiculous amount for gas. We put in $2 dollars more. And this brought it to a point he liked .We have used in the store before and the other fellow has always been the one we have interacted with and he has always been incredibly amenable and helpful.

Make sure the windows are clean so people can see.

I was contacted after reserving the truck online. The lady said I'd get special pricing if I were to return the truck to a different location. I agreed. Time came to return the truck. I arrived on time and was told by the lady at this location that they did not have room for the truck I was returning. I in turn had to make calls to get this problem solved. Then I had to return the truck to the original store that I had picked it up from. This store is across town. Also since I wasn't returning the truck to a different store, the deal that was offered to me was no longer valid. Then I spent more time driving to the original location, and had to put in more gas to insure it was full upon return as to not be charged. This in turn, turned out to be a very time consuming and expensive. Then after all was said and done no one ever contacted me in regards to the "mix up" even though I was assured that someone would. Extremely unprofessional and a complete waste of time and money.

Fast and friendly service. Truck was clean and no issues.

Are you kidding me. One hour yup 1 hour to get my rental truck. I even pre reserved it on the phone gave credit card info so I could just pick it up at 68th and Federal in Denver. Store busy. No. Truck there. Yes. Computer issues maybe. Talked with Uhaul, one lady even hung up on me when she told me the price was 89 bucks when I told her that my quote on my reservation showed 63 which by the way was correct. Finally got "Bug" fixed and was on my way an hour late. Then Murphy's law took over. CAR wreck on the exit ramp 8 cars in front of me. Locked up all traffic could not move for 45 minutes. Don't sound like a lot of time but there are two people waiting for me at the other end to get this move done Thanks U-Haul

The best customer service I have ever received!

Gentleman waited on 5-6 other customers who came in after me. It was a hot day and I was in a hurry to pack the truck, and had a sick person and a baby waiting in the other car with me. Nothing was explained to me about the truck, esp. the fact that it would only reach 70 mph on highways. Not very personal, although I realize there was only 1 attendant at the desk. Truck was in good shape, easy to operate

Windows not clean, and there were only 4 pads instead of the 6 or 10 I expected. But the manager did give a hand truck free of charge for compensation of waiting to process the contract.