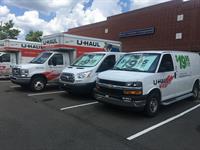 Half a tank of gas. Dolly wrong size still charged

I will not recommend U-haul at all because I made my reservation on 10/16 to pick up at the Cornwallis Rd./Durham location. On the morning of the 24th, the day i was moving, I decided to log into my account and add a dolly. When I went to pick up my U-haul that morning, they informed me that they did not have the van I reserved and that I would have to go to the Page Road location. Not happy, i drove to the Page Road location, which is also a furniture consignment store, where the owner told me, I was luck he was there, because he is not always there Saturday mornings. He just happened to be there for some furniture business and had no idea that i was coming and that my reservation had been moved to his location. He was nice though and he processed my reservation. The van was fine. No problems. My issue is in that I chose the Cornwallis location because of its proximity to where i am moving and so that I would spend less time/miles/money. Moving my reservation messed up all three of those factors and therefore cost me more time/miles/money.

the check engine oil light and low tire pressure was STILL on in this rental van. We rented the same vehicle last weekend and had the same issues. Also at time of pick up it was a disaster. I had a reservation for pick up at noon. I called and spoke with the owner at pick up place Friday morning and asked to move pick up to 2pm. He said that was not a problem and wen we arrived at 130pm we were not able to pick up as it said our reservation time had passed. He admitted that he did not move the reservation in system to 2pm so therefor the system showed my pick up time as missed and unable to check in. From there it all went downhill and would like a phone call so that I can explain what happened from that point. Thank you!

The only thing was there was a low tire pressure warning in the Van. It was raining during my rental and that could be an issues. But the van was immaculate

hire employees instead of a stupid ap.

When I went into the office know one was there we had to wait for the worker so we had to wait for him to show up so we received the equipment a half hour late, also when I asked how long is the process he said he was doing me a favor by even being at the store

The cargo area smelled like urine. You couldn't tell until you got inside but a very obvious smell. Also this was the first time I'd rented by phone. It would really help to manage expectations for this process. There's no one there so you can't know that you're waiting over 20 minutes to hear back from agent for confirmation because they're all so busy. I called the 1-800 while waiting for confirmation and that was a 15-20 minute wait so there's no one available to explain. We got there a little before 10:00 and we were leaving at 10:30. Just a lot of time when you're sitting on the curb waiting to find out if everything is ok or if you're moving plans are on hold. And the business owner who has the trucks to rent can't help and wasn't very interested.

The vent in the drivers side cab was wonky.

A little difficult to get instructions from them over the phone. But the drop off process was made easy for me

The manager is rude and refused to come to give us the keys for 45 minutes.

The U-Haul phone application is not good at all. My checking took a whole lot time then needed. The application is not intuitive and there parts that were not working. The camera part of the app was a joke. It gives you no control to adjust the quality of the picture. I wasted a lot of time that I did not have. People need yo have the opportunity to enter a lot of their information before getting to the site as there was no shade there.

The owner of the drop off location actually called me after I dropped it off and began yelling at me because he didn't want to deal with uhaul trailers, only trucks. He actually demanded I go back and take it somewhere else. Then hung up when I refused. What is going on!?!?

The online process was a bit daunting, but overall the experience was good and efficient

I made a mobile check in reservation. No trucks in my size were ready for pick up. It took 40 min on hold to reach customer service.

The collection point is not manned. When I arrived I had to call a number, shown on the door, which no one answered. I tried calling the number a few times and eventually I received a call back. It took the agent another 10 minutes to arrive and then go through the whole booking and validation process - result was a 30 minute delay. Not my cup of tea!!!!! Never again!!!!!

I called to say I might be a few minutes late and the man called me from a completely different number and said that was fine but barely spoke english. We ended up being EARLY but he told me I HAD to do the check out online since it was only a drop off location and there was no one there to help...the check out took 10 minutes to complete and then it said I owed $22,000 and I had to re-do it, take the photos again etc... the process took us 20 minutes and I was charged for an extra day. I disputed it and was still charged. I had to go through my bank to get it taken care of. U-haul customer service is non-existent and they shouldn't allow someone to handle their trucks that screw people over and have zero interest or ability to help with returning a truck.