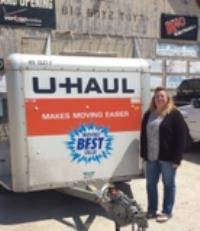 There was no one there. We called and then waited for someone to call back. When they did, they just told us to leave the trailer and they would take care of it. We took photos in case they said we never returned the trailer. Praying they marked that it has been returned.

The owner went far and above his job and picked up our tow dolly at a local car dealership for us because our vehicle transmission completely broke down. We were unable to return the dolly ourselves. He was very quick to answer the phone calls, as well.

We were not notified of the proper location. I was sent to Big Boys Toyz and not open. Then sent to lil' Mays gambling parlor to pick up car trailer, lady working had no idea how to hook up trailer. I had to hook up and send pictures to zone supervisor Jeff. Absolutely terrible service, then was over charged for rental...original contract said $55, was charged $85 +$22!!!!! I had to drive uhaul truck from Pontiac Illinois to Dwight Illinois to get car trailer. 25 miles out of my way!!! Although zone supervisor Jeff was very nice to me. Why should I use Uhaul again?? Then when returning truck and trailer was sent from Waverly Tennessee to Dickson Tennessee then to Fairview Tennessee!!!!! Come on people!! I am NOT a happy customer!!!! !!!!!!!!I deserve a refund or something here!!!!

Put key in lockbox and called to confirm the next day.

This was quite possibly the worst rental experience I have ever had. On the way south I stopped at my chosen pickup location to check on the trailer and its availability. She was unable to give me any real concrete any information due to how your system is set up and could only say that she did not have a trailer currently and did not expect one in and that I would be contacted a day prior to. I took that for what it was worth and moved on. On a good note, I was contacted two days prior and told that there would be one available and that due to the pickup location being different that I would be given an extra day at no charge to accommodate my inconvenience. While it wasn't a perfect scenario, I appreciated the effort and took the offer and moved on again. Here is where it begins to get ugly. I contacted the pickup location the night before and left a message to verify its availability since it was out of the way from my original pick up location and did not want to drive the extra distance without knowing it was there. It was after hours so I did not expect a call back. I did the same in the morning but apparently it was before they opened but even after they did open, I still did not receive a call back. I called again after they opened and was told yes, they did have a trailer and would be waiting for me. Good deal rightâ€¦. wrong. I drive to the location where the text said to go and what was listed as Big Boys Toyz. That location is no longer a U-Haul pick up location. It was a small business in the middle of a cornfield and fortunately and though it was closed I found someone working outside who said it was at Lilly Mays a couple of miles back into town. I was not given an exact address except that it was by the McDonald's. Small town only one McDonalds should be easy rightâ€¦Wrong. I am literally parked in front of the McDonald's do not see it and called again, I told her where I was and she gave me instructions and I followed them. No U-Haul that I could find. Since it seems apparent that not even the employee knows where she is located, I did an internet search for Lily Mays. I found a place called Lily Mays Gaming and thought ok well let's try that. I drove to that location and low and behold it was not more than 50 yards in a little strip mall not from where I was sitting. There was no sign and the two trailers that were there were at the end of the building and not easily visible. At least I am there should be good rightâ€¦wrong. I go in and begin to talk to them and apparently, she is having computer issues and cannot process my order. I wait 20 minutes while she tries to figure it out to no success. So, I say how about I go get the trailer hooked up myself and you can keep working and perhaps by the time I get back you will have it handled. So, I go and get the trailer and see about hooking it up. Should be easy rightâ€¦wrong. The chains hooks do not fit through the hooks on my hitch and the bolted chain rings have loc-tite on

I was treated like a king. I could not be any happier than I am. Big Boyz is the best. Also U-Haul went above and beyond to see that I was taken care of

Give me my Uhaul where I ordered it. Answer 800 number promptly and fix your website very poor cannot do updates.

Friendly, helpful and easy to check the equipment in.

after calling 800 number I resurved a tow dolly I was told at first it was at McCoy marine in coal city .called to veryfie and were told didn't have one.called back 800# then was told it was in Dwight. so called Dwight and it wasn't in called back 800# and was told supervisor bringing it personaly to Dwight THANK YOU.now feeling quit relieved again thank you saved me a lot on towing charges

Helped us tremendously throughout our move.

Stephanie was very helpful and professional

I asked the lady who set it up if they would have a tow bar and a ball to attatch to my jeep. Big boy toys is where I picked it up and they didn't have a bar. I had to drive around Dwight for an hour to find one. Other than that everything was smooth.

Friendly, helpful staff. Close location for pick up. Was in and out in no time at all. Wish I could give more than 5 stars!

It was great the people were reslly helpful and courteous

The lady at the front desk was extremely helpful and very easy to work with. Great experience.

We were told to have the trailer back by 4:40 at our drop off location on Saturday. We dropped it off before noon and good thing because they closed at noon. Need to verify hours at other locations.

They never came out of the office to look over the equipment. They did not sign the return agreement. They told me to take it out to the lot and drop it off. In front of the office door was a big muddy mess you had to navigate around. There were two loose dogs by the front door.

We dropped off truck on a Sunday and location was closed and we received either a text message or email advising truck was inspected and was returned back in good conditions just like when truck was picked up.

Have a bigger selection in Illinois.

This location was excellent..however uhaul them self was rude i reserved a 20ft truck this location had one coming in uhaul sent it somewhere else so i had to use a 10ft truck that this location had there...when i called to talk to uhaul the guy was VERY RUDE!!!!!!!!! if u tape the conversations like u say u do then listen to it.....He is not a people person at all and u haul should know when they have a reservation made a MONTH ahead of time where their trucks are and where they are going....just saying ....9 months ago uhaul did the same thing to me when i rented a truck for my son to move i reserved it 2 or 3 weeks ahead and had to drive 40 miles to pick it up and 40 miles to take it back..i was not driving 35 miles to pick up a truck when i reserved it a month ahead 5 mile out of town...i will question if i use uhaul again or reccomend uhaul...the location place at Big Boyz toys was awesome they were so helpful and she tried getting the truck and she was very nice and did a outstanding job.....UHAUL could take some lessons from her....just saying.....i am moved and i am glad it is over....

Nothing it went very well

This rental location was not convenient for me. I had to drive 20 miles each way for pick-up when there are three or four U-Haul rental locations in my town.