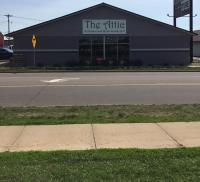 The lady who worked at the counter did not know how to do her job, didn't want to inspect the U-Haul with me before I left and also didn't know have the gas completely full. She also insisted that she had to take pictures of my credit card to send them to the person that would run them and that she couldn't just have me tell her the numbers. She also didn't want to see proof of insurance. Then the lady that she had to call to run my cards for payment tried to charge me for insurance that I had already said I didn't want and claimed she didn't know how to remove it. Then she called the regional manager and told him I took the U-Haul and was refusing to pay the full amount. So he called me and told me I needed to return the U-Haul if I wasn't going to pay for it, which I responded to in a very shocked voice saying I had paid for it. And then he told me what Megan had said and I explained the actual situation, and my boyfriend also spoke with him and told him that everything I said was true. Then the regional manager was awesome, I wish I remembered his name, and he took off the insurance charge, refunded me an additional $50 and said I only had to return it with the gas tank half-full.

Overall the trip went well! I have one request, I was charged $40 for insurance that was never mentioned to me. My auto policy covers Uhaul vehicles and I would like a refund for this coverage charge. If someone could follow up with me via email BobbyKelsey@gmail.com or 815-531-7786.

It was closed. I did the online drop off.

I ordered blankets and utility dolly that weren't in the truck.

Nothing that I could think of

When I picked up my equipment, only the truck was at this location, I had to drive to another location to get the towing trailer. This location charged me for the dolly, but never supplied the dolly; the place where I picked up my trailer gave me a dolly. The person who checked me out at this location went into a back room to make the transaction, never allowed me to go back there, never walked me through the rental process to know my preferences, overcharged me $70 for the damage protection, which I had already declined when I made my online reservation, I had to ask for the person to do a walk around of the truck, they never gave me a rental contract or receipt, they took pictures of a damaged area of the truck per my request, but not sure they uploaded the pictures, the $70 overcharge over-drafted me by $40 in my account which caused a $29.00 overdraft fee, which was not reversed. Nice store to buy used items, but not equipped for renting u-hauls.

Staff was not knowledgeable and were RUDE! The overall experience with U-HAUL was a nightmare and will not likely use this company in the future.

The directions to the drop-off location were a bit confusing since it was not the exact address listed. Fortunately we saw the other Uhaul equipment around the corner.

Clean the truck prior to customer taking it. I had to deep clean the vehicle it was so dirty inside.

Truck was dirty and items not all available and the dolly that was was not secured.

No clear parking area for uhaul. Parked by open dumpster and broken furniture from the store.

I feel they need to have more U-Haul signs and details on their door for after hours drop off. Otherwise the place is great

Little confusing on where to actually go to pick up the vehichle. Was not well advertised . Once figured it out people were very nice and helpful though.

Everything they quoted me ended up tripled as expensive in the end. We paid extra for them to pack us up too, didn't quote us right on how big the truck needed. We ended up needing two trucks instead of one. They said at best We might need an extra trailer never mentioned needing an extra truck. We could have been stuck with out an extra driver or having to get rid of stuff. We ended up paying double on labor hours with extra help from family to pack the truck. Was only suposse to take 4 hours, it took 8 with extra help from family. We even made it easier having most of it on the main level or in garage. They told us that would shave extra time on labor even more. Screwed up the reservations. Had to pay a penalty for turning the truck in late. He didn't make the reservation right. Made the first truck right not the second one. They didn't take extra care of heirlooms after constant reminding them. Then associate lied about it. Had I not caught it, they would have been broken in the move. Very nice people to work with initially.... won't call you back after you get sucker punched one last time with a penalty of late charge for their reservation error. Thanks The Attic... you over all tripled my moving bill and take no responsibility for it. They were happy to take my money and with a smile in his voice...."God bless you!" Go some where else! Save yourself the extra stress! Very unhappy! Very dishonest people!

When they called to confirm my appointment , I heard the staff on the phone talking crap and the man on the phone said â€œ what the fuck â€œ while speaking with me , they also said my card would be charged at drop off , they charged my card $62.99 right away and then at drop off tried to charge $52.99 more , I went less than 22 miles in town only . They also did not check the gas and charged me $33 saying I didn't fill it back up when it was exactly at where I got it ! And not only that I made my reservation online , they texted and called me to confirm it , and when I got there they had lost it and didn't have the size truck I needed ! I've used uhaul twice in the past two weeks and both times have been horrendous so far . I recoomand going else where !