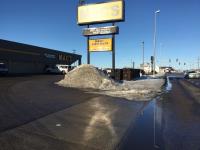 Decided not to waste any more of my time to write this review considering after the problems i dealt with theyve most likely took years off my life already . NEVER AGAIN . AVOID AT ALL COST .

Ensure computer systems are communicating with each other. Took over an hour to get checked in even though my registration was done the previous evening. The team member had to call various U-Haul sources to get it resolved.

Online rental and pickup was absolute garbage and took at least 3 times longer to actually get completed than it would have just doing it in the store. Will never, ever, ever use that again. Not the store's fault, just a horribly designed system.

Macs hardware was a great location. Uhual's website and customer service on the phone is absolutely horrible. The location itself was great. But I would rate Uhaul as a company poorly for them having to deal with its constant complications.

They told me I could pick up truck early went there and they were not even open till noon. Have me wrong truck size. Told them I may need truck a day longer when I rented it never said anything about a price increase if you added on. Not a happy camper....

They did ask if I needed help to hook up the car trailer and that was it. The truck had electric overdrive that I discovered. They did not have moving blankets. And when I had a problem with the truck on the road they were no help at all.

I reserved a car dolly. When I came to pick it up you didn't have one. Your staff seemed confused and unsure what to do. They gave me a car hauler that the lights didn't work on. After wasting a lot of time they got the lights working. Turns out, my car wouldn't load onto that hauler. I didn't know this car hauler wouldn't work until I tried to load the car on it. I had to bring the hauler back. Then a manager found a car dolly at a different location. After wasting 3 hours of my time you finally got me a car dolly. When someone reserves something you should have one for them. That's the point of a reservation. I tried to explain this to your staff but they seemed unwilling to listen. I was overwhelmed by the incompetence the staff at Macs and your 13 Ave location showed.

Please update the list of car models. They kept telling me over phone that my truck would not be able to tow what it was that I needed to town, because they could not and did not have the right car model in the system. I called 3 times with the same guy telling me it wouldn't work. Finally on the 4th time, a different guy picked up and finally made it work. It was a headache trying to rent this auto transport trailer.

Trailer worked just fine. The only surprise was that I brought my 2" ball hitch and was told it's a 1 7/8". I think hauling a vehicle requires a 2" could you please check this out and let me know. Thanks

Leaving the Main Ave store in Fargo after checking on our truck reservation my wife tripped on something sticking up in the parking lot and fell bruising her shoulder, elbow, both knees and cut in her hand. I asked U Haul employee for help getting her up he was not concerned, didn't ask if she was hurt and just said they were going to fix the lot last year but didn't get around to it but should do it this year. We asked for a first aid kit for the cut on her hand, elbow and knee and after what seemed a long time he came with a band aid.

The fuel tank was marked as full and it was not! I drove the truck 16 miles and had to put 6.5 gallons of gasoline in when I returned the truck. The fuel tank not being full was brought to the gentlemanâ€™s attention prior to me leaving the lot but I was reassured that the truck was full of gas. This cost me $18.00 where it should have only come to $5.00 maximum to refuel the truck when I turned it back in. I was pissed but I was not going to take a chance and get changed U-HAULs price for fuel! NEVER AGAIN WILL I RENT U-HAUL!!!

I was not contacted where to pick up my truck

Make sure that the order is checked. We were missing 3 items we asked for and it wasnâ€™t noted until we had left. It took 20 minutes to get checked out. Not enough help present at 8 a.m. to process orders and run the store.

Yes, but the workers were understaffed and the UHaul register was not marked.

We waited for an hour but to get the truck and they had to cancel the order a few times and start over. On a reservation it should never take that long .I am extremely upset about this issue as I was on a time frame and this set me back and caused me to be late for arrangements that I had made.

I reserved a 15â€™ vehicle and was supposed to pick it up at a location close to me. Once I got there, the guy said it wasnâ€™t there and they donâ€™t have anything left; He said it was at another location instead. I drove to the other location, which was all the way across town. When I got to that location, they said it was at another location. The third location had no signage or anything to indicate they had Uhauls(itâ€™s a MACS hardware store) We had to go into a hardware store and ask a cashier about this. Once I got the Uhaul, they didnâ€™t include the dolly I ordered and said it wasnâ€™t their problem. In the end, it took over an hour to drive to the three different places the Uhaul was supposed to be, and no one even apologized or offered to do anything to help. Absolutely terrible experience.

It took over 20 minutes for manager to come help me with the checkout process, and they weren't familiar with the system, so another manager had to be called over (another 10 minute wait). Overall, it took somewhere between 45 minutes to an hour before I was able to finally leave. Also, when selecting my drop off location, they weren't addressing my questions about why my original destination I chose when I made the reservation online wasn't available, and just chose one of the three available for me at random, saying "you can just call ahead and drop it off anywhere." I later found out that would be an ordeal in itself. They did say they were relatively new to renting U-Haul, but their staff definitely needs more training on the check-out system.