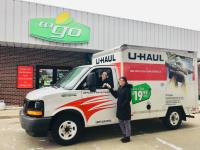 When I dropped the trailer off, they were not sure what I had to do after I dropped it off.

It wasn't even close to the location I was supposed to collect the truck at. The gas station was listed as permanently closed on goggle

The address on the Google maps weren't updated

Your customer service (800) departments are RUDE! And give FALSE INFORMATION! I canceled and then called backed the next day and finally got what I wanted. They were trying to send me way out of town to pick up a cargo trailer when there was one in town. They sent my cousin from Decatur, Illinois all the way to St. Louis, Missouri to pick up a truck and trailer. First they sent them to Springfield, Illinois and when they got there, there was no truck or trailer waiting on them! UNACCEPTABLE! This whole experience with U-HAUL WAS A BUNCH OF BS! Totally RIDICULOUS! If I can avoid it I will NEVER RENT FROM U-HAUL AGAIN! AND TO THE YOUNG CUSTOMER SERVICE REP ON THE PHONE WHO TOLD ME HE DIDN'T TO HEAR ME FUSSING SUNDAY MORNING, YOU TELL HIM APPARENTLY HE DOES NEED TO HEAR IT BECAUSE HE GOT UP TO COME TO HIS JOB! Since you record your calls you might want to retrain your customer service reps to deal with customers who have been screwed around that might be irate! If he can't take the heat he may need to find another job! That's coming from a person with a Management Degree! If he was my employee I would have ate him alive for talking to a customer like that especially one who has been treated wrong like I was. I had a right to be upset! After that I got transferred 3 times for no reason! AGAIN UNACCEPTABLE!

The woman helping get the truck was unfamiliar with the system, so it too much longer than expected to receive the keys for the truck and get on the road. Also the supplies at this site were lacking and I did not receive any moving blankets that were part of my order. (Note: I got a call the day before that the pickup location was changed to this site, as it was the only one that had a 10' truck available. So that may have played a factor.) The truck however was excellent and brand new. So there were both pros and cons to this experience.

My husband had spinal surgery and was in a neck brace a week before we were picking up the trailer. The place we picked it up from was dirty and poorly maintained. It took 45 minutes for the lady behind the counter to process the request. Some may have been problems on the UHaul end. No one offered to help my husband put the trailer on the hitch. When he came back in and said he needed help the gentleman (owner) didn't acknowledge him and the lady behind the counter said "Just load it". I went out to help him. I do hope that my husband does not have medical complications from this. He has a Dr appt today and will know if he sustained additional injury to his neck. Very disappointed with this location. It also is no longer located at a Phillips 66. The name has been changed but all the info listed showed it to be under that name. The lady behind the counter said I need to tell them about the name change.

This location was open and willing to accept the return although business hours listed them as closed. The staff was already preparing the paperwork when my husband walked in. While the location was extremely convenient to our needs, the facility itself was interesting. I'll stop there

Uhaul was dirty, customer service was lacking. Staff friendly but not knowledgeable. We were not told correctly the cost of the vehicle. When we reserved it we were told one amount, when we picked it up we were charged another amount, and when we returned it we were charged even more. We were told the extra charge was for mileage but we only went 8 miles farther than planned, which did not come up to the extra $33. It should have been less than $10. Once the higher amount was charged to our card, the "hold" placed on our account from the previous amount was not released for 4 days, tying up our funds. Overall this was a very frustrating experience.

It was a convient and efficient operation.

Pick up locations, I realize, are few and far between in central Illinois. First of all, I drove by this place 2 times before finding it. There was no signage at all. A Woman , who I don't believe had ever hooked up a trailer in her life, was the only person there. She was trying to run a gas station/convenience store/restaurant, by herself. She was knowledgeable about the paperwork, didn't know if she had the right Trailer and had no clue how to hook it up. ...Fortunately, I did, only because I had rented the same trailer a week earlier from A good U-Haul dealer in Michigan. You can draw your own conclusions about how to fix the issues at this site....respectfully, T Greer

Have the door unlocked or have a sign directing people where to go if they aren't supposed to follow the steps on the signs by the door.

The lady made two attempts to enter my information. When I left finally I received a call saying nothing got entered. I spoke to a representative Nolan who said I would get a discount when I returned truck. This did not happen. Very disappointed.

The staff was fantastic. The blankets I needed for waiting at the door for me. Great location, great staff!

Charged Me a FULL Extra Day for a Rental that was only 35 minutes late. Will not recommend this facility to anyone else. I feel Ripped Off.

Your associate was very respectful, courteous, and helpful. He needs to be acknowledged by the company. I think that if there is extra fuel in the truck, the customer should be reimbursed, as long as they have a receipt. This didn't happen at this store, but at the 5th St. Store in Oxnard, Ca. Times are hard as it is, to be giving away gas for free. Thank you. Alicia S.

Keep being friendly. This location had the greatest customer service I have seen in a while. I was treated with respect and both the receiving and returning process was fast, smooth and courteous.Thanks