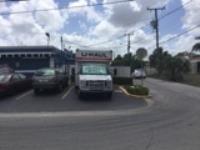 Poor customer service and poor communication. The Rep wasn't on time to do contract, which caused delay in moving, and Rep stated don't worry about been charger for been late, it will be removed. Yet, Uhaul charge an additional day , Never rent from Uhaul again. Gas meter on the truck did not work, found out afterwards when fueling. An horrible experience. Don't rent from the Blue Store, UHaul.

Used condoms on the back of the truck. Tabaco everywhere. Nasty, nasty.

I traveled only 4 miles and was charged $12 dollars for Gas. that Gas mileage per Gallon is a sign of poor maintenance and Borders on Fraud and A Scam. As a Representative for Legal Shield I am very disturbed by this and the panhandling I was confronted with by "Shay"at the Front door and Vagrants sitting on the bumper of the adjoining Truck smoking Dope in front of my Wife. Minimally Cameras should be on the side where the Trucks are Parked.

Place was not professional and the person never showed up on time. I had to switch to Phone device to get the keys. Plus I was charged Insurance which I clearly stated before renting that i was declining.

Customer service was not done and the client was charged a full day for just an hour and a half. I do not recommend anyone to use this location.

This location was not a very good one. The truck I rented was not well kept in the back area it had tobacco ashes all over and a used condom rubber. Inside the cabin area was not bad apart from from some drinking straw rapping paper on the ground and in the cup holder. this location had no printer and didn't give me a contract to sign did everything on the computer and over charge me for and extra day... Not a good location

The GM called me in regards to a complaint about the fuel charge. I had filled the truck to exactly how I received it but drove it a few miles from the store. By the time I get to the store to drop it off, the fuel reduced slightly, resulting in a surcharge! Never again!

There needs to be someone to "Check out" the vehicle i.e. the condition, mileage, gas level etc. None of that was done. I had to put gas in the truck and I was still charged for gas upon return.

When I arrived to the location I checked in and the cashier said they had no ink so he could not give me a copy of the agreement. I should have known something was up then. The trip I took was to my house to pick up a sofa (2.5 miles from The Blue Store) drop it off at my friends house (almost 1 mile from my house) then back to The Blue Store (right at 2.4 miles) so total should have been close to 6 miles. When I turned in the truck it said that I had gone 36 miles. This is not possible. So running some kind of scam. If this is how you allow your vendors to treat customers might want to re-evaluate this location.

They gave me the truck on a empty tank I put the gas back where it was and they charged me for gas no one ever went to inspect the truck before giving it to me I will never go back there very unprofessional.

This is one of the most shady place i ever did business with. They double charged me and is holding on to my money ... when i try to call them they all of a sudden stop answering my calls . will never ever ever go there again even if its free.

They are shady and I've never had a bad experience until this time. They are trying to take more more out of my account for no reason. I'm not authorizing this transaction.

No protocol was followed at this location, and this needs to be addressed. Did not receive a contract and was given a truck without the fuel being verified. This caused us to have to place more fuel back in the truck that what we actually received.

There were a homeless couple inside the cabin

When I went to the location â€œthe blue storeâ€ 19th street Fort Lauderdale Florida. The guy was very unprofessional he did not do a inspection of the vehicle the back door was broken upon arrival. The fuel in vehicle was one notch above â€œEâ€. He never checked the mileage I had to demand that he check things out overall having the U-Haul s station there for pick up is a terrible idea, for years my family have rented with U-Haul and I never seen something so unorganized.

The store was crowded and dirty. The u-haul agent wasn't able to answer basic questions and was misleading about pricing when I went in to confirm the reservation.

The neighborhood is very unsafe and I had locals harassing me for money. The owner of the shop was very friendly and helpful.

Very disappointed. Truck had items and metal inside. Location did not work with me regarding the miles I had to use to come back to have them clean it. Nor the gas was compensated!! Very upset.

WHEN I RETURNED THE UNIT, NO ONE KNEW HOW TO REFUND ME FOR THE MILES THAT I DIDN'T USE AND STILL TIL THIS DAY I STILL HAVE NOT RECEIVED MY REFUND AND I'VE BEEN TRYING TO REACH THEM ABOUT MY REFUND BUT NOTHING .... VERY POOR SERVICE

The guy at the Davie/Flamingo Rd U haul was extremely helpful. And that's where it ends! The service from the company is absolutely awful! I did not get a truck and ended up going with another company. Customer service was terrible! Terrible! Terrible! They were not helpful they did not call back when they were supposed to on several occasions. I highly recommend going to a different company.