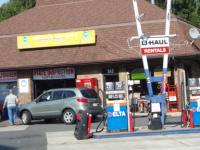 The two employees that helped me made everything easy and smooth

I would never use this location again. If it was my only uhaul experience I would never rent from uhaul again. I reserved pads, they didnâ€™t have any and made no effort to get me any. I got â€œso do you want the truck or not?â€ Truck wasnâ€™t that clean. No one came out to show it to me at all. I was told I could return it by phone because thatâ€™s how I rented it (the location was closed on Sunday). When I tried to return it by phone they told me I had to go online. When I tried online, it wouldnâ€™t go through because the mileage can only be input up to 99,999 when the truck has over 112,000. I had to spend another 20 minutes on the phone. All in all the location is awful. Never ever again.

The gas and MI reader is wrong when I pick up the truck! I added the gas more I used, still charge me the extra gas and also charge me extra mile. Terrible place, cheating staff!

They don't want to come customer. Bad service ever...

I called Uhaul and was told that location open 24 hours and when I arrived at the location I discovered that they don't have a dropbox or any instructions on how to leave the key... I left the key in the car and the next morning at 8-9 am I received 3 phone calls from the location wondering where were keys. And they intentionally processed my drop off way later the next day, as I Dropped it off at 7 pm instead of last night...And they charged me extra $40 for that. Ridiculous. If I knew I would've chosen a different location for sure.

Besides the 1 wet blanket everything was good.

They were personable and helpful.

The gas station is a chaotic place. The truck was parked in and it took them a while to find the keys to move the car that was blocking it.. They didn't have enough moving blankets. ( I paid for 12 and got 6). Nothing terrible happened but the whole thing felt a little dicey. I am glad I was able to rent the truck and there was nothing wrong with it. But I would not describe the overall experience as pleasant or reassuring.

This was not my original pick up location U-Haul sent me there and then I go over my miles by 1 and get charged extra mileage and it not the .43 cents itâ€™s the principal if you are making a person go way out of there desires pick up location that some courtesy should be applied..Mind you I was called to ask if that location works for me

Pro: Attendant himself seemed nice and personable, and was trying to help me Cons: location is TINY, hard for the driver who brought me to location to park anywhere --- hard corner location with a big truck to maneuver adjacent narrow streets ---- truck was blocked in by another car being serviced which took about 15 minutes for them to find appropriate key ---------- no walk-around inspection was done with me until I requested ---------- service blankets were not provided until I asked for them (I previously ordered them online).

I picked up a 10' van this morning for an 18 mile roundtrip move. My card was charged for the move and upon retunr to Main Street Service Center in Fort Lee (same as pickup location) I bought a gallon of gas from the same attendant. I collected the vehicle with 3 1/4 of the tank and with that top up I exceeded the gas upon return. I just noticed that I was charged an additional $15.75 for fuel and I called customer service a few minutes ago (around 7pm ET). After waiting on the phone for over 30 minutes, I reached a rep who was rude and very dismissive. After I explained my complaint he snapped back at me that "Well, they have you as returning the vehicle at 3 1/4 and it should have been full." I said no, that's not the case because I collected at 3 1/4, drove a total of 18 miles and returned with an additional gallon of fuel top up. He snapped at me and when I told him I thought he was being rude, he just HUNG UP. I am going to publicize this as a very rude employee absolutely puts a bad taint on my otherwise pleasant experience. I demand an apology and a refund of the excessive charge immediately. If I do not receive a response within the next 24 hours, I will contact American Express to dispute the charge in any case. I have ALL the paperwork that proves that this was either an error by the rental clerk or a deliberate fraudulent charge. Either way, your rep should have been more alert and responsive and ready to investigate to clear your good name rather than taking offense with me, the wronged customer!!! Please contact me ASAP.

This location was a gas station with little signage. I drove past it the first time.

PASSENGER SIDE MIRROR WAS LOOSE AND COULD NOT SEE MY RIGHT SIDE . EVERY THING ELSE WAS EXCELENT

NOTHING, EVERYTHING WAS EXCELLENT .

We had a 7am reservation and the employee was 2 hours late to open. On top of that, they were rude, didn't apologize and referred to it being the holiday weekend for the reason they were late. We ended up missing several appointments at our new house that needed to be rescheduled. Luckily, the customer service rep we spoke to that morning was very kind...but it was out of her control to get this location up to do their job. Horrible. Two hours is ridiculous.

I originally selected another pick-up location but they sent me here. This is a gas station w/ reasonable price (convenience for return fill-up). Even though I filled out everything online, they had me go through again there info such as "Do you want insurance?" & phone #s. Truck cargo area was clean. Cab area not so. Since I got the insurance, no walk around was done. But inside the cargo area, there was an extra charge blanket/padding package that had its content missing. I was worried that they would charge me for it. The transmission requires several seconds to engage. The brakes worked well but made a loud screech at low speed. Upon return, the boss(?) questioned me whether it was supposed to be return there. Why? He didn't have the space for it.

Just not a pleasent guy. Drove 35 miles added 10.00 in gas and hit grief. Told me I was returning at wrong location after I prioerly called and changed return. Maybe he was wrong or maybe CORPORATE failed to tinelybinform him ?

Service was poor. The guy who helped me was constantly distracted by other matters as he was typing in my information. It took over 15 minutues to finally get the key to the truck.

I Told The Guy On Counter For My Dropoff Location In Jersey So He Told Me Yes I Can Dropout In Jersey So I Believe His Words And Didnâ€™t Read Agreement Unfortunately According To The Contract I Sighn Dropoff Location Is Same As Pickup Location So Without Any Reason I Have To Send It Back & Pay Additional Amount By Miles Once I Talk With Them They Admit Their Mistake & Told Me They Request For Refund Amount I Extra Pay When I Call Their Office Guy Who Receive My Call Told Me Boss Is Not Here...

Necessary improvements include: 1. Having the right vehicle 2. Not charging me more for the wrong vehicle 3. Having a vehicle where the back locks 4. Actually providing the accessories promised 5. Not having staff curse at me that they don't "deal with uhaul s#!t" when I return my vehicle 6. Giving me my contract when I return my vehicle 7. Properly recording my mileage 8. Having computer systems that are up and working when I call customer service 9. Following through on customer service promises

I was billed because the Uhaul location didn't have extra keys as they should and I locked the vehicle as instructed by Uhaul customer service.

The location was small with very poor customer service. We waited for about 20 minutes for someone to even come and rent us the uhaul, then the requested equipment was not available the customer service person refused to check any of the nearby locations to see if they had the reserved equipment. Would not go to that location again.