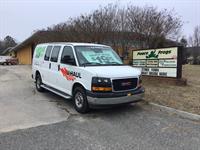 I paid for a dozen furniture pads and received none. There was a large puddle of water that had frozen inside. I could not get anyone to help me.

The electronic pick up with the cell phone was not easy. I don't know if the location and reception was the problem or the program but many times when I made an entry the screen return to the first screen. I have had a lot of dropped calls in that area of gloucester. The procedure that should have just taken a few minutes turned out to be very lengthy and frustrating. I won't rent from another unmanned office.

Location is in cell phone dead spot which complicates the process. Website did not explain where lockbox was located which was a problem. Requested a dolly and that was not on van.

No one would answer the phone. I call for 3 days.

Operator was snappy and seemed annoyed to be bothered with a uhaul client. The phone goes unanswered and, if you do get someone on the line, you can hardly understand the person on the other end due to a poor connection.

This location was amazing. It was easily accessible and the sales lady was beyond amazing and so friendly. I will be coming her for all my uhaul needs and will recommend others

The van wasn't clean. Although I uploaded pictures of the dirt/debris left by a previous renter upon returning the van I get asked whether the van is clean and ready for a future â€œfamilyâ€. I didn't want to be charged for returning a dirty van so I had swept out the van out before returning but was not going to fully mop out the dirt left by the prior renter. I don't think that if I rent an unclean van that I should have been asked if it was returned clean.

Needs better signage. Hard to see where the office is.

I requested in person pickup. Upon arrival door was locked. I could see people working inside who ignored my knocking. They wouldn't even come to the window to give me instructions. Just flat out ignored me. I called the U-Haul number in my email and they said I needed to mobile pickup. I explained I was unsure how to do that and preferred an in person. They said they'd send me a video. At this location there is no signal to watch a video. I had to find a signal to complete the transaction. When I got to key pickup, the only direction was â€œmiddle boxâ€. There was no indication where the boxes were. No signs. And of course no one to tell me what â€œmiddle boxâ€ meant. After walking around all business I found 3 unsigned boxes on a separate building from the office. I put in the code and my keys were inside. Then I got in the vehicle and noticed there was barely enough gas to get to my move out destination. All this caused me to be an hour late. Movers were on scene with nothing to move into. Also hung up on twice by customer service. VERY UNHAPPY WITH PICKUP EXPERIENCE.

The location was set well behind the building, so we had to drive around trying to get close to it before the uhaul app would register that we were at the pick-up location then we waiting for 45min for the approval process so we could get the key box code. Then none of the pictures were update of the vehicle to show the damage, so i had to then go around the whole truck taking pictures to record the dispute on the app. The truck also had less than 1/2 a tank of fuel. The whole process was unsat.

I did the app for pick-up and if the owner had not been there I would not have known where the key pick up box was. I would have it in a better spot. Otherwise, everything else was fine.

We picked up the rental van on off hours. It was not very clear where to find the key box. As far as the location and reserving the rental van, everything went smooth. On the other hand, when we picked up the van it took almost a full hour for the authorization to go through. And that's with doing the online registration prior to getting to the van location.

I dropped off the truck on a Saturday morning - on time, but the office was closed and there was no attendant there to check me in. I had to drop the keys in a mail box labeled U-Haul and hoped that it would be checked in honestly on Monday.

Vehicle had dried up mud when I got into it. I didn't have a mop or anything to clean it so I was charged $25 for the previous person's mess.

Update Your U-Haul Computer System ~,,~ This System Was Woooofully Slow and Unreliable ~ I felt very badly for your Representative at this Location !!!

Personnel at Peace Frogs were outstanding. Friendly, helpful and totally professional. Made this easy, effective and efficient. I'll be back here for my next rental.

Everything went smoothly, rental agent was very professional and organized. I was on the road in a short period of time to meet my moving helpers at my house on time.

After hour drop off. This location helped me with my reservation because they did not have the equipment available for rental. The two other locations in Gloucester had the equipment the equipment but were closed. Piece frogs location was extremely helpful and friendly.

i went in two days before i needed the truck and gave all the information and my CREDIT CARD. when the driver showed up there was no record of me even though i got an email from uhaul. he had to pay for the rental and i wanted it to go on my CREDIT CARD.

The truck itself was damaged, even had a busted side mirror which the guy at our drop off seemed angry at us about (it had X's showing it was previously done). The equipment rented wasn't in the truck and the pickup location wasn't open. We tried to call after they opened so someone could pick up the equipment but no one answered. We borrowed dollies and eventually drove to another uhaul facility to get blankets but we were charged for everything. The uhaul drop off was bizarre to say the least. We were going to do the app drop off but a rep came running out to "move the truck" and told us we couldn't do anything else because it had now been checked in so we were charged for cleaning (I guess because the blankets weren't folded) and $26 for gas because he wouldn't let us take it across the street). I have yet (in 4 days get a rep on the phone, only given one receipt for the gas/cleaning, and I was charged way more than I should have been. The only good things about this rental were our moving help and the rep I managed to speak to through online chat.